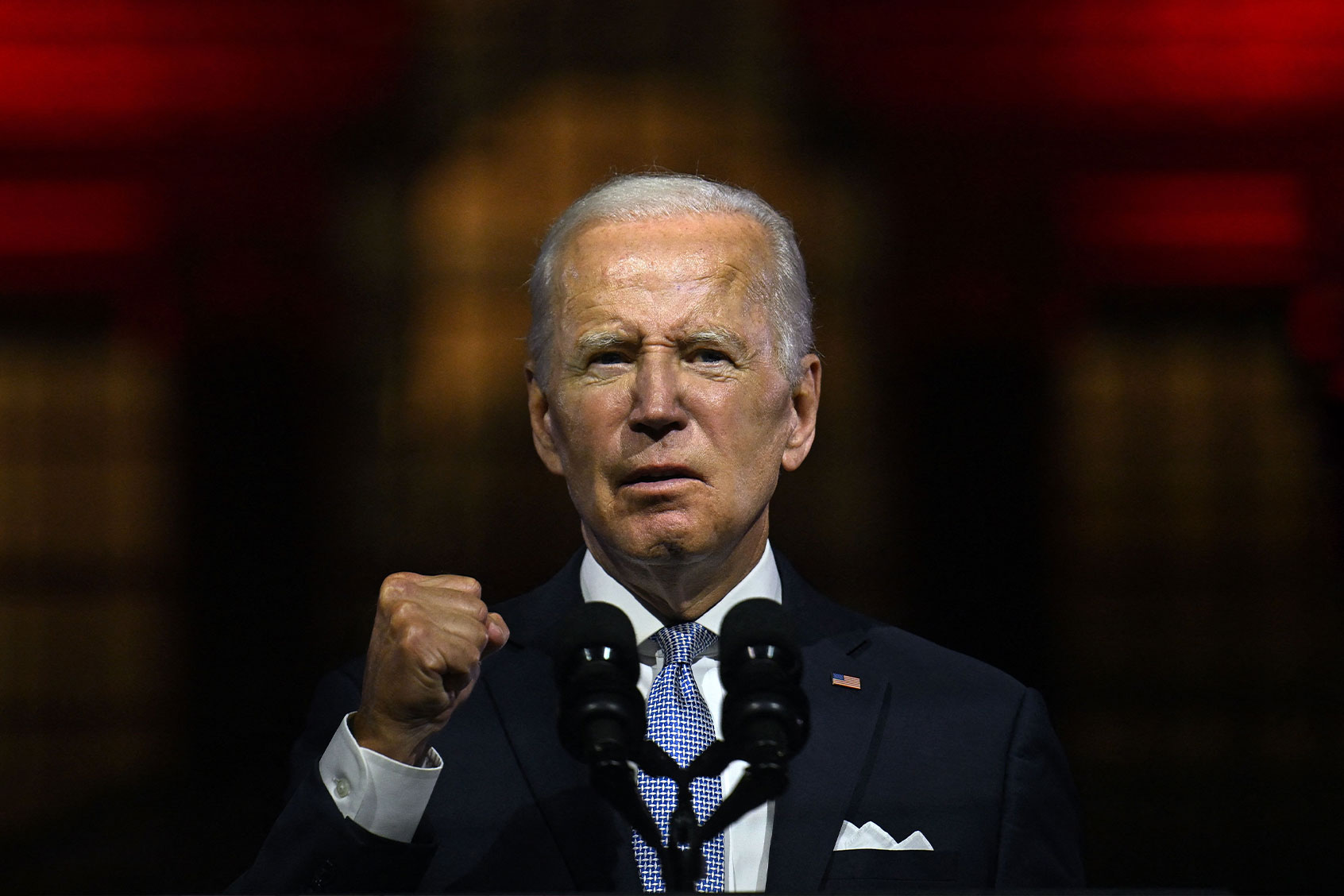 Can we stop pretending that America is a functioning democracy?

Can we stop pretending that America is a functioning democracy?

633
SHARES
1.4k
VIEWS
Share on TwitterShare on Facebook
There is a fatal disconnect within a political system that promises democratic equality and freedom while carrying out socioeconomic injustices that result in grotesque income inequality and political stagnation.

Decades in the making, this disconnect has extinguished American democracy. The steady stripping away of economic and political power was ignored by a hyperventilating press that thundered against the barbarians at the gate — Osama bin Laden, Saddam Hussein, the Taliban, ISIS, Vladimir Putin — while ignoring the barbarians in our midst. The slow-motion coup is over. Corporations and the billionaire class have won. There are no institutions, including the press, an electoral system that is little more than legalized bribery, the imperial presidency, the courts or the penal system, that can be defined as democratic. Only the fiction of democracy remains.

The political philosopher Sheldon Wolin, in “Democracy Incorporated: Managed Democracy and the Specter of Inverted Totalitarianism,” calls our system “inverted totalitarianism.” The façade of democratic institutions and the rhetoric, symbols and iconography of state power have not changed. The Constitution remains a sacred document. The U.S. continues to posit itself as a champion of opportunity, freedom, human rights and civil liberties, even as half the country struggles at subsistence level, militarized police gun down and imprison the poor with impunity, and the primary business of the state is war.

This collective self-delusion masks who we have become — a nation where the citizenry has been stripped of economic and political power and where the brutal militarism we practice overseas is practiced at home.

In classical totalitarian regimes, economics was subordinate to politics. Under our “inverted totalitarianism,” the reverse is true: There is no attempt to address the needs of the poor. They are exploited and thrown into debt peonage with no escape.

In classical totalitarian regimes, such as Nazi Germany or Stalin’s Soviet Union, economics was subordinate to politics. But under inverted totalitarianism, the reverse is true. There is no attempt, unlike in fascism and state socialism, to address the needs of the poor. Rather, the poorer and more vulnerable you are, the more you are exploited, thrust into a hellish debt peonage from which there is no escape. Social services, from education to health care, are anemic, nonexistent or privatized to gouge the impoverished. Further ravaged by 8.5 percent inflation, wages have decelerated sharply since 1979. Jobs often do not offer benefits or security.

You can watch an interview I conducted in 2014 with Sheldon Wolin here.

In my book “America: The Farewell Tour,” I examined the social indicators of a nation in serious trouble. Life expectancy in the U.S. fell in 2021, for the second year in a row. There have been over 300 mass shootings this year. Close to a million people have died from drug overdoses since 1999. There are an average of 132 suicides every day. Nearly 42 percent of the country is classified as obese, with one in 11 adults considered severely obese.

These diseases of despair are rooted in the disconnect between a society’s expectations of a better future and the reality of a system that does not provide a meaningful place for its citizens. Loss of a sustainable income and social stagnation causes more than financial distress. As Émile Durkheim points out in “The Division of Labor in Society,” it severs the social bonds that give us meaning. A decline in status and power, an inability to advance, a lack of education and adequate health care, and a loss of hope result in crippling forms of humiliation. This humiliation fuels loneliness, frustration, anger and feelings of worthlessness.

In “Hitler and the Germans,” the political philosopher Eric Voegelin dismisses the idea that Hitler — gifted in oratory and political opportunism but poorly educated and vulgar — mesmerized and seduced the German people. The Germans, he writes, supported Hitler and the “grotesque, marginal figures” surrounding him because he embodied the pathologies of a diseased society, one beset by economic collapse and hopelessness. Voegelin defines stupidity as a “loss of reality.” The loss of reality means a “stupid” person cannot “rightly orient his action in the world, in which he lives.” The demagogue, who is always an idiote, is not a freak or social mutation. The demagogue expresses the society’s zeitgeist.

The acceleration of deindustrialization by the 1970s, as I write in “America, The Farewell Tour,” created a crisis that forced the ruling elites to devise a new political paradigm, as Stuart Hall explains in “Policing the Crisis.” Trumpeted by a compliant media, this paradigm shifted its focus from the common good to race, crime and law and order. It told those undergoing profound economic and political change that their suffering stemmed not from rampant militarism and corporate greed but from a threat to national integrity. The old consensus that buttressed New Deal programs and the welfare state was attacked as enabling criminal Black youth, “welfare queens” and other alleged social parasites. This opened the door to a faux populism, begun by Ronald Reagan and Margaret Thatcher, which supposedly championed family values, traditional morality, individual autonomy, law and order, the Christian faith and the return to a mythical past, at least for white Americans. The Democratic Party, especially under Bill Clinton, moved steadily to the right until it became largely indistinguishable from the establishment Republican Party to which it is now allied. Donald Trump, and the 74 million people who voted for him in 2020, were the result.

It will do no good, as Joe Biden did last Thursday in Philadelphia, to demonize Trump and his supporters in the same way they demonize Biden and the Democrats. Biden, raising clenched fists, backlit by Stygian red lights and flanked by two U.S. Marines in dress uniforms, announced from his Dantesque stage set that “Donald Trump and the MAGA Republicans represent an extremism that threatens the very foundations of our Republic.”

Donald Trump called the speech the most “vicious, hateful and divisive speech ever delivered by an American president” and attacked Biden as “an enemy of the state.”

Biden’s frontal assault widens the divide. It solidifies a system where voters do not vote for what they want, since neither side delivers anything of substance, but against what they despise. Biden did not address our socioeconomic crisis or offer solutions. It was political theater.

Anti-politics masquerades as politics. No sooner does one money-drenched election cycle end, the next one begins, perpetuating what Wolin calls “politics without politics.” These elections do not permit citizens to participate in power. The public is allowed to voice opinions to scripted questions, which are repackaged by publicists, pollsters, political consultants and advertisers and fed back to them. Few races, including only 14 percent of congres­sional districts, are considered competitive. Politicians do not campaign on substantial issues but on skillfully manufactured political personalities and emotionally charged culture wars.

Politics is pure spectacle, a tawdry carnival act where the jockeying for power by the ruling class dominates the news cycle. The real business of ruling is hidden: corporate lobbyists, bankers, the war industry.

Politics is spectacle, a tawdry carnival act where the constant jockeying for power by the ruling class dominates the news cycles, as if politics were a race to the Super Bowl. The real business of ruling is hidden, carried out by corporate lobbyists who write the legislation, banks that loot the Treasury, the war industry and an oligarchy that determines who gets elected and who does not. It is impossible to vote against the interests of Goldman Sachs, the fossil fuel industry or Raytheon, no matter which party is in office.

Our corporate overlords and militarists prefer the decorum of George W. Bush, Barack Obama and Joe Biden. But they worked closely with Donald Trump and are willing to do so again. What they will not allow are reformers such as Bernie Sanders, who might challenge, however tepidly, their obscene accumulation of wealth and power. This inability to reform, to restore democratic participation and address social inequality, means the inevitable death of the republic. Biden and the Democrats rail against the cultish Republican Party and their threat to democracy, but they too are the problem.