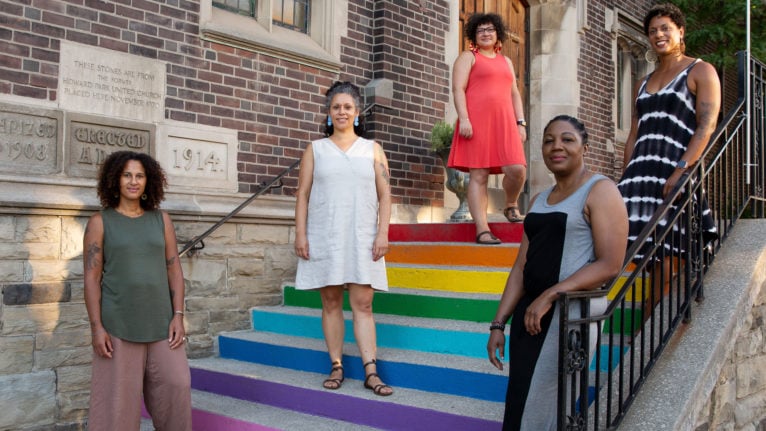 In early July, in Toronto’s west-end neighbourhood of Roncesvalles, Home Hardware store owner, Len McAuley, posted a new statement on the store’s exterior marquee. The sign read “All Lives Matter, Be Safe, Be Kind.” A local resident took a photo of the sign which quickly circulated online.

The meaning of “all lives matter” is now well known: it critiques the Black Lives Matter (BLM) movement that has taken root locally and internationally to protest the killing of unarmed Black civilians. It misinterprets “Black Lives Matter” as meaning only Black lives matter. But the BLM slogan is a call for justice and a recognition that not all lives are equally at risk when it comes to police brutality. When the Home Hardware sign went up, public outcry from residents of Roncesvalles and neighbouring Parkdale was immediate. McAuley took down the sign and apologized. He later stepped down from his position as chair of the Roncesvalles Village Business Improvement Area (BIA).

Kaswentha—Two Row Wampum or Tawagonshi Treaty—territory, known as Roncesvalles, has been home to working class Polish families who came to Toronto after WWII. But in the past 20 years, it has transformed into an upper middle-class neighbourhood. While the neighbourhood is less ethnically Polish than it once was, it remains less racially diverse than any other neighbourhood in the city. According to the 2016 census survey, only 26 per cent of residents identified as racialized compared to the 50 per cent of people who identify as a visible minority across the City of Toronto.

MORE: Dear sister: ‘I wonder if my silence played a hand in your suffering’

We are five Black women who have lived across the country, from Victoria to Edmonton to Winnipeg to Toronto. The Home Hardware incident is one example that highlights a greater problem across the country. It provides a chance to address the exclusion and erasure that Black Canadians face from neighbours, in shops and on the playgrounds where we raise our children. It also works to connect the dots between anti-Black racism and the colonial violence that pervades our everyday experience. Here, we discuss how one seemingly small phrase reflects the complex ways that language, ideas and actions continue to oppress Black, Indigenous and people of colour (BIPOC) in Canada.

Liz Ikiriko: I am a bi-racial Nigerian-Canadian who has lived in Regina, Calgary and Toronto. I have endured countless forms of malicious hate as well as ignorant questions that regularly remind me that I am not viewed as a local resident in any place that I live. When my white husband and I bought our home in Roncesvalles 13 years ago, I felt familiarly uneasy in this predominantly white area. How would I be perceived in this space? My discomfort was heightened once I had our fair-skinned son. I would take him for walks, and I would commonly be referred to as the nanny.

I was saddened to read an article on Medium written by Stephen Dorsey, a local Black Roncesvalles resident, regarding the “all lives matter” debacle. Dorsey suggests that it is our collective responsibility to patiently provide what he calls “on-ramps”, which he defines as spending time guiding the uninformed to be better allies in the fight against racism. Dorsey states that “outrage culture (spewing anger before fully understanding)…leads to more divisions, and the associated negativity impedes progress towards finding common ground and achieving the positive change we all want.”

Attention is often directed to the unfair treatment of a white community member when their racist actions are publicly criticized. Their upstanding neighbourliness is used to excuse acts that are ignorant and sometimes malicious. But insistent rebuke is necessary. It can propel an offender out of their privileged slumber and bring forth a public discourse to address frequently ignored micro- and macro-aggressions that harm so many BIPOC within the community.

Dorsey is wrong: our emotions do not impede progress. Ignorance, even in its most accidental form, is the real offender and deserves no sympathy. There is anger and deep hurt expressed in the silencing of our Blackness and our right to live in the communities where we reside.

Melanie Carrington: Where are you really from? is the question when a stranger (always white) can’t make sense of the fact that I was born and raised in Winnipeg. When I was a child, this question stung, a visceral reminder that my belonging is always in question.

More than 20 years ago, Hazelle Palmer wrote the book But Where Are You Really From? in response to this intrusive line of questioning. This micro-aggression, regardless of whether the inquirer is aware or not, is born of “colonialist and racist assumptions about what Canadians look like and what it is to be Canadian.” The “all lives matter” statement feels like a derivative of this, such is its signal and sting. I have come to understand that the sting represents the enactment of whiteness. In a world where whiteness dominates, my presence is often viewed with suspicion, and this is exactly what makes me vulnerable and unsafe.

In this “progressive” Roncesvalles neighbourhood, and in the north-end Winnipeg neighbourhood where I was raised, I’ve heard the familiar refrain, “I don’t see colour”. While race has no biological basis, it does have real-world consequences. “Colour blindness”, or a lack of race consciousness, offers me no benefit. Rather, it entrenches the status quo, gaslighting the person who experiences racism and allowing the perpetrator to ignore the way in which they enacted racial violence, thereby maintaining racial inequality.

Regardless of intent, public outcries of “all lives matter” devalues Black life and emboldens those with similar or more fervent views. This is no different than other racist acts I have experienced. What is different are the calls for redress coming from non-Black voices. This is crucial. Solidarity in the form of action means taking risks and recognizing that the outcome is worthwhile. I hope that all those who passionately call for an end to anti-Black racism are equally committed to the daily slog of decentering whiteness and the privilege it affords. The revolution is here, it is time for people to decide how they will take part. 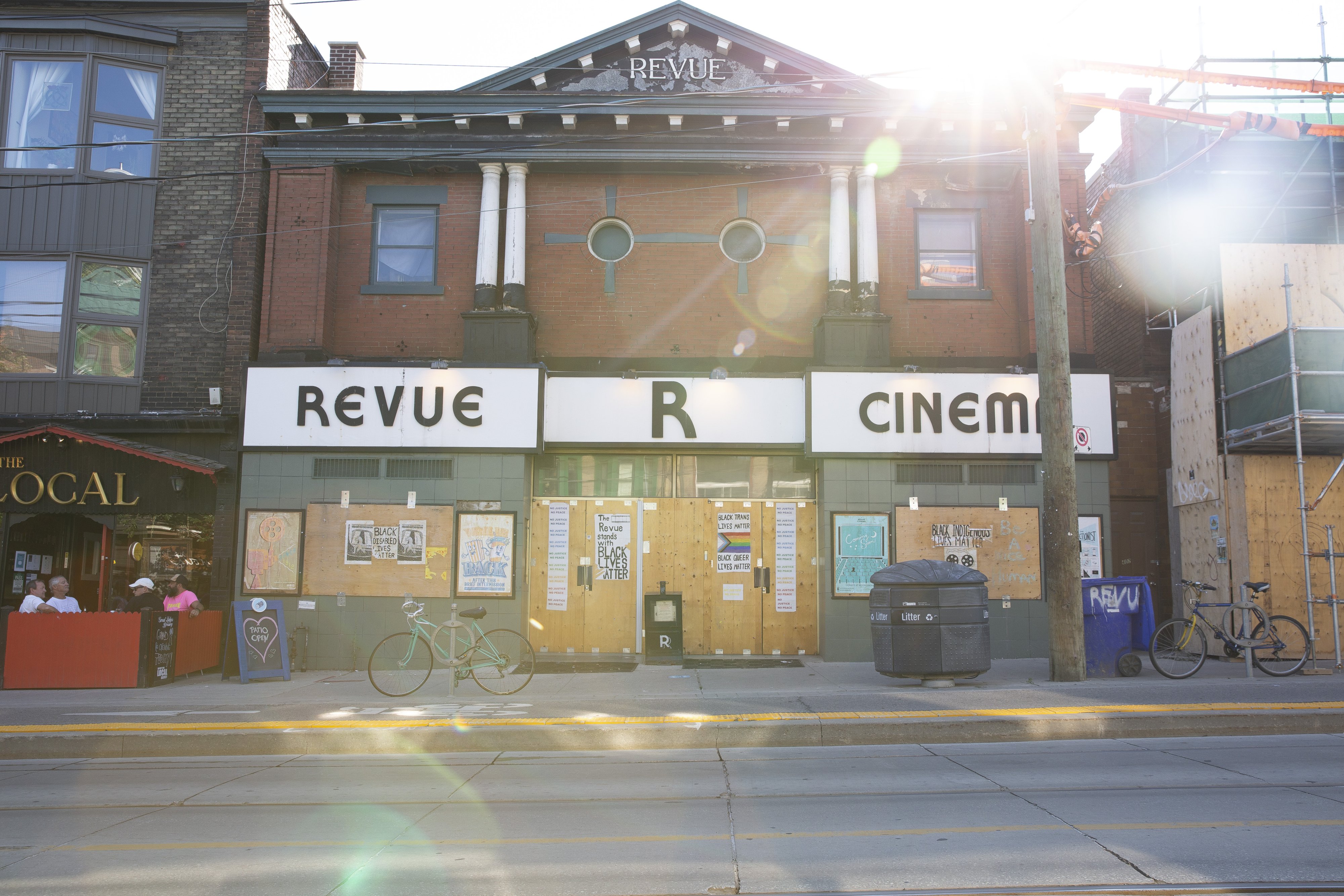 Kara Stewart-Agostino: I have lived in Winnipeg, Kanata and Toronto, and have watched the “good guys” get away with racism wherever I live. Growing up, I was called the N-word by an older boy at school. Another time, a boy threw dirt at me, unprovoked, and called me a b-tch. In both situations, their parents—a teacher and bank manager—could not believe their children would do such things. Therefore, they suffered no consequences.

So it comes as no surprise when neighbours defend and believe that an “all lives matter” sign is put up in benign ignorance because a white business owner has long-standing ties in the community. I’m aware I run the risk of being labelled an “angry Black woman” who is taking out years of frustration on a white man who “made a mistake”. Funny thing is, racism does make me angry. The real “mistake” is in failing to acknowledge that racism exists in every part of Canadian society—even in progressive neighbourhoods; the mistake is in asking BIPOC to continue to give white folks the benefit of doubt; the mistake is in failing to address the systems of power and privilege that perpetuate racism.

Who owns the buildings on Canada’s main streets? Who is being granted the bank loans to open businesses while commercial real estate and property taxes continue to rise? According to a 2017 Government of Canada survey, only 12.2 per cent of small- and medium-sized businesses in Canada are owned by visible minorities, and only 1.4 per cent by Aboriginal people. The imbalance of economic power in Canada has yet to be addressed. The BLM signs that we now see in storefront windows are welcome sights, but symbolic gestures have minimal impact on the experiences of BIPOC residents.

In Canada, if we want to understand racism, we need to stop giving the “good guys” the benefit of doubt. I don’t care whether “all lives matter” is said in ignorance—it’s just another example of racism in another Canadian neighbourhood. I’m ready to finally feel at home. 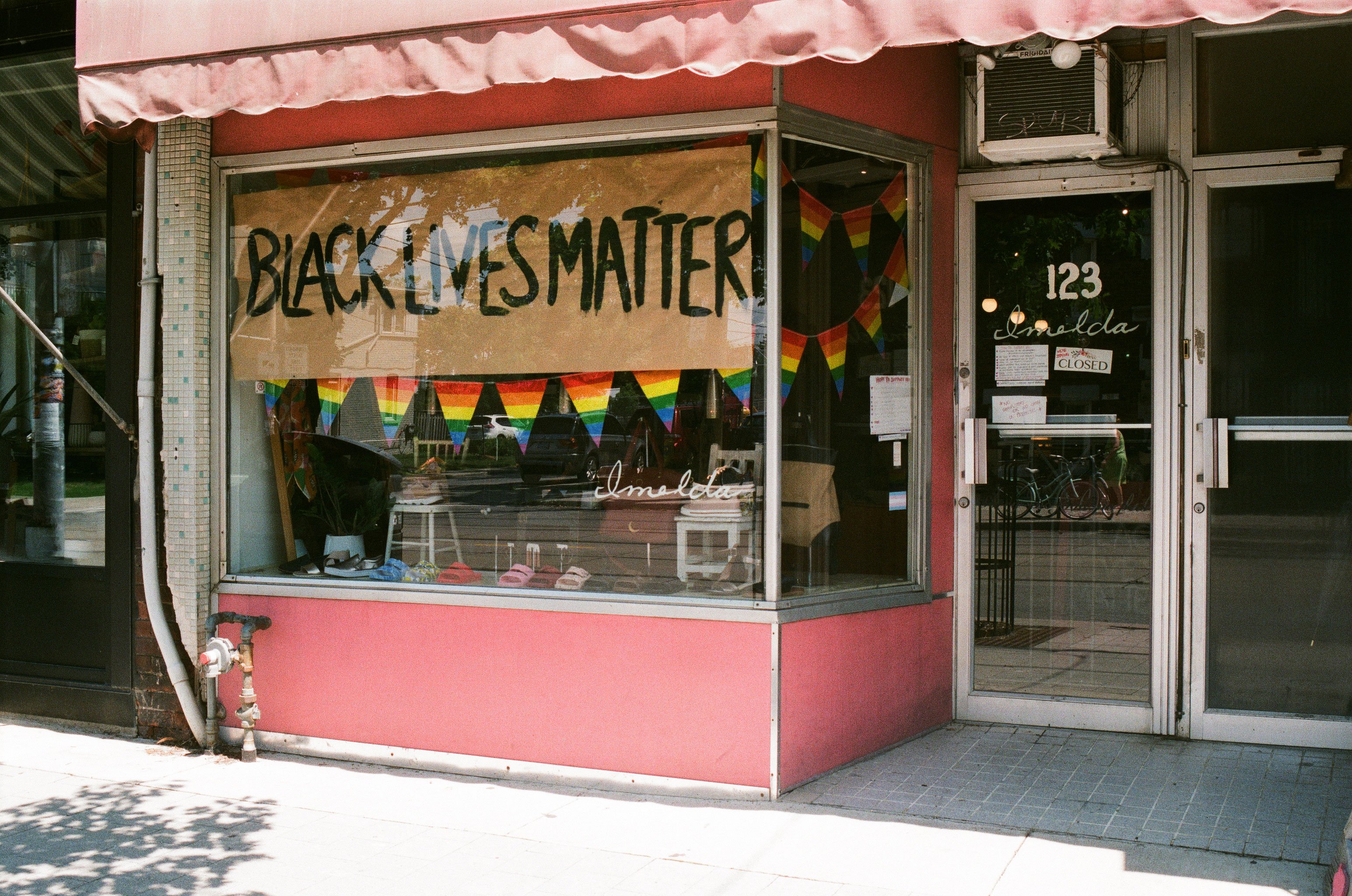 Máiri McKenna Edwards: Everyday I benefit from my proximity to whiteness. I am bi-racial and often perceived to be white. I grew up in the rural area of Caledon, Ont. There, I was teased about my Afro, broad nose and lips. However, friends would assure me that I wasn’t “like them”, the other Black people. This was meant as a compliment, but meant that I did not feel safe to be myself. My perpetual feeling of otherness fuels my desire to speak on the impact of racism in all of our lives.

I often benefit from the generosity of my community. Indigenous friends and families have patiently corrected my egregious ”mistakes” like mispronouncing names. I get a distinct sick feeling in my face and chest. I feel the urge to explain, clarify my intent, and find a resolution. Whiteness has the ability to prevent us from seeing when a line has been crossed. It allows us to be ignorant of the racist connotation of a phrase like “all lives matter” used during an age of civil rights action. This can fuel anger and hurt among BIPOC, which is a response often read by the offending party as too hostile. There is comfort in defining the limits of the offence and emphasizing individual remorse, ideally to absolve the sting of the act.

What I’ve also learned from being the target of racism is that absolution is not for the offender to define. The task is to face discomfort without expectation that you will receive guidance from those who have been harmed. We can be accountable to our communities for our actions. The necessary response is to listen and learn about the system from those it silences and to act in solidarity against it.