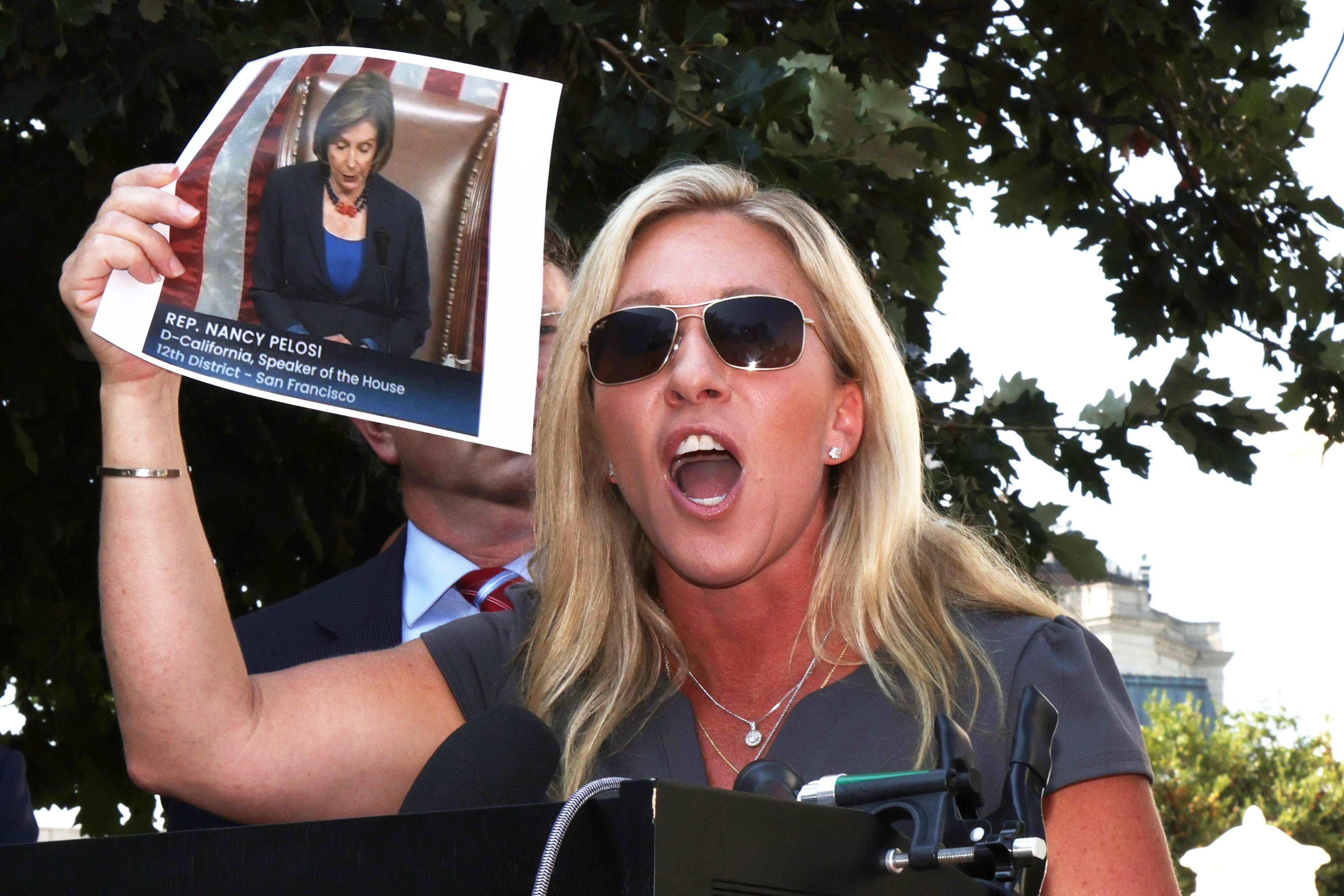 The act of wearing a mask has been a point of political contention for as long as the pandemic has ravaged the country, and the halls of Congress has seen its share of this stress, as lawmakers have played out the larger cultural conflict in the microcosm of their workplace. So one could be forgiven for breathing a sigh of relief when the mask mandates in the Capitol were lifted—hey, at least that’s one less thing for them to argue about.

As the rate of vaccination increased among members of Congress, Capitol Hill reporters, and congressional staffers, the mask requirements eased in both houses, albeit more slowly in the hot-tempered House of Representatives than in the Senate’s cooling saucer. Many people who work in the Capitol happily shed their coverings, even as they undertook the somewhat difficult task of relearning what their colleagues looked like with the bottom half of their face once again visible.

The relief was not universal. Custodial and cafeteria workers, floor staff and police officers have largely kept wearing their masks over the past few months. In recent weeks, however, it seems as if someone pressed the rewind button on the progress, as those who so recently left their masks at home have picked them back up again.

But it’s our elected representatives who have struggled the most with the return of mask mandates. A memo issued this week by Capitol Attending Physician Brian Monahan, in which he announced that masks would once again be required on the House side of the Capitol, instigated a maelstrom of fury from House Republicans. This anger was further provoked when Monahan sent a similar memo saying that masks were recommended, but not required, on the Senate side.

Some Republicans subsequently refused to wear masks on the House floor, flouting the medical guidance and incurring the ire of Democrats. When Democratic Rep. Jared Huffman challenged GOP Rep. Byron Donalds, who is not vaccinated, over his refusal to wear a mask, Donalds replied “mind your business.” (Donalds has refused a vaccine because he previously had COVID-19. Experts suggest that even if you have already recovered from the virus, it is still a good idea to get vaccinated to guard against variants and protect others.)

Outrage over the reimplemented mask mandate continued to flare into Thursday, with Republicans challenging the CDC guidance that had influenced Monahan’s decision, and accusing Speaker Nancy Pelosi of abusing her power. A Republican congresswoman circulated a flier from Capitol Police saying that anyone who refuses to wear a mask could be “subject to an arrest.”

The Capitol Police said in a statement posted to Twitter later on Thursday that “there is no reason it should ever come to someone being arrested.”

“The CDC has become a political arm of the administration. It wants to control every element of our life,” House Minority Leader Kevin McCarthy said in a press conference on the Capitol steps on Thursday morning, flanked by dozens of House Republicans braving the 80 percent humidity to express their discontent. McCarthy voiced his outrage at the apparent double standard by the Capitol physician, saying, “somewhere in the middle of that dome, the science changes.”

But the unequal guidance may stem from the fact that the vaccination rate is lower in the House than it is in the Senate. McCarthy himself noted on Wednesday that 85 percent of the House is vaccinated. According to a May CNN report, all House Democrats are vaccinated, meaning that the only holdouts would be Republicans.

Members of the ultra-conservative Freedom Caucus gathered outside the Capitol in the blazing heat later on Thursday morning, insisting that McCarthy should call a vote to vacate Pelosi from her position as speaker. As Democrats control the House, however narrowly, this effort would be doomed to fail.

That afternoon a large group of Republican House members marched to the other side of the Capitol, requesting access to the Senate chamber, where the mask mandate is not in effect. GOP Rep. Thomas Massie told reporters that Republicans were seeking “a taste of freedom.”

Dozens of Republicans filed into the Senate chamber, watching quietly for a few moments as Democratic Senator Raphael Warnock delivered a speech to an otherwise empty chamber advocating for the expansion of Medicaid in Georgia. Their point made, they soon left and returned to their side of the Capitol.

Despite all of these overt displays of mask acrimony, there were actual bipartisan congressional accomplishments to be had on Thursday. With uncharacteristic haste, the Senate and the House passed a $2.1 billion security supplemental that provides funding for the security for the Capitol complex (including the supposedly heavy hands of the Capitol Police), and authorizes thousands more visas for Afghan refugees. The bill passed in the Senate by a vote of 98 to 0, and then in the House by a vote of 416 to 11, with a handful of progressives joining a few conservatives in opposition.

But the conflict over wearing masks in the House is likely to continue at least through Friday, after which House will go into recess for the month of August. It seems likely that if the mask mandate remains in place when lawmakers return in September, the anger will resurface.

Then again, it’s the House of Representatives we’re talking about. Deeply divided and still emotionally raw from both the insurrection and Democrats’ insistence that the insurrection should be investigated more fully, antagonism will continue to dominate the scene for the foreseeable future—it just remains to be seen if masks will be a part of it.