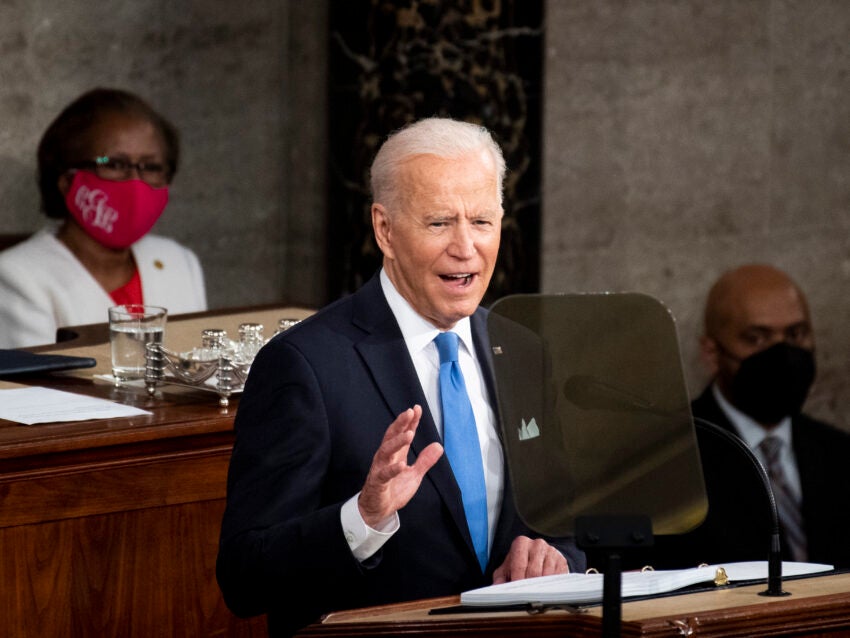 Marking his first 100 days in office, Biden extolled progress in the fight against COVID-19, pitched a $1.8 trillion investment in children and families, and advocated for new policy and spending on infrastructure and economic equality.

See how the senators and some representatives from Massachusetts responded below:

Millions of mamas & daddies just let out a big sigh of relief that the @POTUS is fighting to fix our broken child care system. It’s going to take a much bigger investment to guarantee #UniversalChildCare and early learning. I’m ready to lead that fight all the way. #JointAddress

We can invest in a future for all American families—including universal child care and universal pre-k—with a small wealth tax on fortunes above $50 million, a Real Corporate Profits Tax, and a boost to IRS enforcement. I’m in that fight all the way. #JointAddress

The President’s plans to make the rich pay their fair share and catch wealthy tax cheats are a strong down payment to #BuildBackBetter. I’m fighting for a #WealthTax, Real Corporate Profits Tax, and stronger IRS enforcement to pay for all the President’s plans with $2T left over.

In 100 days, the Biden-Harris admin has led our recovery with competence, compassion, and a real commitment to structural change. We’ve got a lot of big fights ahead, but I’m more optimistic than ever about the future we can build together. Let’s get back to work. #JointAddress

Like President Biden, I also think about jobs when I think about climate change. #JointAddress

I lost my mother to Alzheimer’s. My fight to help find a cure by 2025 is personal. President Biden’s commitment to research is deeply appreciated and I look forward to working alongside the Administration on this life-saving mission. #JointAddress https://t.co/fAZvFf9ubx

America faces four interlocking crises. Economic inequality, racial injustice, the COVID-19 pandemic, and the climate crisis. We must confront them with the kind of ambition, ingenuity, and vision that President Biden outlined tonight. #JointAddress

“We won’t ignore what our own intelligence agencies have determined – the most lethal terrorist threat to the homeland today is from white supremacist terrorism.” #JointAddress

Listening to the #JointAddress  I hear the influence of organizers across the generations. You have brought us to this moment.

This is a once in a generation moment for government to deliver.

If we believe health care is a human right, we must make it free.

We need Medicare for All.

.@POTUS “America is on the move again.”

Thanks to President Biden’s leadership in his first 100 days in office, we’ve gotten shots into arms, we’ve returned our kids to school, and Americans are getting back to work.

Nearly 60% of children in the Fourth District will benefit from the Child Tax Credit, and it will lift 3,800 children out of poverty. We must #MakeCTCPermanent.

Out of crisis comes opportunity. We have a responsibility to build an economy that works for everyone

Massachusetts will lead the way, from education to the life sciences to offshore wind, as we work to create a healthier, greener future for our kids. #JointAddress pic.twitter.com/U24oGQUEqZ

Health care should be a right, not a privilege in America. #JointAddress

Hope, compassion, truth, and science have returned to the White House. #JointAddress

You know. I know. @POTUS knows it.

Already this administration’s leadership has helped deliver vaccines to more than 200 million people, support to small businesses, and relief to Americans who are struggling. And that’s just the start. #JointAddress

Our children are the future—and the American Families Plan makes sure we are investing in that future with paid family leave, nutrition assistance, childcare funding, and investment in education. #JointAddress

Going back to normal isn’t good enough. Normal was 40 million Americans experiencing hunger every day. We can & must end hunger in Amerca. #JointSession

Count me in, Mr. President. #JointSession

… but for making a clear case that our nation must tackle these issues and more to build back better if we want to truly emerge and recover from the COVID-19 pandemic. #JointSession

And I am confident that it will restore their faith in our democracy and the fundamental idea that the United States is truly the land of opportunity. #JointSession