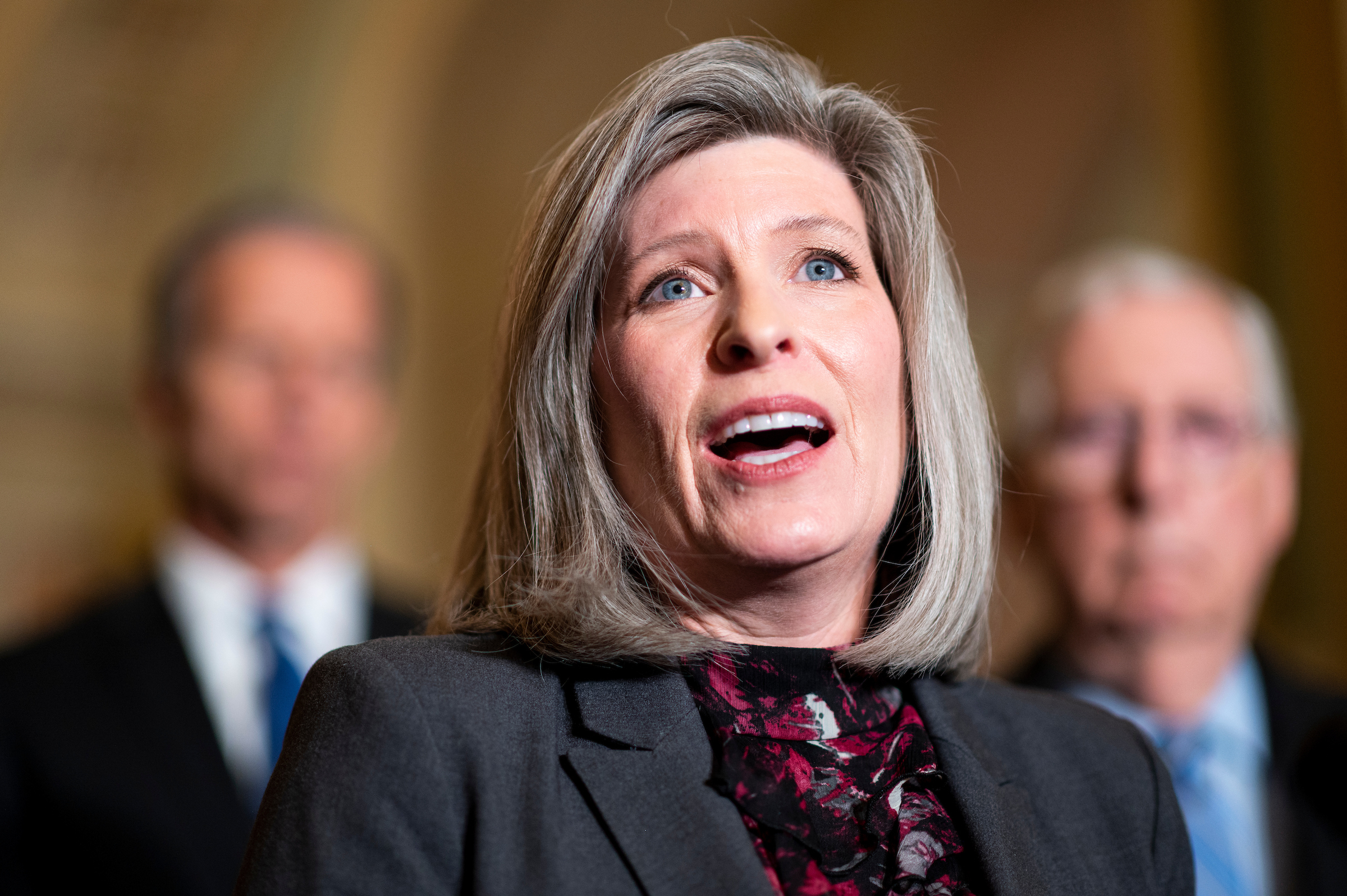 Facing a choice between voting for a process that will help Democrats raise the debt limit or voting against a delay of across-the-board Medicare cuts, most Republicans chose the latter.

It’s an age-old Washington trick for must-pass legislation that requires bipartisan support: Pair the thing the minority hates with something they support and hope they feel the good outweighs the bad.

In this week’s case, the pairing was a one-time change in the Senate rules that would allow Democrats to increase the debt ceiling without needing GOP votes to overcome a filibuster and provisions to stave off scheduled cuts to Medicare providers, lab services and physician reimbursements.

“It’s a bad position to be in. I don’t like being put in this position,” said Sen. Joni Ernst, R-Iowa. “But, you know, Medicare is important.”

Ernst, a member of GOP leadership, was one of only 14 Senate Republicans to vote for cloture, a procedural step that ends debate and overrides any filibuster, but she voted against final passage.

Cornyn said he supported the bill because he wanted to prevent Medicare cuts.

“I’m not going to stand by and watch these cuts to my hospitals and doctors go through,” he said.

The Republicans who voted against the bill did not want to be seen as facilitating a debt limit increase, especially after they vowed not to help Democrats raise the borrowing limit since the majority could do it on their own through the budget reconciliation process.

“We said we’re going to let them do it on reconciliation, we’re not going to help them,” Sen. Richard C. Shelby, R-Ala., said, calling it a “mistake” for some of his GOP colleagues to change their position. “I try to keep my word.”

Shelby was one of 11 Republicans who voted for cloture on a short-term debt limit patch in October. McConnell said at the time that the short-term increase, which all Republicans voted against on final passage, would give Democrats the time they needed to use reconciliation to pass a longer-term measure.

While many Republicans, like Shelby, feel the party caved in giving Democrats a process that allowed them to avoid using reconciliation, McConnell argued that the temporary rule exemption achieved his goal of making Democrats carry the burden of raising the debt limit by a specific dollar amount.

“Every single Senate Democrat will have to put their name to the gigantic dollar amount of debt they’re prepared to pile on the American people,” he said in floor remarks Wednesday.

Ultimately, Shelby and Sen. Mike Rounds, R-S.D., were the only two Republicans who voted for cloture on the short-term debt limit bill to oppose the temporary rule change to ease passage of a longer-term increase. Rounds voted against cloture but did not vote on final passage.

Most of the nine who helped Democrats a second time face little political risk. Barrasso, Capito, Collins and Cornyn are not up for reelection in 2022. Blunt and Portman are retiring. Thune has yet to decide whether he’s running. And McConnell has no formidable primary challenger.

Murkowski is already in political hot water with the Republican base after voting to convict former President Donald Trump for inciting the Jan. 6 insurrection. Trump has endorsed another Republican in the race, but Alaska’s move to ranked-choice voting is expected to help boost Murkowski. She said electoral politics did not factor into her decision.

“It is the right thing to do,” she said. “We have to avoid a default. We have to stand by the full faith and credit of the United States of America.”

Preventing Medicare cuts was also a motivating factor. “It’s a big deal for us in Alaska because we don’t have enough providers that accept Medicare. This would have been devastating,” Murkowski said.

The bill includes a three-month suspension of the 2 percent Medicare “sequester” that was set to begin on Jan. 1. It would return at 1 percent for the three months following.

The measure also includes a one-year extension of higher physician reimbursements under the Medicare Part B outpatient program, although the increase would drop to 3 percent from the original 3.75 percent increase enacted for 2021. Scheduled cuts to lab services would also be delayed for a year.

The bill also delays a separate 4 percent cut to Medicare provider payments that would’ve kicked in mid-January under statutory pay-as-you-go rules, along with cuts to farm subsidies and other smaller programs.

Most Republicans who voted for the bill cited the looming Medicare cuts as the main, if not the only, reason.

“I’ve heard from hospitals, the clinics, the doctors all around Wyoming,” Barrasso said. “We have 100,000 people in Wyoming on Medicare. I needed to make sure their facilities stay open.”

Collins said she had been leading a bipartisan effort with Sen. Jeanne Shaheen, D-N.H., to prevent the automatic cuts to Medicare from hitting in the midst of an ongoing and unpredictable pandemic.

“I also recognize that we need to deal with the debt limit. But Medicare was number one,” she said.

Democrats are already threatening political attacks on Republicans who voted against the bill.

Rubio voted against the bill to prevent the Medicare cuts over the debt ceiling procedure, and he’s not worried that his constituents will interpret it otherwise.

“I don’t know anyone here who supports those reimbursement cuts. So that was never in danger,” he said. “They just decided to link the two things. People aren’t dumb; certainly, the people in Florida are not stupid. And they recognize that these two things are tied together for political purposes, but one has nothing to do with the other.”

“They can [see] this is just a cynical game where a certain group of insiders had decided to give us a choice between choosing a heart attack or cancer,” he said.

Kennedy offered a unanimous consent request Wednesday to pass a stand-alone bill to prevent the Medicare cuts, but Democrats objected.

House Republicans also said they would have liked to vote for a stand-alone fix to the Medicare cuts. But voting against the combined bill was not a tough decision, several said.

“That issue will be resolved,” said Rep. Mario Diaz-Balart, R-Fla. “But the issue of voting for the increase in the debt ceiling when Democrats have basically been on this crazy, irresponsible spending spree — and that has caused inflation and everything else — it’s just not an alternative.”

Rep. Tom Cole, R-Okla., suggested it was an easy call for all but one House Republican — the retiring Adam Kinzinger of Illinois, who voted for it — to oppose the bill because Democrats had locked down the votes on their side.

“A ‘no’ vote on a bill that passes has very little political risk to it,” he said.

Cole acknowledged that Senate Republicans were in a tougher spot since some of their votes were needed.

“Their big problem over there is they’re doing something they said they wouldn’t do for the second time. And I think that creates a lot of problems amongst the Republican base,” he said. “I think that’s much more dangerous than doctors and hospitals for most of them.”

That’s what most Senate Republicans determined.

North Dakota’s Kevin Cramer said he struggled with his decision to vote against the bill because the Medicare cuts are particularly harmful for rural health care providers. He acknowledged that the Medicare cuts would impact voters more than the debt limit.

“But just given where we are, given the fact that we have some time, I think we should just keep fighting for something more responsible, particularly dealing with the debt itself, some sort of structural reforms,” he said.

Cramer said he’s certain Democrats will attack him and other Republicans for voting to cut Medicare, even though the decisions senators faced aren’t that simple.

“They often require nuance that you may never be able to put on a bumper sticker or explain in a 30 second-ad, but nobody told me every vote was going to be easy,” he said. “I signed up for the crazy job anyway.”