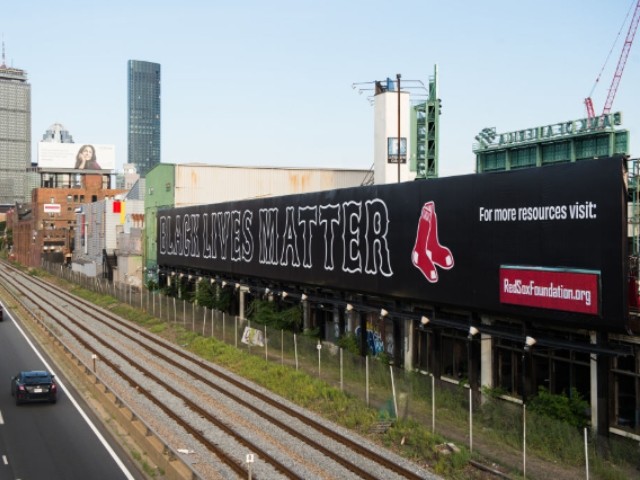 The Boston Red Sox have placed a huge, team-branded Black Lives Matter billboard along the Massachusetts Turnpike next to Fenway Park.

The team unveiled its social justice statement on Wednesday, joining the rest of Major League Baseball in paying homage to Black Lives Matter.

The #RedSox have put up a #BlackLivesMatter billboard next to Fenway Park along the Mass Pike https://t.co/6z9qH0LRsz pic.twitter.com/LI8dGvZujO

This is not the first time that the Sox bowed to the Black Lives Matter agenda. On June 2, the team put out a statement — as did many other MLB teams — decrying the “senseless killings” of blacks adding a list of black men who died in police-involved actions.

Our anger and grief must translate to action. We have a responsibility to use our platform to amplify messages of truth and justice.#BlackLivesMatter https://t.co/uTmz3nDO4h pic.twitter.com/aXeiEFon31

The Sox have joined other teams now injecting the Black Lives Matter agenda into baseball. On Tuesday evening, the Cincinnati Reds not only filled their social media accounts with BLM messages, but many of the team’s players took a knee in protest against the country during that evening’s game.

Also, with its official social media accounts, the league condoned teams taking a knee during the anthem and even insisted in one tweet that kneeling during the anthem was “never about the flag.” A claim that is in direct contravention to what anthem protest inventor Colin Kaepernick said when he first began protesting in 2016.