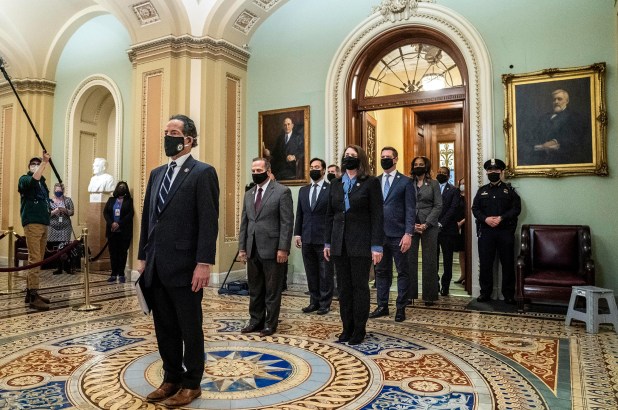 The impeachment managers led by Rep. Jamie Raskin leave the US Senate after delivering the impeachment article.
Melina Mara/CNP/startraksphoto.com

Senators will be sworn in Tuesday afternoon to serve as jurors in the impeachment trial of former President Donald Trump for accusations that he incited the riot at the Capitol earlier this month by rousing his supporters to overturn the November presidential election.

Democratic members of the House impeachment team walked the single article of impeachment for “incitement of an insurrection” through the halls of the Capitol on Monday evening to the Senate, officially allowing Trump’s second impeachment trial to begin.

But the difference this time is that the Democrats control the chamber and Sen. Pat Leahy (D-Vt.) in his role as president pro tempore will preside over the trial instead of Chief Justice John Roberts, because Trump no longer holds office.

While the article was delivered to the upper chamber Monday, the trial isn’t expected to begin until the week of Feb. 8 to allow Trump’s legal team to assemble its defense.

President Biden also backed a delay so that the Senate could have time to confirm nominees to his administration and begin working on his legislative agenda, including a $1.9 trillion coronavirus relief bill.

Senate Republicans have challenged the constitutionality of a trial because Trump is no longer in the White House and the reason for such an action is to remove him from office.

But Senate Majority Leader Chuck Schumer (D-NY) rejected that argument in a speech Monday on the Senate floor, raising the 1876 impeachment and Senate trial of former Secretary of War William Belknap, who had already resigned for taking bribes.

White House press secretary Jen Psaki has tried to distance the administration from taking sides in the trial, saying it is a congressional matter, but the president Monday said he believes it “has to happen.”

The House voted 232-197 to impeach Trump on Jan. 13, with 10 Republicans crossing the aisle to vote along with Democrats.

But in the Senate, Democrats, who now control the chamber via a 50-50 split and Vice President Kamala Harris as the tie-breaking vote, will need 17 Republicans to vote with them — an unlikely outcome.

The Senate requires a two-thirds majority to convict.

Trump’s second impeachment trial comes a little more than a year after senators were sworn in for his first trial on Jan. 16, 2020, on two articles of impeachment — for obstructing justice and abuse of power.

He was acquitted on both charges in a Senate vote in February.

Sen. Mitt Romney was the only Republican to vote to convict Trump on the abuse of power charge for his July 2019 call to Ukrainian President Volodymyr Zelensky.

This will be the fourth impeachment trial in the history of the Senate.

President Richard Nixon resigned in 1974 ​over the Watergate scandal​ before he could be impeached.