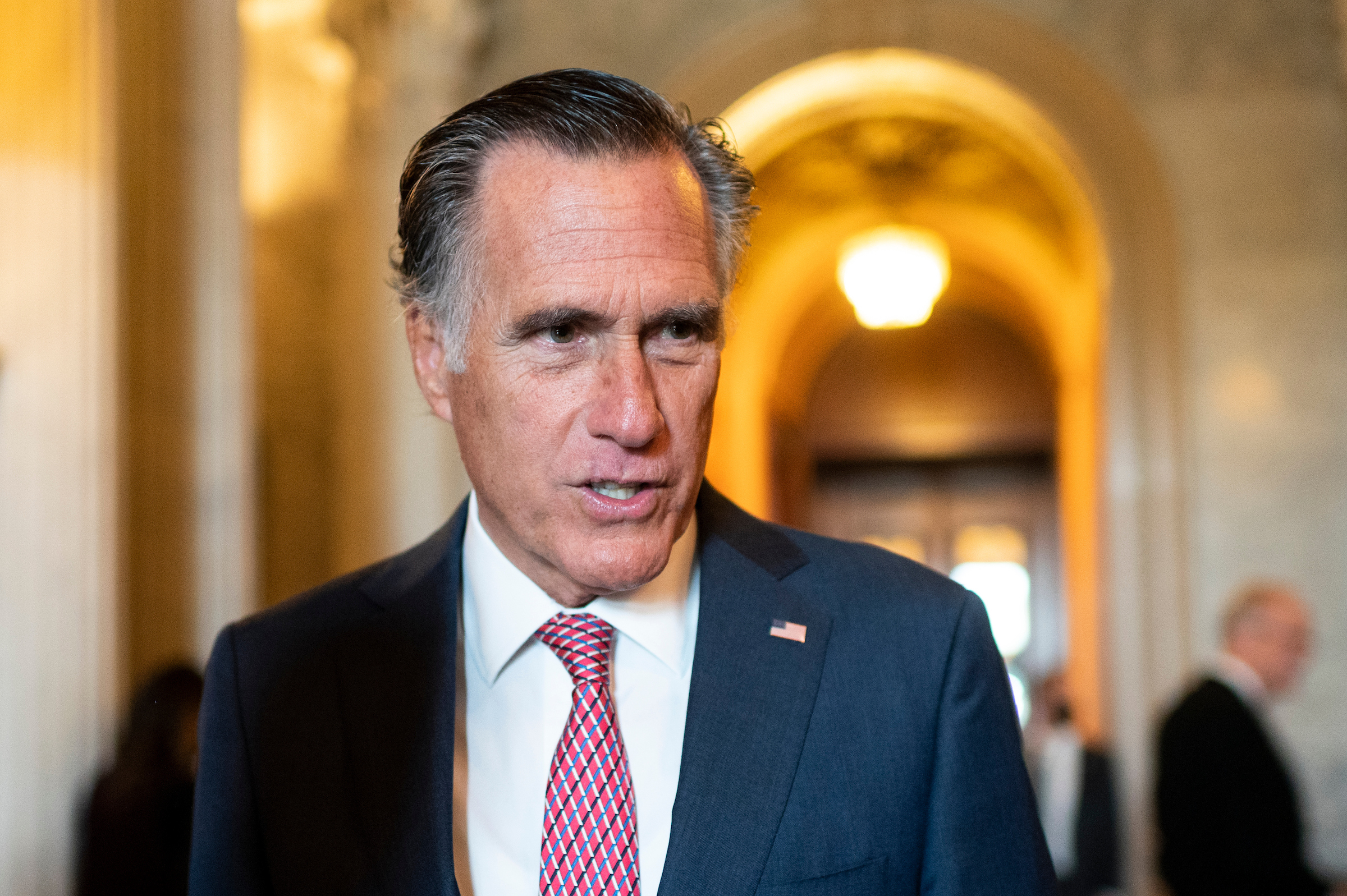 If Republicans take one or both chambers of Congress in November, don’t be surprised if shoring up Social Security’s finances becomes an area of bipartisan focus.

Pronouncements like that have been made before only to die on the next election campaign’s vine. But the spirit of compromise that animated discussions around last year’s bipartisan infrastructure package appears to be creeping into nascent talks about finally, really, this-time-we’re-not-joking doing something to stave off Social Security insolvency.

The prospects look brighter now in the Senate, where veterans of previous bipartisan “gangs” have begun talking about the need for fixes.

That includes Republicans Mitt Romney of Utah and Bill Cassidy of Louisiana, as well as Richard J. Durbin of Illinois, the chamber’s No. 2 Democrat; Joe Manchin III, D-W.Va., that ever-critical swing vote; and Maine’s Angus King, an independent who caucuses with the Democrats.

King and Romney are lead sponsors of legislation that would create “rescue committees” tasked with coming up with proposals to fix Social Security and other trust funds in financial trouble.

King said in taped remarks for a Thursday discussion hosted by the Committee for a Responsible Federal Budget, an advocacy group, that the idea would be reminiscent of the Social Security commission led by former Federal Reserve Chairman Alan Greenspan that led to 1983 legislative fixes. That measure helped extend the program’s solvency to the 2030s, King said, which “as we know, that’s not far away now.”

True to form, the latest Social Security trustees report predicts there’ll only be enough money to pay 76 percent of scheduled benefits starting in 2033. “The figures don’t lie,” King said. “It’s a problem we have to address, the sooner the better.”

Romney said at the same event that Cassidy’s been quietly sounding out senators from both parties on some Social Security ideas, which he’s not ready to discuss publicly. Like King and Romney, Cassidy is a veteran of the infrastructure bill talks, and he’s a member of Senate Finance, which has jurisdiction over Social Security.

Cassidy’s also a cosponsor of the Romney-King trust fund overhaul bill, as are GOP Finance members Todd Young of Indiana and John Cornyn of Texas. Virginia’s Mark Warner, a Finance Democrat, is on that bill too, along with Manchin and Arizona’s Kyrsten Sinema — more members of the infrastructure negotiation gang.

Durbin’s not on that bill, but Romney said he recently told him “I’m willing to work with you to save Social Security.” Durbin’s office couldn’t confirm that conversation, but that’s not unusual given how often senators informally interact with each other.

Durbin has been involved in bipartisan talks before about potential “grand bargains” to reduce deficits and debt. He was one of 11 members of the Simpson-Bowles fiscal commission in 2010 — ultimately not a big enough bipartisan majority to succeed — that backed a broad set of recommendations, including Social Security fixes that would have raised taxes and trimmed benefits while gradually increasing the retirement age.

One of those recommendations was to gradually increase the share of wages that are covered by Social Security payroll taxes, the program’s chief funding source, which is indexed for inflation each year and currently sits at $147,000 for 2022. Wages up to that limit are taxed at 6.2 percent, paid both by the employee and employer.

The tax already isn’t keeping up with benefit payments and is falling farther behind as the retiree population increases. So despite a $2.8 trillion trust fund reserve, starting in about 11 years beneficiaries will need to take a substantial haircut without fixes.

‘Take the cap off’

Simpson-Bowles would have gradually boosted the wage threshold under which the Social Security tax is applied until it hit 90 percent of all “covered earnings” or U.S. wages and salaries.

That figure was specified in a 1977 set of legislative fixes, which it ultimately hit in 1982 before beginning a long, slow decline to around 83 percent today as income inequality widened and earnings at the top of the income scale continually outpaced inflationary increases in the Social Security tax cap.

Social Security benefits are tied to how much is earned and paid into the trust fund during working years, a link that’s been critical to maintaining bipartisan support for the program. Simpson-Bowles and similar measures have sought to reduce benefits for higher earners, which is controversial. But the alternative is much higher benefits for wealthier retirees, which isn’t politically palatable either.

Even with their plan’s tough medicine, raising the taxable portion of earnings would only close about 19 percent of the program’s long-term shortfall, according to Social Security’s actuaries. Much more was needed on the spending side, which led critics on the left to carp that Simpson-Bowles wouldn’t have left seniors with enough to eat — some dubbed it the “cat food commission.”

Some Democrats, including Manchin, say more can be done to raise Social Security taxes. He and others have proposed eliminating the current payroll tax cap so it hits higher up the income scale, like policymakers did with Medicare in the 1993 budget reconciliation law.

Raising the taxable maximum until it covers 90 percent of today’s covered earnings would bring the cap up from $147,000 to $337,500, according to Stephen C. Goss, Social Security’s chief actuary. Manchin said he would take that figure up “overnight” to $400,000.

“You can’t just say, well, if you make less than $400,000 we’re not going to raise anything,” Manchin said. “The bottom line is, you know, we should be taking the cap off, increase that so we have the financial stability.”

Top Democrats want to take the opposite approach — leave the current threshold alone but start applying the payroll tax again once earnings hit $400,000. That would be combined with a host of changes beefing up benefits, especially for the lowest-income and most elderly beneficiaries. A bill from Ways and Means Social Security Subcommittee Chair John B. Larson, D-Conn., mirrors much of Biden’s own plan and has 200 cosponsors.

But none are Republicans, and Social Security actuaries estimate Larson’s bill will only prolong trust fund solvency for five years. In addition, the rules of budget reconciliation preclude changes to Social Security taxes or benefits, so backers of Larson’s bill or similar would need 60 Senate votes.

Social Security and Medicare are the two biggest long-term drains on U.S. government finances. Medicare is probably more costly in the long run and has an even earlier trust fund exhaustion date, in 2026. But it’s harder to fix, involving all sorts of calculations to try to “bend the curve” of medical inflation.

At a House Budget virtual hearing last week, former Rep. Mick Mulvaney, R-S.C., who was former President Donald Trump’s budget director and acting chief of staff, told the panel that Social Security was easier and that lawmakers should consider using next year’s debt ceiling deadline as a forcing mechanism to do something.

“Social Security is the type of thing that needs to be fixed and can be fixed,” Mulvaney said, calling it “mathematically easy.”

He sounded a bit like Durbin, who said this back in 2013: “I’ve said before Social Security is simple math; Medicare is advanced calculus. We can figure a way through Social Security.”

Others have made similar comments throughout the years, including when President George W. Bush and a GOP Congress made overhauling Social Security a top priority in 2005 — only to have that effort fall flat and be used against them in the 2006 midterms.

Divided government is probably a better opportunity, so both parties can share in the blame — or the credit. But with the left and right ready to pounce, it’s never a safe bet to say Social Security overhaul is a slam dunk.

Take Rep. Glenn Grothman, R-Wis., who at the House Budget hearing called tight discretionary spending caps imposed in 2011 “maybe the best piece of public policy we’ve seen in the last 20 years.” But while there are few federal programs Grothman wouldn’t like to cut, Social Security isn’t one of them.

“I personally don’t think we should ever cut Social Security,” Grothman said. “People have paid into that, and that’s the one thing we shouldn’t cut.”

Lindsey McPherson contributed to this report.