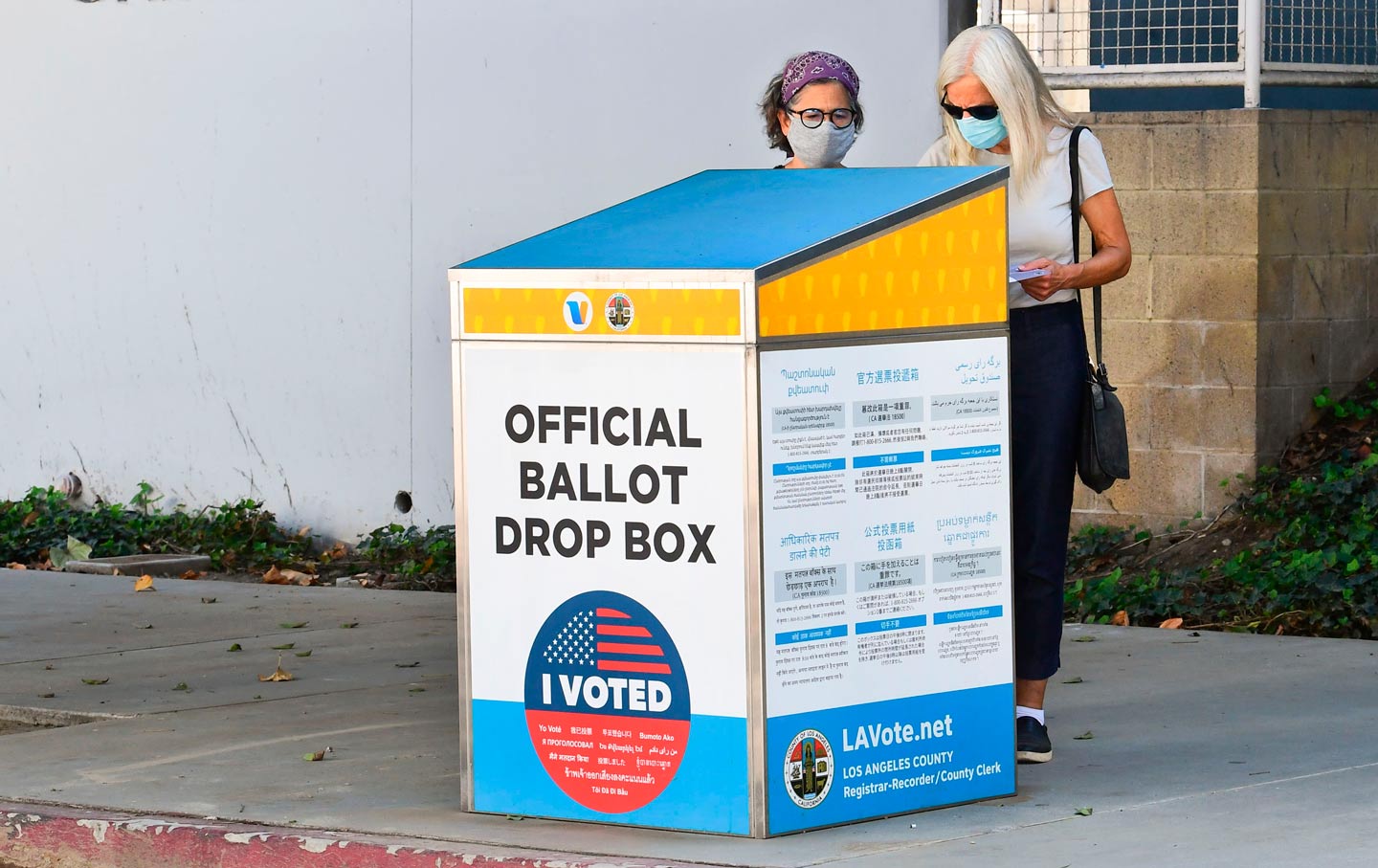 Trump Is Urging Republicans to Break the Law

Trump Is Urging Republicans to Break the Law

He not only applauded the California GOP’s illegal use of mail-in ballot drop-boxes; he’s urging Republican officials elsewhere to do the same thing.

Donald Trump has long had a “tell,” a behavioral tic that gives his game away: He has a history of accusing his opponents of doing or planning what he and his supporters are actually doing or planning.

To take a few obvious examples: He accused Hillary Clinton’s campaign of working with the Russians to undermine the election, when a wealth of evidence suggested it was the Trump campaign that was benefiting from the efforts of Putin’s people to throw mud into America’s electoral works (even if the Mueller inquiry concluded it was not via deliberate coordination). And, throughout his presidency, Trump has accused the media of gratuitously spreading “fake news,” when in fact Trump himself has practiced the dark arts of propaganda and misinformation in a way no other president has come close to.

So the longer and louder Trump goes on about his opponents’ committing electoral fraud, the safer a bet it is that Trump’s people, as he lags in the polls, are gaming out ways they can themselves undermine the integrity of the voting process.

If you’re looking for a Signal 18 days before the election, you could do a lot worse than paying attention to a shocking story out of California. Apparently, in several Southern California and Central Valley communities, the state GOP has deliberately violated state law by putting in place more than four dozen of its own unsecured voter drop-boxes, in locales likely to attract conservative voters—including in several gun stores in and around Fresno.

This comes after months in which Trump has loudly denounced mail-in voting and voter drop-boxes. As I reported in Tuesday’s column, conservative politicians such as Texas Governor Greg Abbott have gone into overdrive looking for ways to shut down drop-box locales.

Earlier this week, California Attorney General Xavier Becerra and Secretary of State Alex Padilla sent cease-and-desist letters to the state Republicans, letting them know their drop-boxes were a violation of state law, which gives election officials—and only election officials—the power to set up such facilities.

Meanwhile, Trump seems to revel in the prospect of more election chaos, deliberately seeded and nurtured by state Republicans. On Tuesday and Wednesday, he sent out a series of tweets urging Republicans in California to stand firm in their illegal actions—in the wake of which the party suggested it would ignore California’s cease-and-desist letters and keep the boxes functioning—and suggesting that party operatives in New York, Illinois, and elsewhere should pull the same stunt.

To sum up the broader context for this particularly unsavory Signal: While GOP senators in Washington are twisting themselves into amoral knots to justify their rush-job confirmation of a stunningly conservative Supreme Court nominee—and doing everything in their power to ensure she is in place before an election that the so-called law-and-order president is trying to throw into legal chaos so that vote-count disputes end up before the Supreme Court—that same law-and-order president is busy encouraging dirty-tricks operatives to break state election laws in multiple states simultaneously.

Don’t assume this is all simply Trumpian Noise, of a similar measure to, say, his recent, rather tone-deaf retweet of a juvenile rhyming meme mocking Biden for being so old that he would be a nursing home “resident” rather than a “president.” No, when it comes to election shenanigans, this is serious stuff; for Trump is going full-authoritarian to destroy trust in an election that he looks increasingly likely to lose.

To my mind, that’s the unrivaled domestic Signal of the moment. But I’d be remiss if I didn’t at least give a nod to unfolding international stories, as well—for, in this Trump-obsessed, Covid-19 moment, it’s all too easy to turn inward, to forget that the rest of the world is still out there.

Take, for example, the escalating violence between Armenia and Azerbaijan, which has all the hallmarks of triggering a broader regional conflagration. The Trump administration has for now taken a head-in-the-sand approach to international crises, and the American public seems in no mood to focus on events beyond its own borders. But if you’re reading overseas news sites, you’ll know that both sides in this latest incarnation of a decades-long dispute appear to be firing missiles into the other’s territory, leaving piles of rubble and human devastation that could be mistaken for images from the Syrian civil war.

It’s also worth paying attention to the story of an alleged Turkish plot to assassinate a Kurdish-Austrian politician in Vienna—if confirmed, it would place extraordinary pressures on the European Union to impose tough sanctions against Recep Tayyip Erdogan’s government in Turkey, even though Turkey is a member of NATO.

Or consider the October UNICEF report indicating that as a result of the pandemic 150 million more children are living in what the report terms “multidimensional poverty,” lacking access to even basic education and/or health care. You’d have thought the “pro-life” president and his congressional allies would be all over that one; instead, nothing. Just the unpleasant spectacle of an American leadership too preoccupied with its own woes, too fixated on ginning up domestic electoral chaos, to expend political and emotional energy even pretending to care about the rest of the world.