Where Does Joe Biden Actually Stand On Defunding The Police?

Where Does Joe Biden Actually Stand On Defunding The Police?

Former Vice President Joe Biden’s stance on police funding has become ambiguous after he recently indicated that he was willing to redirect money after previously insisting that he was not in favor of the movement.

The presumptive Democratic presidential nominee said this month that he “absolutely” agreed that tax dollars could be redirected away from police and to other initiatives and social programs, which defines the intention behind the defund the police movement. But before his July 8 comments, Biden repeatedly said he opposed the concept of defunding law enforcement.

“I do not support defunding police,” the presumptive Democratic nominee wrote in a June USA Today op-ed. “The better answer is to give police departments the resources they need to implement meaningful reforms, and to condition other federal dollars on completing those reforms.”

In fact, in the op-ed, Biden proposed a $300 million federal increase to “reinvigorate community policing in our country.”

The funds would be directed to the Community Oriented Policing Services (COPS) Program, a pre-existing federal program that Biden says wasn’t properly funded, according to his campaign website. The COPS Program, which was created in 1994, was set to provide funding for crime prevention and sought to bolster the relationship between police officers and civilians, according to the Department of Justice.

“Every single police department should have the money it needs to institute real reforms like adopting a national use of force standard, buying body cameras and recruiting more diverse police officers,” Biden wrote.

The movement is also distinct from the less popular effort to abolish the police, which seeks to completely strip a department’s funding. 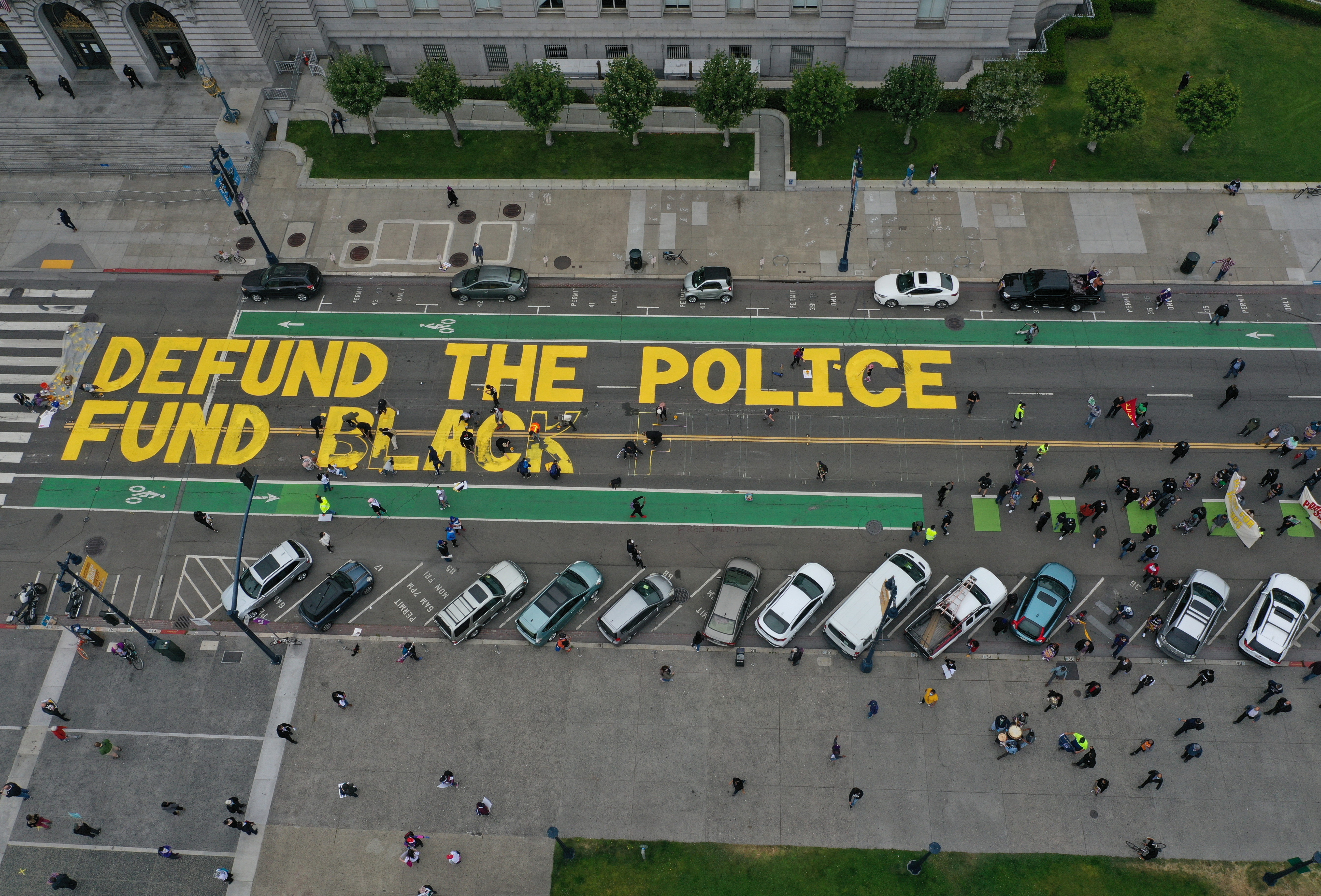 Protesters paint a mural that says ‘defund the police’ during a Strike For Black Lives demonstration outside of San Francisco City Hall on July 20, 2020 in San Francisco, California. (Justin Sullivan/Getty Images)

Biden also said he did not support defunding the police in a June interview with Trevor Noah on “The Daily Show” and noted that he doesn’t think “all cops are bad cops.”

“I don’t think police should be defunded, but I believe the conditions should be placed upon them where departments are having to take significant reforms,” he told Noah. “We should set up a national ‘use of force’ standard.”

Biden’s campaign has reiterated this sentiment.

But most recently, Biden said he “absolutely” agreed to redirect funding from police budgets in a July interview with NowThis.

“But do we agree that we can re-direct some of the [police] funding?” the NowThis reporter asked Biden.

Neither Biden nor his campaign have followed up to clarify the apparent contradiction from his previous statements.

He also criticized the militarization of the police, saying, “The last thing you need is an up-armored Humvee coming into a neighborhood, it’s like the military invading.” (RELATED: Cutting Police Funding Will Lead To Understaffing, Reduced Training, Union Official Says)

Biden intends to create an independent task force to direct law enforcement prosecutorial decisions and tackle “discrimination and other problems,” according to his campaign website. The former vice president also seeks to end cash bail, calling it “modern-day debtors’ prison” and establish a form of community policing.

Biden’s campaign did not respond to the Daily Caller News Foundation’s request for comment.