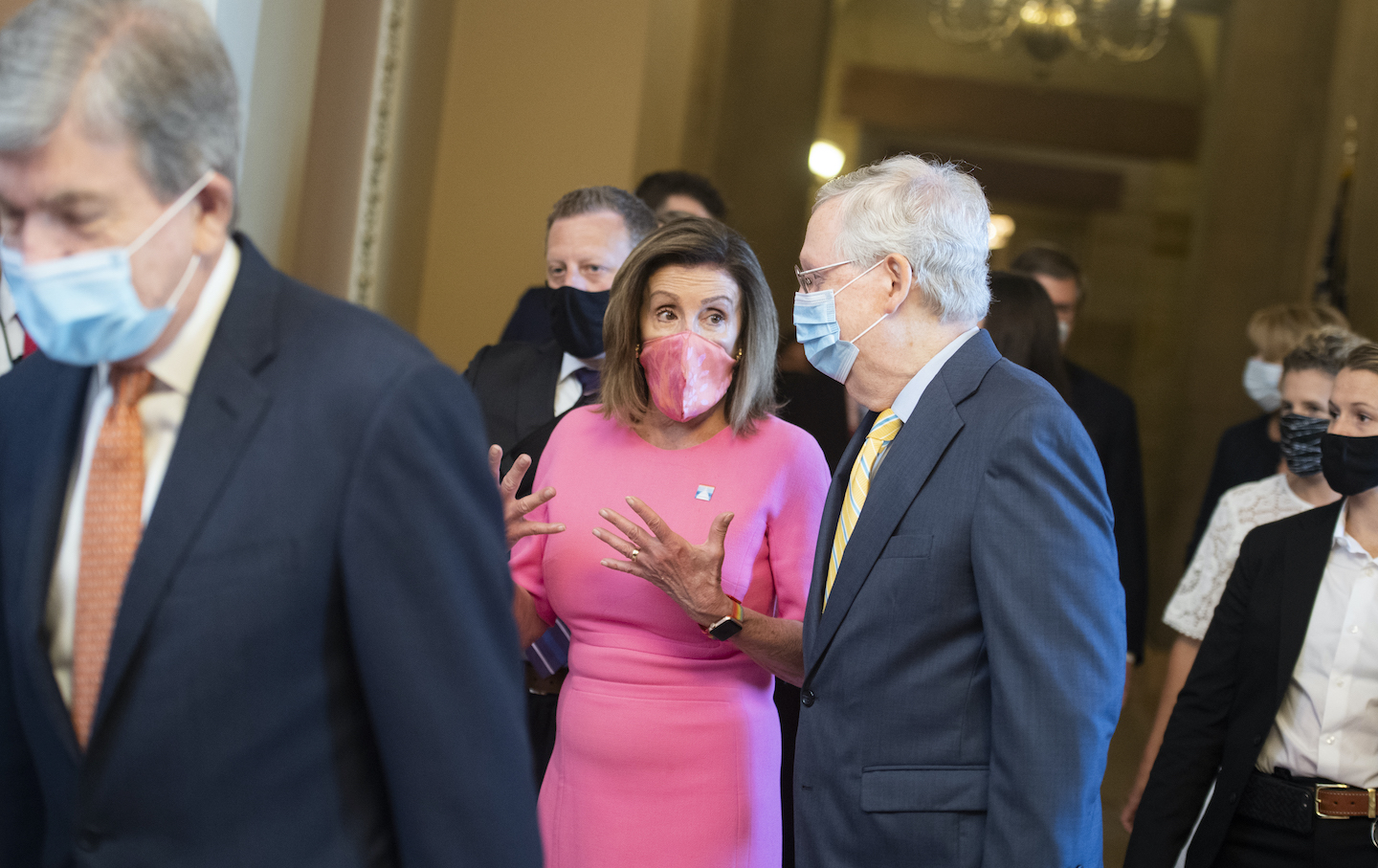 This week, Congress returns to Washington with about three weeks to negotiate and pass the next major pandemic rescue package. It convenes amid the worst public health crisis in a century, the deepest economic downturn since the Great Depression, and the largest protest movement in history. What could go wrong? The gap is yawning between the partisan Senate Republican leaders, backing a delusional president, and the House Democrats, yet even the House bill falls short of what is needed. With elections approaching, standard operating procedure would be to split the difference, use the occasion to lard favors on special interests and deep-pocket lobbies, and get out of town. But under present conditions, failure to deal with the essentials will cost lives as the pandemic spreads and the economy plummets.

Bold intervention is imperative. The pandemic is spiking once more, setting records for new cases daily. Arizona alone has reported more cases than the entire European Union, which has 60 times the population. States across the country are once more running short of testing capacity, hospital beds, and protective equipment, while an estimated 27 million have lost health insurance in the economic fallout. The economic rebound has stalled, yet enhanced unemployment insurance benefits are slated to end on July 25, with over 30 million Americans still drawing unemployment. Eviction and foreclosure moratoriums are nearing their end, with some 20 million renters in danger of eviction by the end of September. States and localities are beginning layoffs—1.5 million to date—in the face of crippling budget crises. America’s communities continue to be roiled by the largest demonstrations in history, with as many as 25 million Americans protesting for Black lives, even as Blacks and Latinos are three times more likely to become infected as their white neighbors and two times more likely to die from the pandemic.

Democrats in the House passed their version of the rescue package—the HEROES bill—two months ago. It went nowhere, because Republican Senate leader Mitch McConnell dismissed it as “aspirational,” regally announcing that he had not “yet felt the urgency of acting immediately.”

Trump and McConnell’s initial plan gives new meaning to the phrase “dying to work.” The president has declared victory over the pandemic, announcing that it is time to open up the economy. Leaving cities and states desperate for resources forces them to rush the reopening. The expiration of unemployment benefits gives workers little choice but to take any job available. Workers who refuse face cutoffs of their benefits. The administration has offered no national safety standards for reopening, and has gutted the enforcement capacities of the Occupational Safety and Health Administration (OSHA), the agency in charge of workplace health and safety. To protect businesses from the dangers of reopening, McConnell promises to provide immunity from lawsuits by workers or consumers who get infected because of their negligence—his one “red line” for the next rescue package.

The brutal class-based cynicism is apparent. In the lockdown, the bulk of non-college-educated workers—disproportionately Black and Latino—were either nonessential and at risk of losing their jobs or “essential,” forced to work and at risk of infection. In the “opening up,” essential workers began losing the hazard pay some received; the nonessential would be forced to take a job, however unsafe, or lose their unemployment benefits. Virginia alone reported 12,000 cases of unemployment benefits being suspended for workers refusing to go back to work. In contrast, managers and executives largely can work remotely, and are safeguarded from the loss of health and of wages both in the lockdown and in the opening.

Politically, Trump and McConnell assumed that businesses would reopen, job growth would take off—a “rocket ship recovery,” President Trump boasted—and Trump could peddle the momentum in his reelection campaign. “Next year,” he told his supporters in Tulsa, “we will have the single greatest economic year we’ve ever had.”

Now the spiking number of cases has given lie to that strategy. Even the chair of the Federal Reserve, Jerome Powell, warns that “it would be a concern if Congress were to pull back from the support that it’s providing too quickly.”

The $3 trillion HEROES bill passed by the House addresses many of the most pressing needs: another check for every resident, extension of enhanced unemployment benefits, better paid sick leave provisions, hazard pay for some essential workers. Importantly, it calls for $875 billion to be apportioned to states and localities to avoid debilitating cutbacks of basic public services. Renters and homeowners would get assistance, while the federal moratorium on foreclosures and evictions would be extended. It would rescue the Post Office from massive layoffs and provide states the resources needed to gear up for vote-by-mail elections. Funds would be appropriated to bolster hospitals and provide resources for testing and protective materials. OSHA would be charged with creating temporary national standards for safe reopening in the pandemic.

Yet even the House bill is at a far remove from how a rational, advanced country would respond to this savage crisis. After having decided to lock down the economy to suppress the pandemic, a rational course of action would enable businesses to pay their workers rather than forcing workers onto the unemployment rolls, along with the insecurity that comes with losing their jobs and their health insurance. A sensible government would guarantee universal health care, or at least universal paid care for any treatment or testing related to the pandemic. Universal paid sick leave would ensure that no one infected would feel forced to work to support his or her family. Clear protective measures and safety standards would be defined—negotiated industry by industry in sectoral bargaining between workers and employers and enforced by elected workplace monitors in every workplace. In exchange, businesses would be reimbursed for the cost of redesigning work and workplaces to make them safe. The return to work would be coordinated with the opening of universal day care and of public schools. Mortgage and rent moratoriums would be extended. Hazard pay would reward those “essential workers” forced to work.

Little of this has been put in place to protect American workers. The House leadership rejected the push by progressives, led by Representative Pramila Jayapal, for a Paycheck Guarantee Act that would prevent mass layoffs and make it easier for businesses to reopen quickly. Medicare for All and even Covid treatment for all were rejected. Instead, the House bill rewards insurance companies by agreeing to reimburse workers for the cost of retaining their health care after being laid off. This is directed through COBRA, a measure that doesn’t cover co-pays, deductibles, or premiums that the unemployed often find prohibitive. With unions weakened, we don’t have sectoral bargaining or worker-management committees. While the House bill calls for OSHA standards, there is no hint of effective health and safety enforcement. There is no national testing regime, and inadequate testing capacities across the states. Reopening of businesses hasn’t been coordinated with provisions for daycare and the reopening of schools.

As negotiations begin, Republicans are in disarray. Trump insists on a payroll tax that even many Republican Senators oppose. He’ll support another “Trump check” that he can sign in time for the fall campaign, but scorns aid to the states and localities. He opposes rescue of the Post Office or funds to help states move to vote by mail, claiming the latter is somehow biased toward Democrats. He is reportedly intent on tying any aid to schools to mandatory reopening, even in states where the virus is exploding. The administration also balks at Republican efforts to provide resources for expanded testing and for ramping up the Centers for Disease Control—presumably predicated on Trump’s lunatic theory that increased testing causes increased cases. And of course, Trump continues to drive Republican efforts to have Obamacare overturned in the courts.

McConnell, more responsive to Republican senators at risk in the fall elections, will want to do something more. Current speculation is that McConnell will seek Republican consensus on a smaller bill—about $1 trillion in total—that would include a smaller one-time Trump check, possibly some extension of enhanced unemployment benefits at a much lower level, some aid to states and localities, and, of course, immunity for businesses from being held responsible by employees or consumers. He’ll then negotiate with Pelosi, using the president’s veto threat to tilt the scale, while larding the bill with the routine outrageous gifts to special interests and powerful lobbies.

House progressives should organize to disrupt business as usual. They could demand that the legislation focus on worker security, requiring the final bill to include what is necessary to sustain working people while the pandemic is being suppressed, what is needed for workers and consumers to be protected as the economy reopens, and what is required so Americans can vote in safety.

If 100 progressive members of Congress united on a set of demands, it would upend the expected course of negotiations. It would surely strengthen House Speaker Nancy Pelosi’s hand—and stiffen her spine. It would pressure Republican senators who can’t afford to return home empty-handed. And it would make clear the stakes involved in what will otherwise be another opaque and smarmy Washington deal. Progressives would have to be willing to keep Congress in session into the normal August recess.

What’s clear is that a tepid compromise won’t be adequate. The administration has bungled both the initial effort to suppress the pandemic and the initial reopening of the economy. Needless to say, the pandemic isn’t listening to Trump’s magical musings that it will simply disappear. And the economy can’t recover until people can safely go back to work. Now is the real moment for “the adults in the room.” Progressives in the House are the only ones in sight.