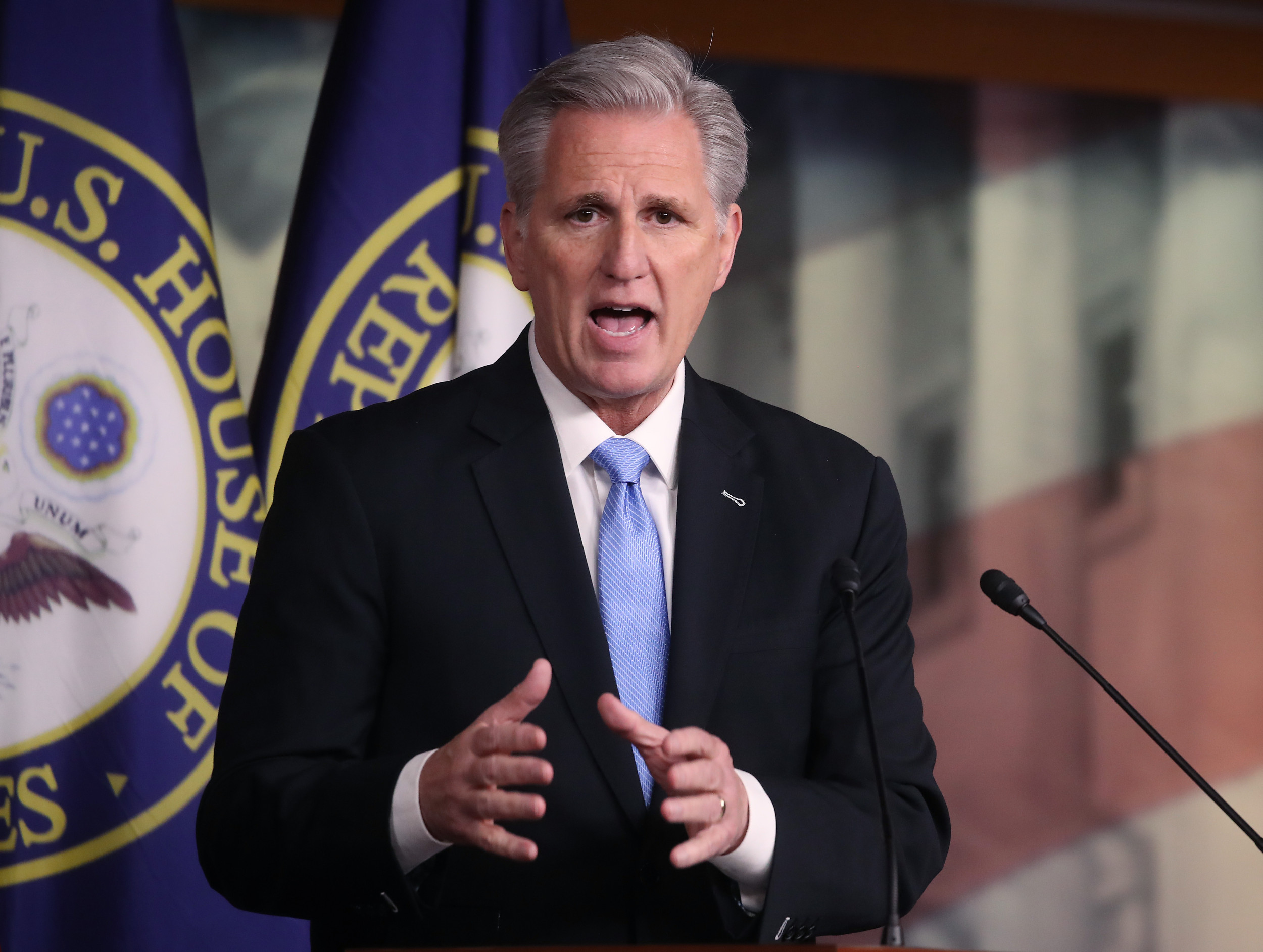 Kevin McCarthy Promises to Block These Lawmakers From Serving on Committees

Kevin McCarthy Promises to Block These Lawmakers From Serving on Committees

House Minority Leader Kevin McCarthy vowed on Sunday to remove some lawmakers from committees that they are currently serving on if he becomes the new House speaker.

During an interview on Fox News’ Sunday Morning Futures With Maria Bartiromo, McCarthy was asked whether or not he plans to keep his promise of removing some Democrats from their roles if he’s elected as the next speaker.

Swalwell has been scrutinized by some Republicans after reports of him being targeted by a suspected Chinese intelligence operative who was seeking to form ties with U.S. politicians. However, the Democratic lawmaker hasn’t been accused of any wrongdoing, according to The Hill.

Meanwhile in 2019, former White House speechwriter Marc Thiessen reportedly said that then-President Donald Trump should “look at withdrawing security clearances for members of Congress” including Schiff and Swalwell because they “openly lied to the American people.”

Swalwell pushed back and tweeted at the time: “I don’t have a security clearance. I’m an elected Member of Congress from a SEPARATE BUT EQUAL branch of government. Sorry,@marcthiessen (&@realDonaldTrump), we don’t live in a kingdom. I won’t be silenced.”

On Sunday, McCarthy added: “You have Adam Schiff, who had lied to the American public time and again. We will not allow him to be on the Intel Committee either.” The House minority leader was referring to Schiff’s alleged support of the Steele dossier, also known as the Trump-Russia dossier, that alleged ties between the former president and Russia, according to Axios.

McCarthy also said during his Fox News appearance that Omar will not be allowed to serve on the Foreign Affairs Committee because of her remarks about Israel, which he described as “anti-Semitic.”

Omar has repeatedly faced backlash over her comments about Israel. In one of her tweets, which has now been deleted, Omar hinted that political support for the country is based on donations from pro-Israel lobbying groups such as the American Israel Public Affairs Committee (AIPAC), according to Axios.

McCarthy tweeted on Saturday: “Last year, I promised that when I became Speaker, I would remove Rep. Ilhan Omar from the House Foreign Affairs Committee based on her repeated anti-Semitic and anti-American remarks. I’m keeping that promise.”

House Republicans recently voted 188-31 by secret ballot to nominate McCarthy for House speaker as the GOP narrowly took control of the House in this year’s midterm elections.

Twitter added a text box of additional context under McCarthy’s Saturday tweet, noting that the “Speaker does not have the power to remove a member from a standing committee. Foreign Affairs is a standing committee” and that a majority vote by the entire House is needed to do so.

Daniel Schuman, policy director at Demand Progress, told Newsweek on Sunday that with House Republicans having the majority, they will dominate the Rules Committee and “can control what measures are considered on the floor and stop measures they don’t like.”

“So it is likely that an incoming Speaker McCarthy, on his own or reflective of the interests of his party, will have the power to avoid appointing anyone they don’t like to any standing committee,” Schuman said, but added that “removal of committee members requires a majority vote on the floor, which incoming Republicans likely would win.”

Under the rules of the 117th Congress, the speaker also has sole power to name the members of the House Permanent Select Committee on Intelligence, which Swalwell and Schiff are part of. However, it’s still unclear whether this rule will remain under the 118th Congress.

“However, it is likely that the Speaker would not name members to the committee he does not want there,” Schuman said. “The practice is that the minority gets to choose their members, but it appears that McCarthy will not honor that practice.”

McCarthy, along with some fellow Republicans, were preparing an agenda to be carried out in case they win the House, including numerous investigations into President Joe Biden’s administration.

“We’re not gonna predetermine what happens. The number one promise we make to the American public is we’re gonna get to the bottom of the truth. And we’ll let the truth take us to wherever it goes and we’ll uphold the law, whatever we need to do,” McCarthy told The Daily Caller earlier this month.