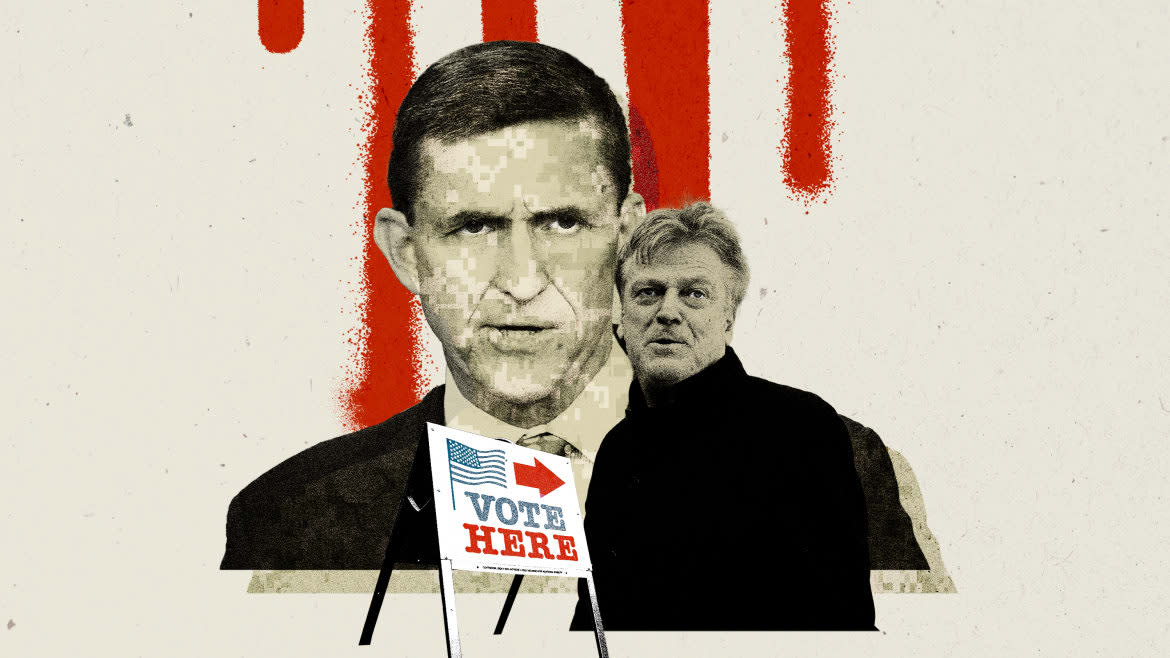 Dubbed “One More Mission,” the group bills itself as a nonpartisan effort to recruit military veterans, as well as police officers and other emergency workers, to monitor polls in an effort to “defend our Constitutional right to vote.”

“Our team wanted to find an apolitical solution, a business solution, if you will,” a man in one recruitment video says.

One More Mission’s promotional materials argue that police and veterans are the most trusted figures in the United States and that they should therefore be used to certify to the public that elections are legitimate. In a late September press release announcing its launch, the group claimed to be a politically independent solution to fears of voter fraud.

“This is just an opportunity for those guys to continue the mission in protecting the integrity of our Constitution,” Travis Wilson, a former Green Beret turned supplement company owner who also works with One More Mission, told The Daily Beast.

In an interview with The Daily Beast, a spokeswoman for One More Mission initially said she wasn’t sure who funded the organization. In reality, despite its claims to be nonpartisan, One More Mission is funded by another group led by some of the most prominent pro-Trump election deniers in the country. In a single sentence on its website, One More Mission reveals that it’s funded by the America Project, a group of people convinced the 2020 election was stolen that is led by Flynn, his brother Joseph, and millionaire former Overstock.com CEO Patrick Byrne.

The America Project has spent millions of dollars on conservative election efforts, many of them aimed at promoting “election integrity.” Now with One More Mission, the group aims to recruit tens of thousands more poll watchers with military and police experience, according to a video Byrne posted online.

In his interview with The Daily Beast, Wilson spoke vaguely about concerns about the election being stolen but declined to name specific instances of fraud in 2020.

‘That, I’m not going to get into,” Wilson said.

Instead, he cited videos of Kari Lake, the Republican candidate for Arizona governor who has promoted false claims of election theft.

But Byrne has no such compunctions. He wrote a book about his election-fraud theories, filled with details about how he believes nefarious forces he calls “goons” stole the election from Donald Trump. In the final days of the Trump presidency, Byrne attended a White House meeting with Flynn and others in which some participants pushed for Trump to declare martial law or use the military to seize ballots.

One More Mission’s website doesn’t mention Byrne or Flynn, instead highlighting members of the group with law enforcement and military backgrounds. But on the fringes of the QAnon conspiracy theorist media ecosystem, Byrne has been on a campaign of his own to recruit police officers and veterans from a conspiracy theory movement premised on the idea that Trump will someday institute a fascist purge and imprison his enemies.

In a late September appearance on the QAnon show “Patriot Streetfighter,” Byrne made clear his support for One More Mission was premised on the idea that the 2020 election was stolen. Byrne said the group had already received interest from roughly 1,000 people just days after its launch.

“We’re living through a psy-op,” Byrne said, explaining his belief that election fraud is part of a “psychological operation” to destroy the United States.

Later in the promotional appearance for One More Mission, Byrne agreed with his pro-QAnon host’s claim that a sinister “cabal” is smuggling murderers and rapists into the United States.

Whatever One More Mission’s purpose in recruiting its poll watchers, it’s clear that Republicans have had trouble with the credibility of some of their earlier star election-fraud witnesses. Mellissa Carone, a purported witness championed by Trump lawyer Rudy Giuliani, was revealed to have a criminal past and saw her offbeat demeanor mocked on Saturday Night Live. In court filings, former Trump campaign lawyer Sidney Powell cited an election-fraud expert who was later revealed to be overstating his military background.

Amateur election-fraud hunting efforts have already sparked at least one law enforcement investigation. Earlier this week, Arizona’s secretary of state referred a complaint to the Justice Department about a group of people following a person who dropped off a ballot.

One More Mission’s backers insist that the group isn’t promoting violence or the carrying of guns around election sites. In interviews with QAnon figures about the group, Byrne mentions that poll monitors must be peaceful.

Some of the group’s promotional videos, though, are more aggressive. One describes the organization as issuing a “call to arms” and shows what appear to be World War II-era newsreels of soldiers marching and planes dropping bombs.