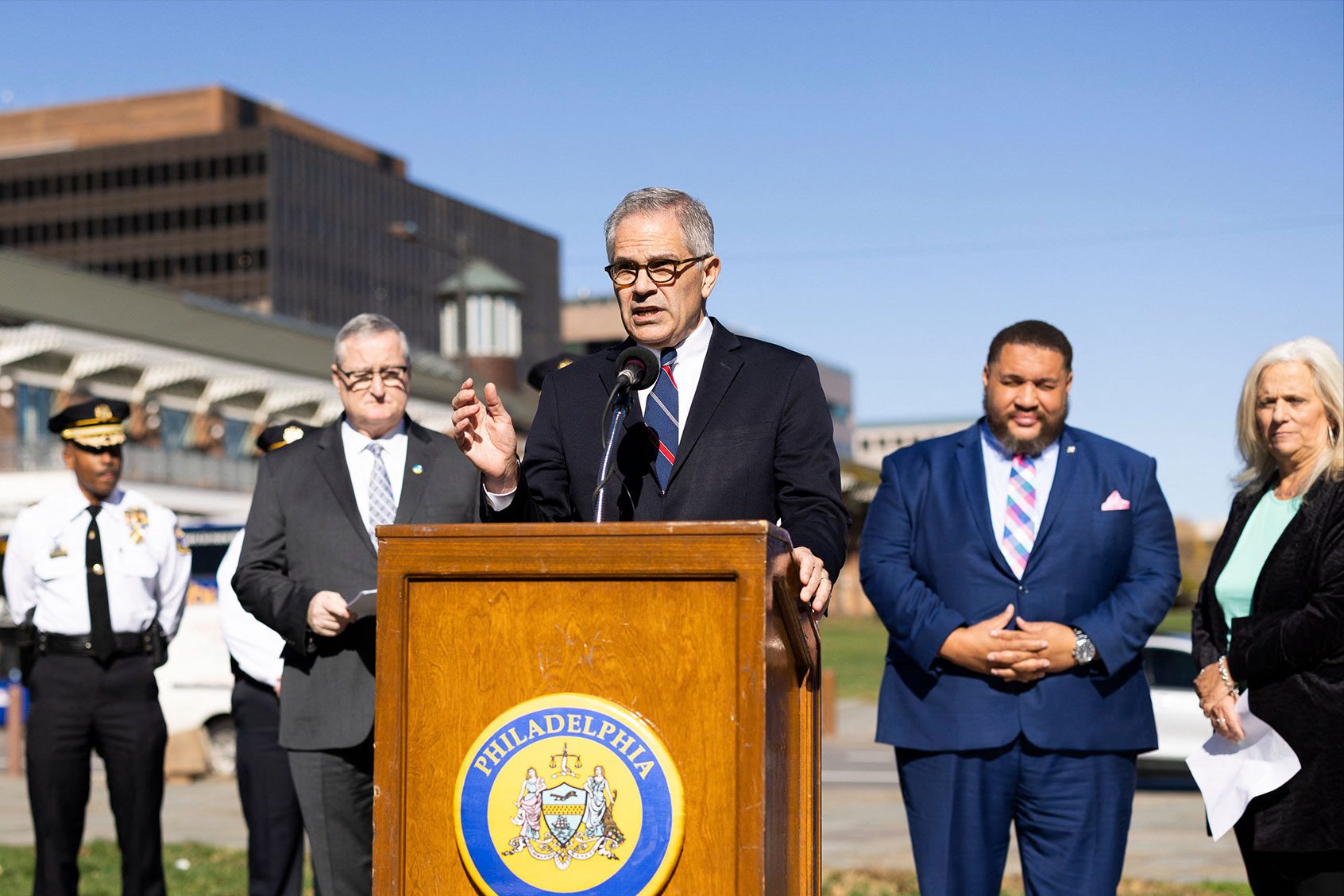 Republicans learned nothing from the midterms: The impeachment of Philly’s prosecutor proves it

Republicans learned nothing from the midterms: The impeachment of Philly’s prosecutor proves it

632
SHARES
1.4k
VIEWS
Share on TwitterShare on Facebook
As the Republican Party takes on its unexpectedly slim majority in the House of Representatives for next year, one question lingers: Did they learn a damn thing from the midterm elections? Yes, they won the House by a handful of seats, but overall the election was a massive disappointment for Republicans, who had swaggered into the midterms expecting not only a sweep of both houses of Congress but a whole bunch of state and local races across the nation. Instead, Democrats won key gubernatorial races in swing states like Pennsylvania, Arizona, Michigan and Wisconsin. retained control of the Senate (and may end up gaining a seat) and if not for a redistricting fiasco in New York might well have held the House too.

It’s no secret that this mostly happened because of Donald Trump and his MAGA nonsense. Indeed, an analysis by Nate Cohn of the New York Times tried to calculate exactly how much being a MAGA true believer cost Republican candidates: It was around five percentage points, Cohn says, easily enough to make the difference between winning and losing in many key races. This realization is kicking off a genuine civil war in the GOP. One side wants to cut Trump loose at last, stop touting the Big Lie about the 2020 election and scale back on the culture war antics. The other side, however, clings to MAGA dogma with religious fervor, believing that cannot fail but can only be failed by RINO phonies. All eyes are closely watching the newly minted House majority and their presumptive speaker, the ever-hapless Rep. Kevin McCarthy. Will they finally tone down the Dumpster fire a tiny bit, or can we expect the next two years to be nothing but bug-eyed conspiracy theories, frivolous “investigations” of Joe Biden’s family and Cabinet members and threats to sabotage the world economy if Biden refuses to gut Social Security?

In the House, early indicators suggest that Team MAGA Forever is getting the upper hand. But for even more definitive evidence, it’s useful to look beyond the Beltway and toward the normally sleepy state capital of Harrisburg, Pennsylvania. In the state legislature there, Republicans have made it abundantly clear they have no intention of learning anything from the massive rebuke voters offered their party in the midterm elections.

Hours before it was announced that Democrats have won a majority in the state House for the first time in 17 years, the lame duck legislature in Pennsylvania made its last stand for MAGA by impeaching Larry Krasner, the district attorney in Philadelphia. While understandably unknown to most people outside Pennsylvania, Krasner has become a favorite punching bag in right-wing media, for his anti-racist and progressive views on fighting crime. Republicans paint him as “soft on crime” and blame him for the rise in gun violence in Philadelphia, even though a likelier culprit is the lax statewide gun laws passed by Republicans.

Krasner, for his part, is painting the impeachment as a direct attack on the right of Philadelphians to choose their own leaders. “History will harshly judge this anti-democratic, authoritarian effort to erase Philly’s votes — votes by Black, brown and broke people in Philadelphia,” he said in statement.

This impeachment of Krasner sews together two of the biggest and most racist themes that fuel the MAGA movement: A belief that anti-racist movements like Black Lives Matter are to blame for rising crime rates, and a belief that voters in racially diverse urban areas are “frauds” who are “stealing” elections from white conservatives.

Philadelphia was one of the cities at the center of Trump’s false allegation that Democrats had stolen the 2020 election from him. During his drawn-out coup attempt following that election, Trump sent several of his surrogates — most famously Rudy Giuliani during the “Four Seasons” debacle — to paint the citizens of Philadelphia as illegitimate voters and demand that the state legislature throw their ballots out. In targeting Philadelphia — along with other cities with large Black populations, such as Detroit and Milwaukee — Trump essentially implied that those cities are less deserving of democratic representation than whiter, more rural areas of their state. (Biden also won Pittsburgh, but Trump wasn’t nearly as interested in demonizing that city, which is more than 60% white.)

Along with Chicago, New York and other racially diverse cities, Philadelphia has also become central to right-wing media efforts to blame crime on the Black Lives Matter movement. Even in his supposedly “serious” campaign announcement speech Tuesday, Trump made the grotesque claim that “The blood-soaked streets of our once-great cities are cesspools of violent crime.” In reality, the spike in crime in the past couple of years seems largely attributable to the pandemic. Gun sales rose during the lockdown and schools were closed, meaning the streets saw an influx of weapons and bored young people, an almost perfect prescription for rising crime. As the pandemic has begun to recede, homicides have also started to decline.

As a progressive prosecutor in a racially diverse city, Krasner makes the perfect hate object for the MAGA movement. He easily beat a Democratic primary challenger and then won the general election. Impeaching him is a hapless symbolic gesture, but also an omen of what’s likely to come when Republicans take over the House of Representatives in January. Joe Biden will be subjected to endless investigations and may well be impeached, for the same reason Krasner was: Right-wing outrage over losing an election to a racially diverse coalition.

Impeaching Krasner is symbolic — and an omen of what’s ahead when Republicans take over the House: They may well impeach Joe Biden, because they’re furious they lost an election to a racially diverse coalition.

Perhaps no other state illustrated the voter distaste for MAGA politics in the 2022 midterms more than Pennsylvania. In the two biggest statewide races, Republicans nominated candidates tightly aligned with Trump: Dr. Mehmet Oz was his hand-picked candidate for the open U.S. Senate seat, and state Sen. Doug Mastriano, the gubernatorial candidate, is a hardcore Trump loyalist who helped foment the Jan. 6 insurrection and has numerous links to Christian nationalist causes. They both got creamed, even though Oz was running against Lt. Gov. John Fetterman, who suffered a serious stroke that provoked ugly media coverage suggesting that he was unfit to serve. (Although Fetterman has some difficulty with auditory processing, his mental capacity is fine.)

Pennsylvania is a classic swing state in terms of demographics and party registration, but its legislature is controlled by the GOP and packed with Trumpers — including Mastriano, who literally paid for charter buses to send MAGA loyalists to D.C. ahead of the Capitol insurrection. As Spotlight PA reported, “Dozens of GOP state lawmakers — including those in leadership — also attempted to stop or delay Biden’s electoral votes from being counted.”

You might have thought Republicans would respond to losing their 17-year grip on the state House by dialing back the MAGA madness. Absolutely not: They forged ahead with their plan to impeach Krasner, who has not been accused of any crimes. This follows on the heels of a Republican threat to impeach Democratic Gov. Tom Wolf for implementing public health measures during the pandemic, and various impeachment threats against Philadelphia election officials, based on Trump’s false claims of fraud during the 2020 election.

“They just don’t think Philly has a right to govern itself,” Krasner has stated. He’s right, and that’s pretty much the through-line of all these Republican efforts. Rather than engaging in self-examination when they lose elections, they attack the right of other Americans — especially those who aren’t white — to participate in the democratic process. Krasner’s impeachment is just a symptom of this larger problem. We shouldn’t expect any Republicans, anywhere, to respond to these midterm losses by actively trying to deradicalize their party. If only. They’ll just double down on conspiracy theories and lies, in a last-ditch attempt to delegitimize the voters who keep rejecting them.