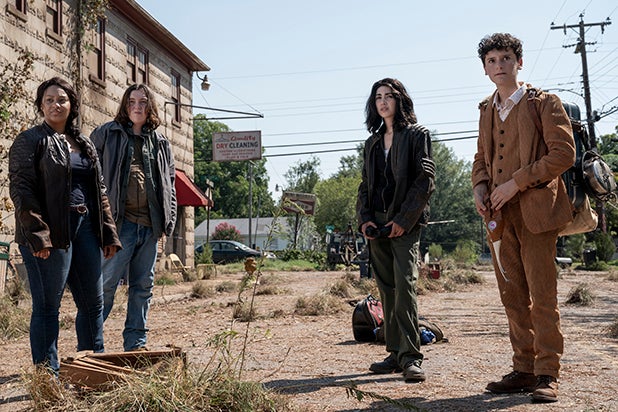 AMC’s newest “Walking Dead” series, “World Beyond” has a new premiere date. The second spinoff of AMC’s popular zombie franchise will now debut Oct. 4 at 10 p.m., right after the return of “The Walking Dead.”

Chris Hardwick revealed the date during the “The Walking Dead” panel as part of [email protected] on Friday. The show also released a new trailer, which you can watch above.

Originally slated to premiere back in April, “World Beyond” was delayed early-on in the COVID-19 pandemic, which brought film and TV production to a standstill in March. Though the season had completed filming prior to the production shutdowns, a few of the season’s episodes have post-production work that remained unfinished.

Co-created by Scott M. Gimple and showrunner Matt Negrete, “The Walking Dead: World Beyond” centers on the first generation raised in the post-apocalyptic world. The series, which is being billed as a two-season limited event, follows two sisters who, along with two friends, leave a place of safety and comfort to brave dangers, known and unknown, living and undead on an important quest.

TheWrap is spending the week with [email protected] — check out all of our ongoing coverage here.

Ahead of Netflix’s new zombie-drama “Black Summer,” we ranked zombie TV shows from worst to best

Netflix’s new zombie apocalypse series, the “Z-Nation” prequel “Black Summer,” is premiering Thursday, and what better way to welcome it than to rank other “undead” TV shows of the last few years from worst to best. We included the Rotten Tomatoes scores with each ranking for comparison. Share your thoughts in the comments section at the bottom.