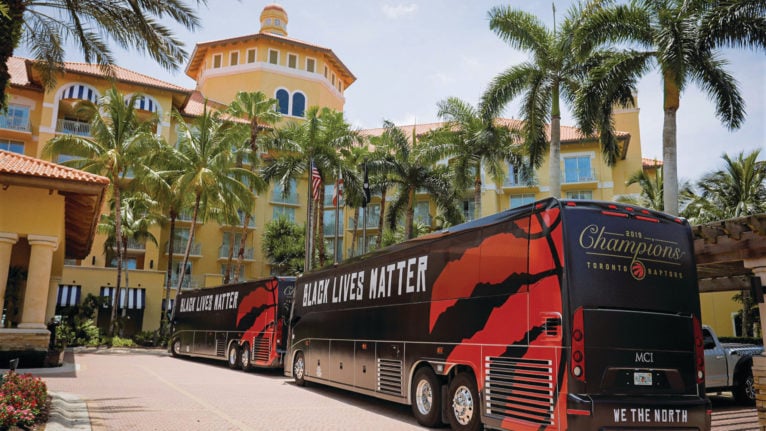 What Americans tend to get wrong about racism in Canada

What Americans tend to get wrong about racism in Canada

Matthew Amha is freelance writer and a journalist with the CBC based in Toronto.

Since a triad of murders of unarmed Black people in the United States, the flames of anti-racism and direct action against systemic racism burn anew. For professional sports, this means that leagues dominated and sustained by the labour of Black athletes are now obliged to take seriously the oft-ignored concerns of those same people. Along with increased attention, the moment has also initiated a corporate scramble of sorts, for major leagues to invest in symbolic shows of solidarity: whether it’s big-money marketing campaigns, on-court insignia, or pseudo national anthem protests.

To that end, the Toronto Raptors—the lone NBA franchise outside the United States—made their way to the re-started NBA season in a bus emblazoned with the dictum of our times: “Black Lives Matter”.  To most Black people the phrase is an affirmative statement of fact. To many, it’s a movement, and to others, it has become the subject of corporate sloganeering. But days after this elaborate entrance, Raptors team president Masai Ujiri sat for an interview with a nationally televised basketball show in the United States. The conversation began with three-time NBA Champion Draymond Green, who posed the following: “You guys have on your bus ‘Black Lives Matter,’ and as a Canadian team it doesn’t directly impact your team because you’re in an entirely different country. What made you guys take a stand?”

Ujiri paused and went on to describe the process of driving a bus that boldly affirmed Black life through central Florida, but he tidily stepped his way around the claim underlying Green’s inquiry—the idea that Canada’s Black Lives Matter struggle was somehow impersonal or tangential, and the real struggle for Black life was uniquely American.

The nature of Green’s question reveals a deep misunderstanding of this historic juncture.

The truth is: Canada and the United States share centuries-old twin histories of Indigenous genocide, mass displacement and chattel slavery. We share in histories of sanctioned segregation: theirs called “Jim Crow”, while ours has been referred to as “Jacques Crow”. It’s a history that extends to the internment of the Japanese, the creation of laws explicitly designed to ban Black immigration, and the discriminatory practice of redlining.

Much of this has been obscured by a mono-vocal telling of Canada’s national story, one that inundates our classrooms and commentariat. It positions us somewhere between the primordial brutality of America, and the paternal coloniality of Britain or France. As it relates to the U.S. and the question of racism, Canada is depicted as a north star. We are the good guys.

MORE: A letter to the Canada-U.S. border: They said it would be different on this side.

It’s a historical assessment that distances Canada from responsibility and complicity in the franchise of racism. It has recreated the country in the vision of a kind of apologia—that we were bad, but not as bad as them. Sure we’re a little racist, but they are worse. Under the aegis of this story, we have conditioned the world to view Canada as a historical tabula rasa, rather than an extension of the same instrument used to marginalize and oppress.

It is not well known that in the 18th century enslaved Black people in Canada smuggled themselves into the United States in search of a freedom denied to them at home, or that many would follow after the American Civil War. The fact Canadian racism served as a rubric for Apartheid South Africa is largely unremarked. As is the fact that the first reported race riot in North America is believed to have happened in Atlantic Canada. Even the institution of “stop and frisk” is presented as uniquely American, despite the fact some Canadian police departments practiced it at higher rates. Not many understand the extent to which both nations share a national story rooted in the logics of settler colonialism. The landed gentry that turned mass death and human bondage into an engine of nations in America, did the same here, too.

In addition to Canada’s history of systemic racism, we are bombarded by the spoils of these centuries-old systems today. Despite a dearth of race-based data in this country, much of the same empirical evidence and anecdata that Americans tout as confirmation of systemic racism exists here, too. Racial disparities in wealth and family income, incarceration, educational opportunity and poverty persist, meanwhile disparities in infant and maternal mortality are harder to substantiate due to a lack of data. Canada’s inner cities also suffer under similar regimes of disproportionate police surveillance, harassment and violence. Our neighbourhoods are residentially segregated and our schools are manifestly underfunded.

MORE: Hal Johnson: ‘Yes, there is systemic racism in Canada’

Across every data set we use to measure success in Canada, Black and Indigenous people sit at the bottom. The fact recalcitrant provincial leaders deny the existence of systemic racism—largely emboldened by a country that refuses to catalogue data on race—only further instantiates its existence. Denialism is a core feature of systemic racism.

The advent of American exceptionalism has long operated to justify atrocity, both abroad and at home, and function as a compass for the development and expansion of U.S. nation building. The trouble with appropriating these same racist logics to exceptionalize American racism, at the exclusion of Black Canadians, should be clear: American cultural hegemony has no place in anti-racist work.

For Black Canadians, Dr. King’s criticism of the “white moderate” is as poignant an assessment of the Canadian political class as it is America’s. W.E.B Du Bois’ concepts of the “wages of whiteness” and “double consciousness” encapsulate, at an elemental level, the Black Canadian experience. When James Baldwin says “the details and symbols of your life have been deliberately constructed to make you believe what white people say about you” he is talking about us, too. The analysis of American civil rights has always, if not explicitly, included Black Canada.

Sixty years ago, Malcolm X talked about a people “lost in the wilderness of North America” to describe the condition of Black people. The imagery is borrowed from his time with the Black nationalist group “Nation Of Islam”, but alludes to the fact Black folks were stolen from their original lands and forcibly transported across the middle passage to unfamiliar shores as property, by men who used their stolen labour to construct experiments in democracy that recognized them as less than human. Malcolm was an unabashed internationalist, and made an effort to connect his civil rights struggle at home to parallel struggles in Africa, Latin America, Asia and North America. He, like others, understood the invention of “racecraft” to justify and adorn power beyond America’s 50 states.

In the throes of uprising, it is important to make this point: Black Canadians and Black Americans are bonded by a blood-soaked history of slavery, violence, segregation, displacement, and incarceration. We are bonded by our struggle and resistance. Our stories are linked from the mother continent to the plantation, the underground railroad, the penitentiary, and the hereafter. Neither racism nor state brutality ends at the 49th parallel, but I cannot condemn my American contemporaries for believing the national story of a nation whose history is perched atop a summit of myth and fiction.

As goes America, so too goes Canada. The struggle remains indivisible.