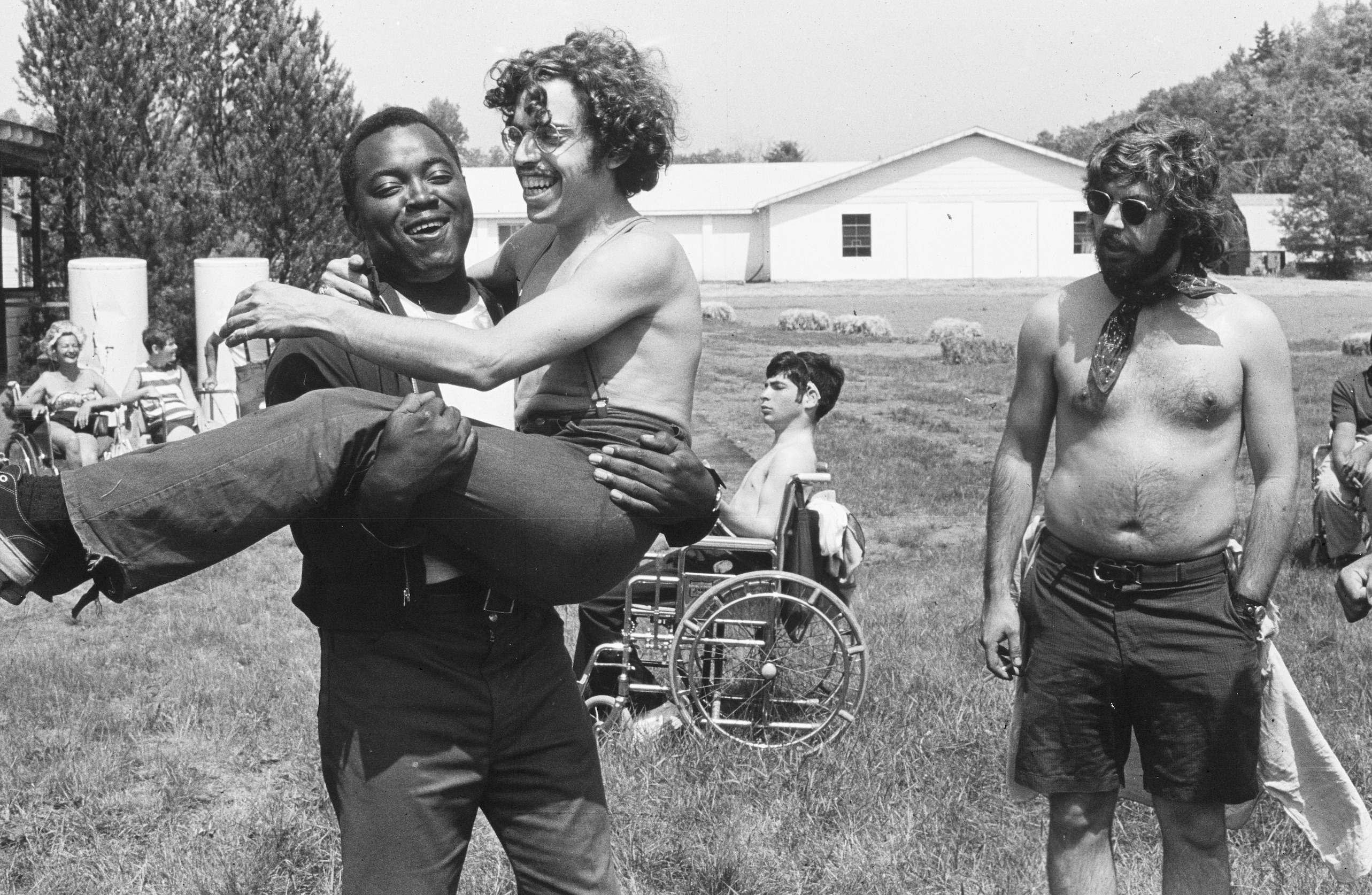 Judy Heumann, Brad Lomax, Chuck Johnson. Can you picture their faces? Although these three activists each played a crucial role in the fight for the rights of disabled Americans, who represent the largest minority group in our society, none are world-famous the way Rosa Parks is, or Gandhi. This Sunday, the Americans With Disabilities Act turns 30 years old. A movement is underway to recognize the undersung heroes who brought it to life. It’s also calling attention to the way their aggressive and effective direct action tactics could serve as a model for the protest movement currently rebelling against President Donald Trump’s racist, sexist, and ableist regime.

Before the ADA, there was the 1920 Smith-Fess Act. Often referred to as the Civilian Rehabilitation Act, it was based on the Soldiers (Veterans) Rehabilitation Act of 1918, which provided support for veterans returning home from World War I. The 1920 update extended vocational guidance, occupational training and therapy, and prosthetics, among other services, to all Americans with physical disabilities, rather than just those who had served in wars. Fifteen years later, the Social Security Act would provide financial assistance for people unable to work, as well as medical and therapeutic services for children; it also made the “Rehabilitation” legislation permanent.

Congress amended disability legislation piecemeal over the years, but in 1973 a bold new section was inserted into a new and updated Rehabilitation Act. Section 504 was a clause modeled on the 1964 Civil Rights Act, making discriminating against an “otherwise qualified handicapped individual” illegal for organizations receiving federal funds. In April 1977, frustrated by President Nixon’s refusal to enforce Section 504, the American Coalition of Citizens with Disabilities called for activists across America to occupy federal buildings en masse. Their aim was to get Joseph Califano, U.S. secretary of health, education and welfare, to sign a set of regulations to make Section 504 actually work.

Judy Heumann, a Brooklynite from East Flatbush who had poliomyelitis as a child, worked as a counselor in the 1960s at Camp Jened. The subject of Crip Camp, a documentary released by Netflix in March and executive produced by Barack and Michelle Obama, among others, Camp Jened was a summer retreat in the Catskills for young people with different physical needs. It was also where Heumann got her taste for organizing. In the film, you can see her wrangle a group of garrulous teenage campers into agreeing on what to have for dinner (lasagna), leadership beaming out of her like electric light. A wheelchair user herself, Heumann would in 1970 appeal the New York City Board of Education’s decision to deny her a teaching license on the grounds of her disability, and win.

Brad Lomax also appears in Crip Camp. The New York Times published Lomax’s obituary earlier this month in its “Overlooked” column, 36 years after his death from multiple sclerosis complications. He was a Black Panther, co-founding the organization’s Washington, D.C., chapter in 1969 and in 1972 helping to organize the first African Liberation Day demo. He also collaborated with Heumann on one of the movement’s most remarkable achievements, the San Francisco 504 Sit-In of 1977.

In response to the American Coalition of Citizens with Disabilities’ call for protests against Nixon’s refusal to enforce Section 504, activists across America occupied federal buildings. The most intense action came out of San Francisco, where Judy Heumann—by then the founder of Disabled in Action, advocating for the independent living movement—managed to keep 150 people, some with complicated medical needs, in residence at the city’s Health, Education, and Welfare offices, for 25 days in all. But it was Lomax who organized for the Black Panthers to feed the group, providing a central artery of care that kept the action strong. It’s still the longest sit-in ever to take place at a federal building. Califano eventually caved, in part because the 1977 television workers’ labor strike meant that news coverage of the sit-in was reaching an unusually large television audience.

Chuck Jackson was Brad Lomax’s caretaker for his multiple sclerosis–related disabilities—the Times obit calls him an “attendant.” But he was a Black Panther, too, and he also provided personal care to several other people at the occupation besides Lomax. Of the three activists I’ve mentioned here, he’s by far the least widely known. By contrast, Heumann is almost (but not quite) a star: She went on to become an adviser in the Clinton and Obama administrations and this year published an autobiography titled Being Heumann: An Unrepentant Memoir of a Disability Rights Activist. Lomax is somewhere in the middle, a giant in the history of coalitionary organizing tactics, whose legacy is only now reaching a new generation, through films like Crip Camp.

Section 504 proved to be a crucial step toward the Americans With Disabilities Act: It recognized people with disabilities as a distinct minority group with particular interests and vulnerabilities. It also overturned the archaic assumption that people with physical differences were somehow both excluded and exempt from the reality everybody else lived in: Not hiring a disabled person was now technically discrimination—not, as many at the time thought, merely a logical outcome. These are tenets we take somewhat for granted in our legal system, but it was only through the mutual support and echoing agendas of multiple advocacy groups that America ever got there.

The uneven distribution of celebrity between Heumann, Lomax, and Jackson is evidence of how poorly we recall even the most recent history, and partly the result of straightforward whitewashing. As the disability rights consultant and founder of RampYourVoice Vilissa Thompson put it in 2016 when she created the hashtag #DisabilityTooWhite, “[T]here is a lack of representation and diversity within the disability community from the organizations that are supposed to empower us as individuals.” Seeing a Black disabled woman on television is still a rare event. Historians of activism, meanwhile, have argued that most accounts of 504 activism have neglected the role of Black power in its success, in a way that has marred our understanding of American social politics in the 1970s. In his landmark 2010 article, “Is disability studies actually white disability studies?” disabilities studies scholar Chris Bell further argued that this whitewashing is the result of the too-neat way history books slice up and present protest movements: Terms like “the largest minority,” while powerful in theory, can also obscure differences within the disabled experience.

The campaign for rights for disabled people has never been separate from Black Power or from feminism, as anybody who has taken care of another person’s intimate needs will know: It’s a subject that touches on all other subjects. Everybody has a body.

The 1977 sit-in leveraged support from groups that opposed the war in Vietnam, those who wanted to modernize school buildings, and those who were fighting for women’s rights. We’re all mortal and vulnerable to injury and change, after all, and disability is the one marginalized identity that all of us are likely to hold at some time during our lives, if only in babyhood or old age. Crip Camp is one example of an effort among a number of academics and writers currently working to correct the whitewashed historical record of disability rights advocacy.

The ADA’s thirtieth anniversary this year comes at a troubling time. The Act itself is more under threat than ever, as the Trump administration attracts discrimination lawsuits from federal employees while grossly mismanaging the Covid-19 crisis, a health emergency guaranteed to cause long-term health problems in many thousands of Americans. It’s a dark bookend to a term that, in its first summer (three days after the twenty-sixth anniversary of the ADA), saw the sitting president of the United States perform a physical impression of a journalist with arthrogryposis, on camera, at one of his own rallies, to make his supporters laugh.

As large numbers of Americans put their bodies between the police and their fellow citizens in Portland, Oregon, this past week, it was Chuck Jackson I thought of. On a daily level, his caretaking labor consisted of small actions, repeated many times, to facilitate his comrades’ comfort. It’s not headline-grabbing work, and Jackson is not one of the people at the center of Crip Camp. Instead, he facilitated others. Jackson’s commitment to physical justice is the luminous antithesis of Trump’s violent nationalism. It’s a reminder from across the decades that equality is not only an idea, but a practice that scales from the smallest of interactions to the largest dreams we’re capable of dreaming.