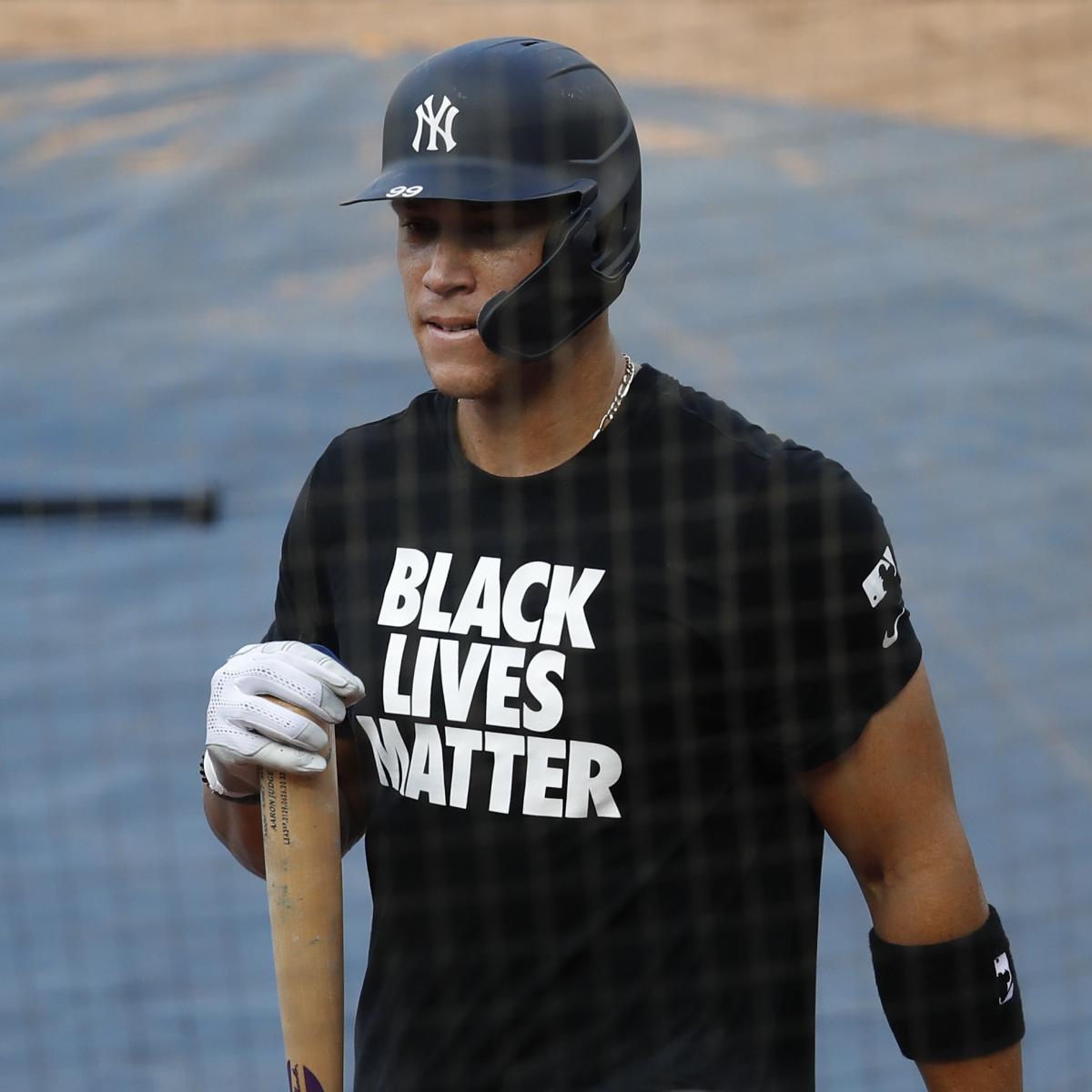 Aaron Judge on Yankees Wearing BLM Shirts, Kneeling: We’re Together on This

Aaron Judge on Yankees Wearing BLM Shirts, Kneeling: We’re Together on This

“We got a lot of guys in this clubhouse with different beliefs and different feelings and different walks of life and they’re from different countries. We wanted to respect all of that. As a team, we made a united decision to kneel right before the anthem. … There’s a lot of injustice in this world and a lot of bad things going on. We just wanted to show that we’re aware of it and start the conversation and start the change.”

Every player from the Yankees and Nationals knelt along the baseline prior to the anthem:

Every player on the #Yankees and #Nationals takes a knee prior to the National Anthem. https://t.co/kbYeanpusp

The players also held a piece of black cloth as a tribute to George Floyd and the Black victims of police brutality, per ESPN’s Howard Bryant:

Today, and every day, we come together as brothers. As equals, all with the same goal – to level the playing field. To change the injustices. Equality is not just a word. It’s our right!

Today we stand as men from 25 nations on 6 continents.

Today, we are one. https://t.co/vKUGdRfwgQ

Philadelphia Phillies star Andrew McCutchen helped develop the idea and proposed it to MLB officials. He issued a statement Thursday, per James Wagner of the New York Times:

McCutchen and other players led this initiative independent of MLB, but went to the league office for helping finalizing it before every game. In a statement, he said: https://t.co/2eJAqlJa34

Judge also referenced former Oakland Athletics catcher Bruce Maxwell, who was the first MLB player to kneel during the national anthem during the 2017 season.

Maxwell made just 18 MLB appearances in the two subsequent seasons, and an anonymous MLB executive told the San Francisco Chronicle‘s Susan Slusser in December 2018 that teams might avoid signing him because of his kneeling protest.

MLB received criticism for waiting nine days to make a formal statement on the killing of Floyd in Minneapolis at the hands of police officers. Speaking with Slusser last month, Maxwell thought it was emblematic of the lack of support he received from MLB.

“Knock me if you want, but I think MLB finally came out and said something because so many people were hounding them to say something,” he said. “It doesn’t shock me they were the last sport to say something. When I did my thing, my team supported me at the time, but MLB didn’t really back me.”

Judge said players “just didn’t have the support yet” with regards to social activism when Maxwell kneeled and that they weren’t organized enough or communicating enough.