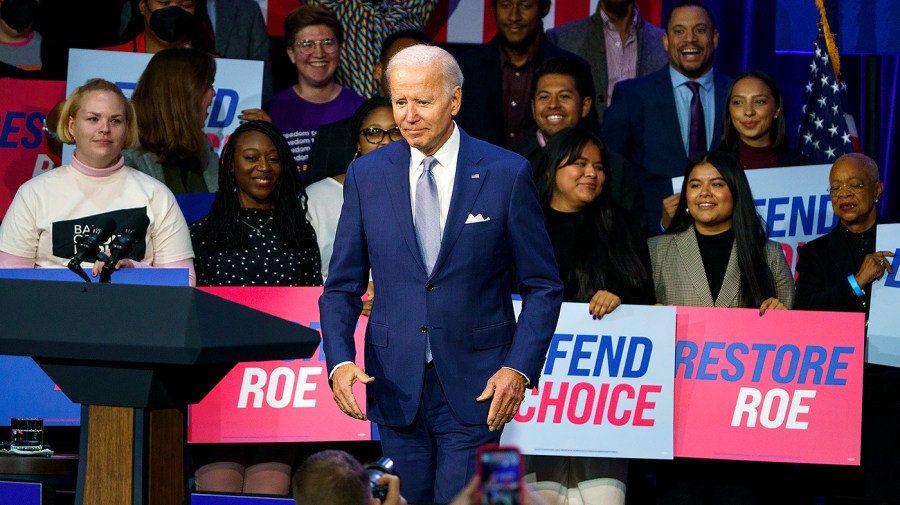 President Biden arrives at a Democratic National Committee event on Tuesday, October 18, 2022 at the Howard Theatre in Washington, D.C., to discuss the upcoming midterm elections and its’ importance to restoring abortion protection after the recent Supreme Court decision to strike Roe v. Wade.

President Biden on Friday will blast Republican lawmakers for attacks on his student loan forgiveness plan in remarks at Delaware State University.

“He will … call out Republican members of Congress attacking his efforts to give middle-class families some additional breathing room even as these very officials had hundreds of thousands of dollars of their own pandemic relief loans forgiven by the Federal Government,” according to a White House official.

The plan, unveiled in August, has been faced with multiple lawsuits, as well as criticism from Republicans over how much it will cost taxpayers. It is set to forgive up to $10,000 in federal student loan debt for borrowers earning under $125,000 and as much as $20,000 for borrowers who received Pell Grants.

Biden will give an update on the launch of the plan on Friday “on the heels of multiple courts rejecting attempts by Republican officials to block the Biden Administration’s student debt relief plan,” the official said.

Applications officially opened on Monday and, as of Tuesday, 12 million Americans had applied for forgiveness.

On Thursday, Justice Amy Coney Barrett denied an emergency bid by a group of Wisconsin taxpayers for the Supreme Court to block the program by ruling that the cancellation plan illegally encroaches on Congress’s exclusive spending power. Also, a federal judge dismissed a legal challenge from six Republican-led states to the plan, ruling that they do not have standing to sue.

Earlier this week, the Cato Institute sued the Department of Education over the plan, also claiming it is illegal because Congress didn’t authorize it.

On Friday, Biden will also highlight the role of Historically Black College and Universities and his administration’s role in strengthening them. Delaware State University is a HBCU and over 75 percent of its students received a Pell Grant.

“The President will highlight the life-changing impact student debt relief will have on millions of working- and middle-class Americans, particularly borrowers of color,” the official said.