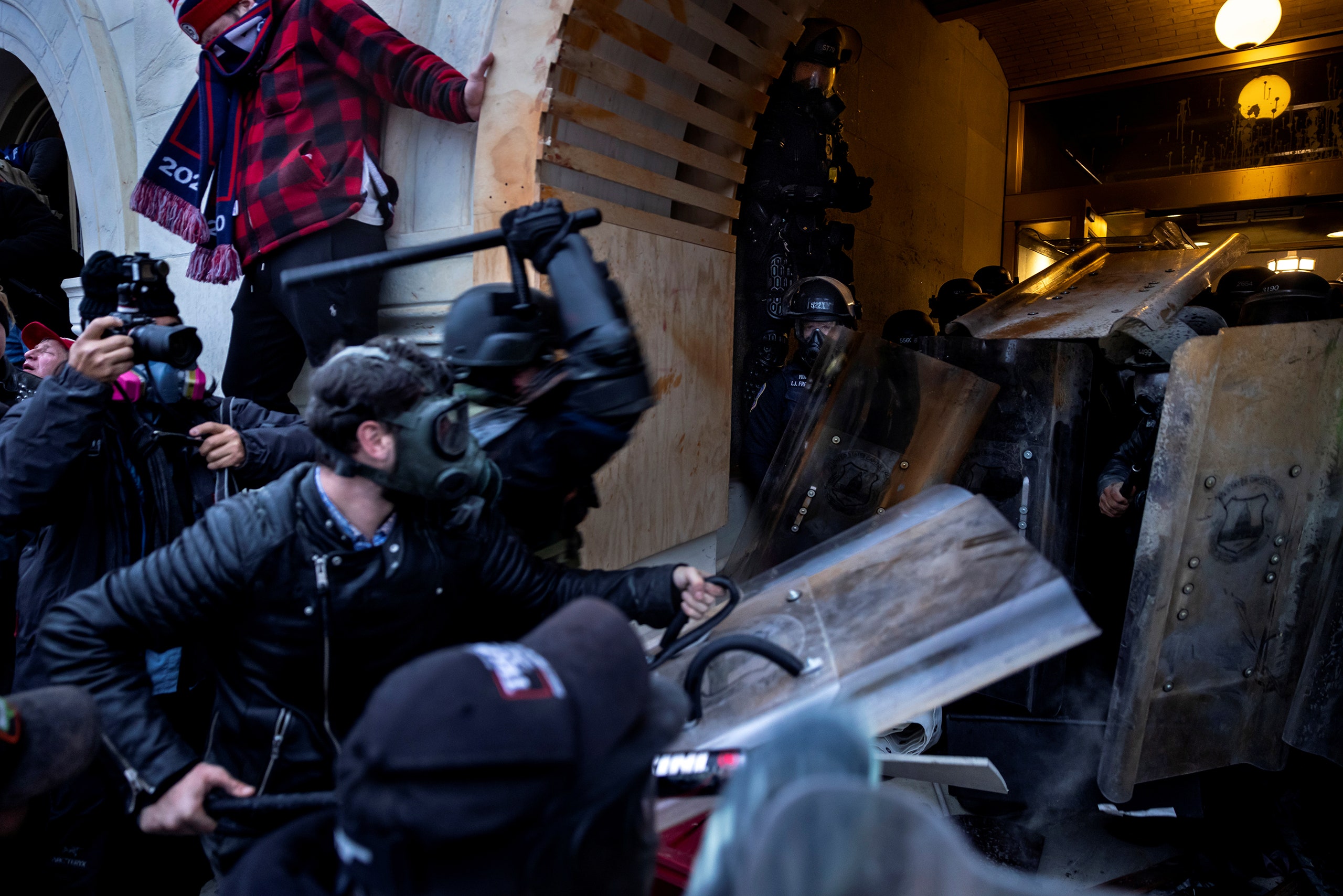 How Trump Supporters Came to Hate the Police

How Trump Supporters Came to Hate the Police

In early August, after agents executed a search warrant at Mar-a-Lago, Donald Trump’s private club in Palm Beach, Florida, allies of the former President were quick to villainize the F.B.I. Although the raid had recovered more than a hundred classified documents, at least eighteen of which were labelled “Top Secret,” Republican pundits and politicians questioned its legitimacy and denounced the federal agency as a “gang of dangerous criminals,” “wolves,” the “Gestapo,” “the K.G.B.,” and “the enemy within.” Calls for retribution spread online. A forty-two-year-old Trump supporter named Ricky Shiffer wrote, “You’re a fool if you think there’s a nonviolent solution.” Shiffer then attempted to enter an F.B.I. field office in Ohio, equipped with body armor, an assault rifle, and a nail gun. After triggering an alarm, he fled the scene in his vehicle, and a high-speed pursuit ended in a shoot-out with state troopers, during which Shiffer was killed. Three weeks later, Trump gave a speech in which he called F.B.I. agents “vicious monsters.”

Given the broad support that Republicans have historically enjoyed from law enforcement, their escalating hostility toward the F.B.I. may seem paradoxical. Right-wing extremists, however, have always viewed state agents as pernicious antagonists, and so the institutionalization of that mind-set should come as no surprise as the G.O.P. embraces the ideas and attitudes of its radical flank.

In the early days of the pandemic, as Trump supporters began mobilizing against lockdowns and other public-health measures, much of their rage was directed at law enforcement. On April 30, 2020, heavily armed conservatives descended on the Michigan state capitol, in Lansing. Facing off against police outside the barred doors of the legislature, they denounced the officers as “traitors” and “filthy rats.” Some members of the mob belonged to the Michigan Liberty Militia, whose founder later told me that he had created the outfit in 2015, after “seeing what happened with the Bundys.” Cliven Bundy, an elderly rancher in Nevada, had declared war on the government when the Bureau of Land Management impounded his cattle over his refusal to pay outstanding grazing fees. After a tense standoff in which Bundy supporters surrounded law-enforcement agents and trained rifles on them from nearby hilltops, the Bureau of Land Management released the livestock and withdrew from the area.

Following the incident in Lansing, Mike Shirkey, the Republican Senate majority leader in Michigan, condemned the protesters as “a bunch of jackasses” who had used “intimidation and the threat of physical harm to stir up fear and rancor.” Shirkey seems to have quickly realized, though, that such principled nonpartisanship was no longer tenable in American politics. A couple of weeks later, at an anti-lockdown rally in Grand Rapids, I watched him publicly laud the Michigan Liberty Militia and assure its members, “We need you now more than ever.”

In the weeks that followed, resentment of law enforcement intensified sharply, with anti-lockdowners perceiving individual officers as complicit in an oppressive, tyrannical order. “They deserve to wear the Nazi emblem on their sleeves!” one retiree told me of the state police who’d served a cease-and-desist order to a barber violating the governor’s suspension of personal-care services. “People like me used to fucking back you!” a veteran shouted at police handing out citations at a gathering in Lansing. “But you are trash!”

Then, on May 25, 2020, a police officer murdered George Floyd, in Minneapolis. I left Michigan to cover the ensuing demonstrations and riots, and when I rejoined the anti-lockdowners I found that their stance toward law enforcement had undergone a dramatic reversal. That June, I attended a demonstration outside the capitol orchestrated by the Michigan Liberty Militia and a right-wing organization called the American Patriot Council. Ryan Kelley, a co-founder of the latter group, climbed the steps and pointed to several officers who were monitoring the scene. Not long ago, I had witnessed anti-lockdowners furiously berate these very same men. “We say thank you for being here,” Kelley told them now. “Thank you for standing up for our communities.”

The volte-face reflected a larger pattern of contradiction. The original Michigan Militia was created, along with a wave of other white paramilitary groups, in 1994, following the government’s botched attempt to arrest the survivalist Randy Weaver at his cabin, on Ruby Ridge, in northern Idaho. The deadly siege, less than a year later, of the Branch Davidian compound, in Waco, Texas, and the Clinton Administration’s subsequent ban on assault weapons reinforced a right-wing narrative that white Christians were under attack. After Waco, the Michigan Militia ballooned to an estimated seven thousand members. In 1995, on the second anniversary of the Waco massacre, Timothy McVeigh, a white supremacist who’d attended several Michigan Militia meetings, detonated an enormous truck bomb in Oklahoma City, killing a hundred and sixty-eight people. The leaders of the Michigan Militia decamped to Alaska, and the organization collapsed. Over the next decade and a half, right-wing militants across the U.S. remained largely dormant. Meanwhile, under President George W. Bush, the federal government enacted unprecedented infringements on personal privacy and other individual rights while the F.B.I. employed extraordinarily invasive surveillance and investigatory techniques against law-abiding citizens, largely on the basis of their religion. The reason that none of this provoked anti-government extremists was simple: the targets of the overreach were Muslims.

Similarly, after George Floyd was killed, conservatives repudiated the national uprising that demanded police reform and accountability, choosing instead to “back the blue.” As President Trump and his allies portrayed demands for racial justice as the sinister work of subversives intent on sowing chaos—much as segregationists had dismissed civil-rights activists as Communist agitators—backing the blue became analogous with opposing the left. After my stay in Michigan, I spent a month covering antifascist protests in Portland, Oregon, where demonstrations against the local police department were punctuated by clashes with Trump supporters, including members of the Proud Boys, who presented themselves as allies of law enforcement. As anti-lockdowners had shown in Michigan, however, this alliance was conditional and tended to break down whenever laws intruded on conservative priorities. Right-wingers rationalized the inconsistency by assigning the epithet “oath breaker” to any American in uniform who executed his duties in a manner they disliked.

About a month after the 2020 Presidential election, at a rally in Washington, D.C., I followed hundreds of Trump supporters as they marauded on the streets around the White House, assaulting pedestrians, vandalizing Black churches, and seeking to engage antifascists in fist fights. The Metropolitan Police, the Park Police, and the Capitol Police did their best to keep the two sides separate. Their interference enraged the Trump supporters, who called the officers “piggies,” “cunts,” and “pieces of shit.” Some of the insults were indistinguishable from those shouted by leftists in Portland.

“Vigilante justice will be king!”

Many of these same Trump supporters returned to D.C. on January 5, 2021, and by then it was clear that law enforcement would no longer be exempt from their belligerence. Online, Proud Boys made plain that their days of backing the blue were over. “Fuck these DC Police,” one commented. “Fuck those cock suckers up. Beat them down. You dont get to return to your families.”

The next day, I followed thousands of people up the National Mall after Trump’s incendiary speech from the Ellipse. On the west side of the Capitol, two broad flights of granite steps descended from an outdoor terrace on the third floor. In anticipation of Joe Biden’s Presidential Inauguration, huge bleachers had been erected over the steps, with a ten-thousand-square-foot platform constructed between them; the bleachers had been wrapped in ripstop tarpaulin, creating a sort of monolith that functioned as a rampart. Trump supporters climbed the steps and began cutting through the fabric with knives. Officers blocked an opening at the bottom of the bleachers, but they were outnumbered and obviously intimidated as the mob pressed against them, screaming insults, pelting them with cans and bottles. Some people shoved and punched individual officers; others linked arms and rammed their backs into a row of riot shields, their eyes squeezed shut against blasts of pepper spray. A few Trump supporters used their own chemical agents against the police. The stone slabs underfoot were smeared with blood. “You’re a bunch of oath breakers!” a man making his way along the police line barked through a bullhorn. “You’re traitors to the country!”