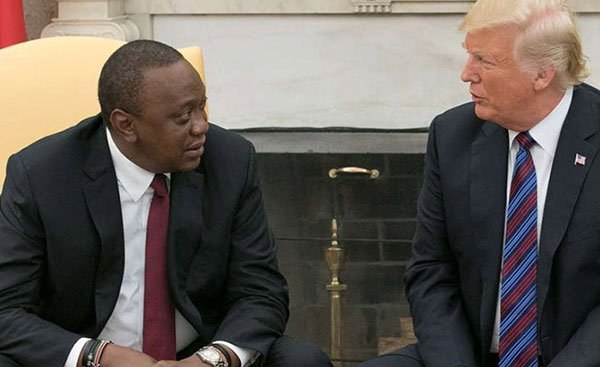 Kenya: Lazarus Amayo Formally Takes Over as Envoy to U.S.

Kenya: Lazarus Amayo Formally Takes Over as Envoy to U.S.

Lazarus Amayo on Friday formally took up his duties as the 18th Kenyan ambassador to the United States.

Ambassador Amayo presented his credentials to President Donald Trump at a ceremony at the White House that took place more than a year after President Kenyatta appointed him.

The seasoned diplomat, who previously served as Kenya’s United Nations envoy, will manage relations with the US at a time of high expectations for the bilateral engagement.

In their remarks on Friday, President Trump and Ambassador Amayo both cited the recent launch of negotiations that could culminate in a historic Kenya-US free trade and investment agreement.

For the United States, it would be the first such pact with a sub-Saharan nation.

The increasingly close ties between the two countries include cooperation in fighting Al-Shabaab and other efforts to promote peace and security in East Africa.

Ambassador Amayo told President Trump that Kenya stands ready to continue its counter-terrorism partnership with the US.

On his part, Mr Trump reiterated the US commitment to helping degrade Al-Shabaab and to assisting Kenya with maritime security initiatives.

The Head of State noted that collaboration between the two countries will be further boosted when Kenya assumes its non-permanent, two-year seat on the UN Security Council in 2021.

During a separate function at the Kenyan chancery in Washington, Ambassador Amayo expressed hope that the US will soon be able to resume its role as the leading source of tourism to Kenya.

Mr Amayo succeeds Robinson Njeru Githae as Kenya’s US envoy. Mr Githae had held that job for five years prior to being transferred to lead the Kenya embassy in Austria.

Get the latest in African news delivered straight to your inbox

In addition to the UN post, Mr Amayo served as Kenya’s High Commissioner to the United Kingdom for four years.

Mr Amayo, arguably one of Kenya’s most decorated envoys, has been serving as Kenya’s permanent representative to the UN since 2018.

Previously, he was Kenya’s High Commissioner to the United Kingdom from 2014 to 2018, serving also as Permanent Representative to the International Maritime Organisation (IMO) and the Commonwealth.

From 2010 to 2014, he was the Director of the Division for Europe and the Commonwealth at the Ministry of Foreign Affairs.

Between 2006 and 2010, Mr Amayo served as High Commissioner to Zambia and Malawi, and as Permanent Representative to the Common Market for Eastern and Southern Africa (Comesa).

Friday’s ceremony at the White House also featured the formal installation of ambassadors to the US from Zambia, South Africa, United Kingdom, Guatemala, Moldova and Benin.