The killer whale recently spotted swimming in the waters off Cape Cod is a huge 30-foot bull known as Old Thom.

Just under two weeks ago the killer whale was spotted swimming 40 miles east of Nantucket, Massachusetts. Fisherman Jerry Leeman managed to capture a video of the rare sighting. In the footage, an orca can be seen swimming alongside his fishing boat.

Killer whales are commonly seen off the West Coast of the U.S, however, it is incredibly rare to see them in New England—these waters are usually great white shark territory.

Gregory Skomal, a marine biologist at the Massachusetts Division of Marine Fisheries, told Newsweek that this particular individual has actually been spotted a handful of times in the last decade.

The killer whale known as Old Thom is a huge bull, and according to the Orca Conservancy, he reaches up to 30 feet in length. The orca is usually always alone.

Old Thom stands out as orca are highly social animals and usually travel in pods. The solitary orca has been sighted off the coast of northern New England and Eastern Canada before—however it is still a rare appearance. While he is never usually seen with other orcas, Old Thom has been spotted keeping the company of white-sided dolphins. According to the whale’s Wiki Fandom page, this is an “affiliative relationship.”

“Not much is known about killer whales in the western North Atlantic. They appear to be somewhat rare south of Nova Scotia, but have been documented as far south as the Caribbean,” Skomal said.

Old Thom is well known for breaching near vessels, as he does in Leeman’s footage.

Despite killer whales being socially complex animals, Josh McInnes, a marine ecologist and killer whale researcher, told Newsweek that male killer whales have been known to become “nomadic” and “roam vast distances on their own.”

“Transient killer whale off the U.S West Coast are frequently encountered on their own. Killer whales are second to humans in having the largest distribution and can be found in all major ocean basins. They are most common in temperate and polar latitudes but can also be encountered in subtropical and tropical regions,” McInnes said. “The male killer whale off Nantucket might belong to a small population that frequents large ranges off the eastern United States or Canada.”

When the killer whale was first spotted, it was around the same time a few great white sharks appeared to be making their way to the area on their annual migration route.

According to OCEARCH’s shark tracker, one or two had already arrived in the area.

Killer whales and great white sharks have been known to come into conflict before.

Bob Hueter, chief scientist at OCEARCH, previously told Newsweek that most great white sharks have not arrived in the area just yet. But he said that when these two predators come face to face “there can be conflict.”

“Orcas have been seen harassing white sharks and even killing them at times,” he said.

Hueter said if the orca sticks around or others appear this summer, there could be some effects on the white sharks.

Skomal said that the white sharks are drawn close to the Cape Cod shore by the “growing presence of seals” in the area—a common prey for the species.

“They generally start to arrive in mid to late May, but much depends on water temperature. The bulk of the population doesn’t come until July—peak months are August, September, and October,” Skomal said. 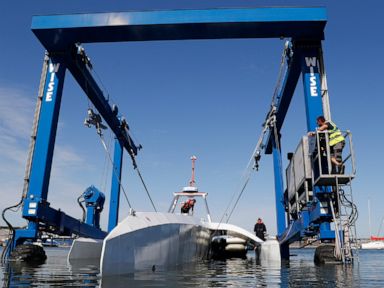