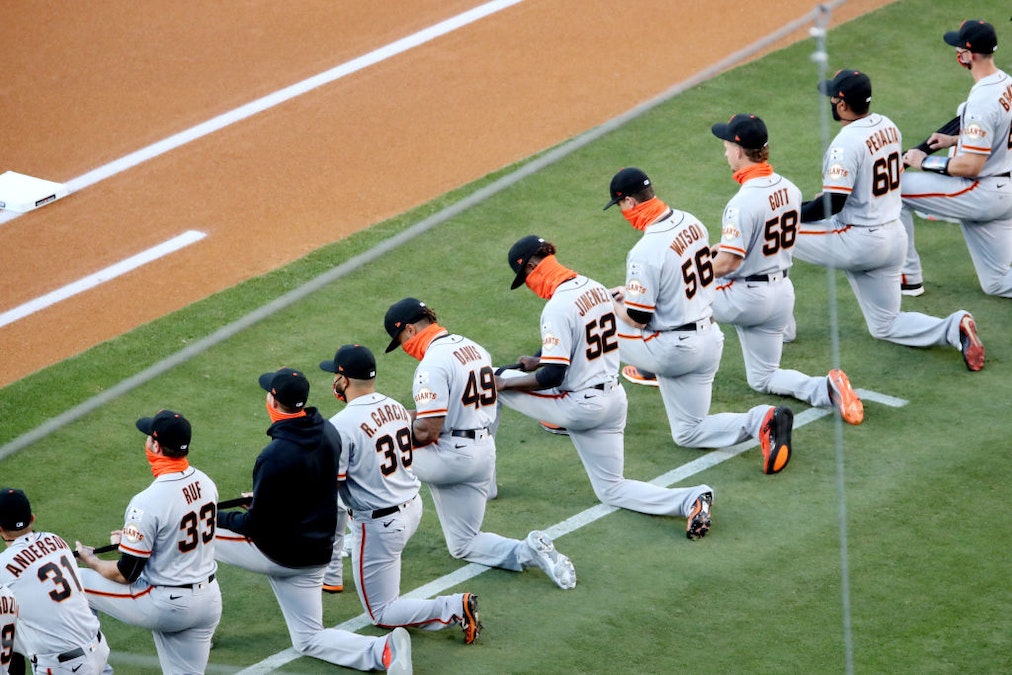 The only baseball player who refused to kneel during a moment honoring Black Lives Matter in Dodger Stadium on Thursday claimed he did so because of his Christian faith.

Sam Coonrod, a 27-year-old reliever for the San Francisco Giants, explained his act by saying he only kneels before God, according to TMZ Sports.

“I’m a Christian, like I said, and I just can’t get on board with a couple of things that I have read about Black Lives Matter.”

“I meant no ill will by it,” Coonrod maintained. “I don’t think I’m better than anyone. I’m a Christian. I just believe I can’t kneel before anything besides God — Jesus Christ.”

“I chose not to kneel,” he added. “I feel that if I did kneel, I would be being a hypocrite. I didn’t want to be a hypocrite. Like I said, I didn’t mean any ill will toward anyone.”

Most players from the New York Yankees, Washington Nationals, LA Dodgers, and San Francisco Giants who played Thursday took hold of a black ribbon and knelt in honor of Black Lives Matter before their games, and many also knelt during the national anthem.

Coonrod, who said he had to make his decision about kneeling before he was able to speak with teammates, afterward spoke with Giants manager Gabe Kapler, according to NBC Sports. He said of his boss, “He’s not going to get mad if I disagree with him. I think that’s part of the problem nowadays. People get mad whenever someone disagrees. I’m not mad at someone that decided to kneel. I think it’s not too much to ask that I just get the same respect, you know?”

Kapler told TMZ, “The one thing that we said is we were going to let people express themselves. We were going to give them the choice on whether they were going to stand, kneel, or do something else. That was a personal decision for Sam.”

Players from both teams kneel together in unity before tonight’s National Anthem. #OpeningDay #NYYforNY pic.twitter.com/ptW2FgfzUe

Black Lives Matter, which has been at the forefront of the protests roiling the nation in the wake of George Floyd’s death, has come under scrutiny for the political ideology of its founders. Sen. Kelly Loeffler (R-GA) tweeted Wednesday, “I’ve been canceled for calling the BLM political organization what it is: A Marxist group.” Loeffler linked to an article from the New York Post that highlighted a 2015 interview in which BLM co-founder Patrise Cullers admitted that she and the co-founder of the organization “are trained Marxists.”

“We are super-versed on, sort of, ideological theories,” Cullers said. “And I think that what we really tried to do is build a movement that could be utilized by many, many black folk.”

I’ve been canceled for calling the BLM political organization what it is: A Marxist group.

The Daily Wire is one of America’s fastest-growing conservative media companies and counter-cultural outlets for news, opinion, and entertainment. Get inside access to The Daily Wire by becoming a member.