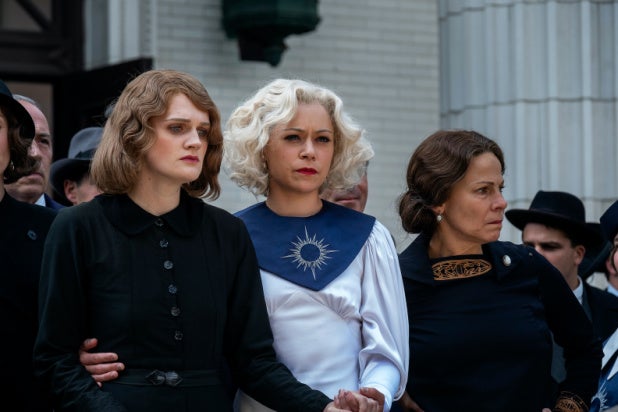 There’s so much that just doesn’t add up — at least not yet! — about the mystery of who killed Charlie Dodson on “Perry Mason.” The HBO series is as much about what the characters are going through as they experience this entire situation as it is the mystery itself, so it’s been this very slow, but steady, stream of info about what went on here. Is there a big conspiracy? I don’t know.

But perhaps the biggest clue, to me, about what lies in store comes from a plot thread that hasn’t fit neatly into the narrative just yet: that of Sister Alice (Tatiana Maslany) and her church.

This particular aspect of “Perry Mason” reminded me of a bit from the movie “Kiss Kiss Bang Bang.” In that film the characters discuss a series of trashy pulp detective novels, which all feature a uniform plot structure that is remarkably similar to how the story plays out in the movie. (“Kiss Kiss Bang Bang” was written and directed by Shane Black, so that sort of meta element of the plot was to be expected.)

Also Read: ‘Perry Mason’: What We Know About Who Killed Baby Charlie Dodson, Through ‘Chapter 4’

What defined the structure of those books was that there would be two seemingly unrelated plot threads that would merge as the story resolves. Parts of the story that feel like tangents turn out to be crucial. Not that this idea was original to “Kiss Kiss Bang Bang” — this sort of thing is inherent to many mystery stories.

And everything involving Sister Alice feels exactly like that. Through four episodes I can’t tell what the purpose of her story is. The church itself is clearly relevant, with Charlie Dodson’s grandfather being one of the church elders, and with one of the kidnappers being a church employee. But the focus on Sister Alice in particular has been a mystery of its own.

I’m not saying Sister Alice is irrelevant to everything else going on in “Perry Mason,” though. What I’m saying is that it’s not at all clear yet how she’s relevant. But her promise to bring baby Charlie Dodson back to life might be the clue.

Before “Chapter 5” I probably would have said that I don’t think it’s possible at all that an actual, honest-to-god resurrection could happen on “Perry Mason.” But after Sister Alice appeared to possibly heal a man who couldn’t walk, I’m now open to the possibility — the small possibility — that maybe she could actually do it. Maybe that baby is coming back to life.

But, realistically, I’d say there’s about a one-percent chance of that happening. But I think this thread is important in some way to the big picture, so there are other ways this could play out that might appear like a resurrection to characters on the show.

And in that vein, I think instead that the show could reveal in the last few episodes that baby Charlie never died in the first place.

It’s not impossible to imagine. The kidnappers themselves were surprised when Charlie turned up dead. Detective Ennis (Andrew Howard), along with whoever else is involved in the conspiracy, could have replaced Charlie with a replacement body, a recently deceased baby perhaps. The parents would be so traumatized in the moment that they might miss any telltale signs that this is not Charlie.

And with police involved in the cover-up they could just swoop away the body and never give anyone a good look at it before they buried it.

And then Sister Alice could “bring him back to life.”

Now, it’s tough to know how Sister Alice is involved, or even what her motives might be. I have no idea what the big picture is. But I figure that if she’s gonna proclaim to everyone that she’s going to bring a dead baby back to life, in a scene that served as the climax for the episode it happened in, then it seems pretty likely that that proclamation is relevant to the big picture.

Fortunately, we won’t have that long to wait before we find out everything. There’s only three more episodes of “Perry Mason” left to go.