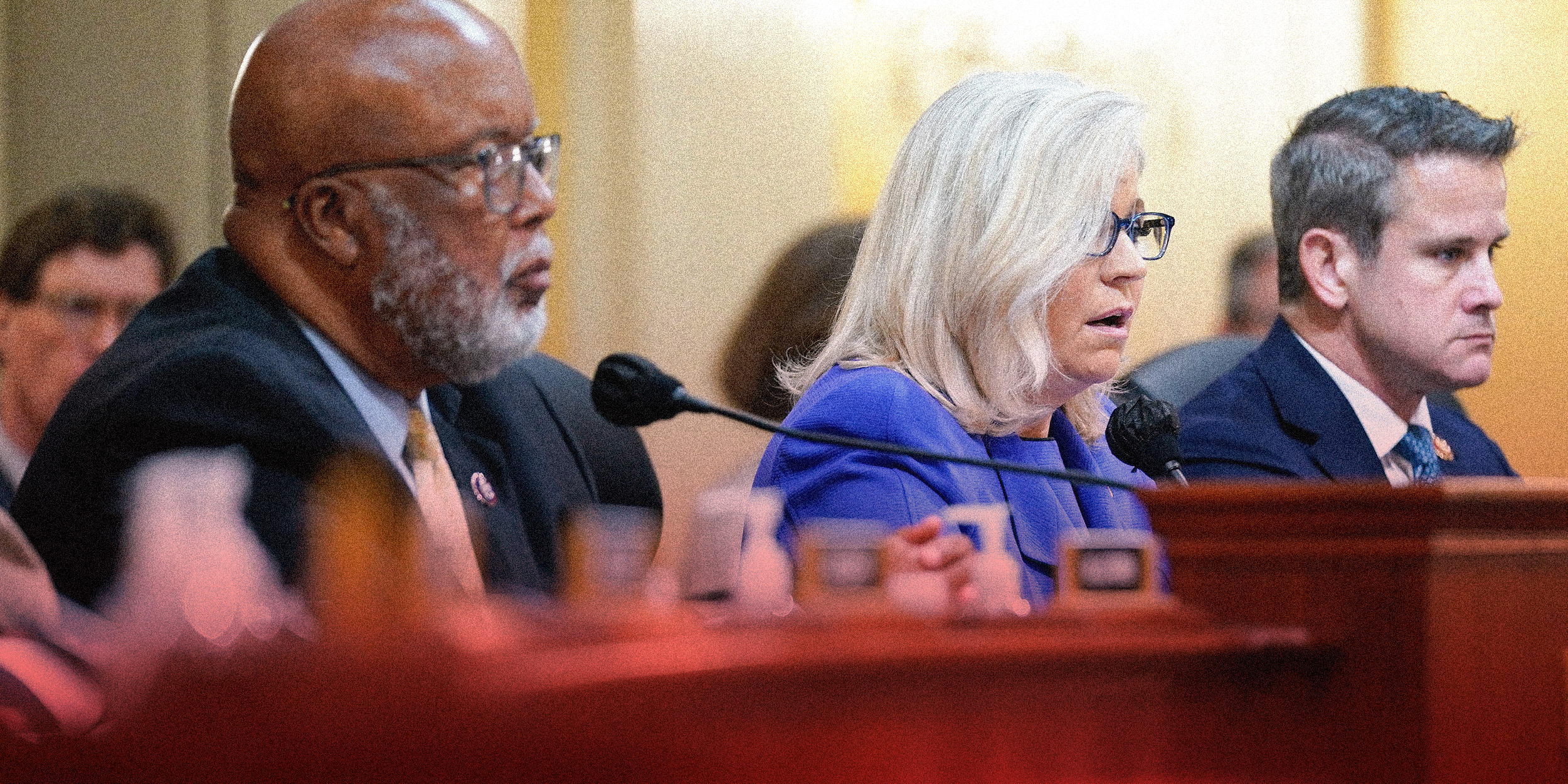 On Monday, the House committee investigating Jan. 6 reconvened for its second public hearing with the apparent intention of establishing beyond doubt that former President Donald Trump had no reasonable expectation that his claims of election fraud were true. Indeed, almost everyone around him knew them to be false, and told him as much.

President Donald Trump had no reasonable expectation that his claims of election fraud were true.

One by one, administration officials and Republican election lawyers testified that the supposed irregularities Trump and his allies fixated on weren’t irregularities at all. The election “was not close,” as GOP election attorney Ben Ginsberg recalled. States like Michigan and Pennsylvania were not host to measurable election fraud — certainly not anything that would change the results in those states. Indeed, former Attorney General Bill Barr found the claims made by Trump loyalists, like those in Dinesh D’Souza’s film allegedly uncovering a massive plot to rig the 2020 election, “2,000 Mules,” laughable (which is to say, he literally laughed at them during his deposition).

Viewers of Monday’s hearing were privy to few new revelations about the events leading up to what occurred on the day the 2020 election results were certified. That’s partly because the committee committed itself to re-establishing what it had already alleged during its first hearing on Thursday night. Broadcast to the nation in prime time and capturing the attention of some 20 million viewers, that hearing did provide the public with new insight into how the attack on the Capitol unfolded.

The committee’s leaders alleged on Thursday night (and subsequently emphasized on Monday) that Trump acted with malice to incite a mob around claims of election fraud he had no reason to believe were true and, indeed, likely knew to be false. They found that organized insurrectionist groups functioned as shock troops ahead of the mob that ransacked the Capitol. The committee’s members alleged that the president abdicated his constitutional duties to protect the legislature against the founding charter’s domestic enemies, and they claimed that elected members of Congress sought presidential pardons for their role in the events leading up to the attack.

This brings us to the three avenues of attack. Republicans’ first objection to Thursday night’s proceedings took shape even before the first hearing: The committee was going to be an unserious, glitzy production. We would be forced to witness what Sen. Marco Rubio, R-Fla., demeaned as a “Hollywood-paid political advertisement” for the Democratic Party. “They moved this thing to prime time. They hired a producer to put it on,” he said. “This is not a fact-finding mission.” But at the outset of proceedings, led by the somnolent Rep. Bennie Thompson, D-Miss., it became clear that we were not privy to an overproduced spectacle.

At that point, Republicans predisposed to attacking the committee shifted to insisting that this sober, unadorned inquest was too languid for prime time. “[I]f the Democrats wanted a flashy, compelling, engaging beginning to the hearing, they are failing miserably,” former Trump administration official Mick Mulvaney remarked. But even Mulvaney later conceded that the video presentation of the riots was “stunning” and “powerful.” In sum, the hearings interposed prosecutorial dispassion with galvanizing and dramatic visuals. If there was a sweet spot to hit, that was it.

The second Republican objection to these proceedings centered on the notion that this was a one-sided affair. All the lawmakers on the dais, regardless of their partisan affiliations, were of the same mind when it came to what happened on that fateful day. True enough, but that’s not because there are no alternative views to express about what happened on Jan. 6. It is because this is what Republicans in Congress wanted.

As the trauma of the day’s events faded and Republican voters regrouped around the partisan imperative to absolve Trump of blame for any of it, a 2021 Morning Consult survey published about six months after the insurrection found that the rank-and-file GOP had begun convincing themselves of a series of fictions. The poll found that Republican voters increasingly blamed President Joe Biden more for the attack on the Capitol than they did Trump, and that the insurrectionists were not ideologically aligned with the American right. These voters and their representatives in Congress didn’t want clarity; they wanted to “move on” from this episode with their preferred ambiguities intact. That sentiment led Republicans in the legislature to nix what would have been a more judicious, bipartisan inquiry conducted independently of Congress.

Republican voters increasingly blamed President Joe Biden more for the attack on the Capitol than they did Trump.

Republicans knew at the time that the alternative to a blue-ribbon commission of the sort that investigated the 9/11 attacks was a partisan committee that would be established by a simple majority vote of House Democrats. That is, in fact, their desired alternative. The GOP’s apparent strategy was to close off every method of independent inquiry so that the one that remained could be denounced as a partisan spectacle. It is, therefore, no surprise that this committee came under attack for its partisan makeup; that was the GOP’s preference.

Ah, the GOP will say, but what about the efforts by the Republican minority in the House to appoint pro-Trump Republicans to the committee? Initially, Minority Leader Kevin McCarthy tried to appoint two members to the committee — Reps. Jim Banks Indiana and Jim Jordan of Ohio — who were summarily rejected by Speaker Nancy Pelosi. That led McCarthy to pull the rest of the conference’s appointees (save conscience-driven members like Reps. Adam Kinzinger of Illinois and Liz Cheney of Wyoming, despite the fatal blow their participation has or likely will deal to their political careers). This brings us to the GOP’s last objection to the committee’s preceding: Everything it uncovered was previously known.

“All. Old. News,” insisted the House Judiciary Committee GOP, which Jordan leads. Unless Jordan was secretly deposing Trump administration officials, whose sworn testimony was presented for the first time to the public on June 9, he likely did not know the extent to which Trump was being regularly disabused of the notion that there was significant election fraud or that the chairman of the Joint Chiefs of Staff was told to cover up the extent to which then-Vice President Mike Pence had simply assumed the powers of the presidency that the president himself had abdicated. And yet, this Clintonian method of dismissing new revelations as somehow dated, marking anyone surprised by them as out-of-touch rubes, is effective. After all, who wants to be thought of as out of the loop?

This tactic has the disadvantage of competing against genuine news. We did not know for certain that, as Cheney said, Donald Trump “placed no call to any element of the United States government to instruct that the Capitol be defended,” making no order to deploy the National Guard or contact federal law enforcement. We did not know that Republican lawmakers sought pre-emptive presidential pardons for their role in the day’s violent events. We did not know that Trump said, according to Cheney’s direct quotes, that Trump reacted to the chants of “hang Mike Pence” by saying, “Maybe our supporters have the right idea” and that Pence “deserves it.” We did not know the number of occasions in which White House Counsel Pat Cipollone threatened to resign along with his team, which Jared Kushner described as “whining.”

Republicans cannot argue with the fact pattern the committee presented to the public, so they’re reduced to table-pounding. That behavior resonates only with those on the right who have already convinced themselves this investigation is a witch hunt. That describes the majority of Republicans, to be sure, but not even an overwhelming one, if polling is to be believed, and it applies to no other American partisan affiliation.

Republicans who continue to oppose an inquiry into that horrible day are reduced to shouting down the inquirers. But there is no decibel level they can achieve sufficient to drown out the truth. The facts speak for themselves.