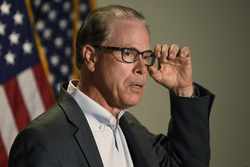 Sen. Mike Braun isn’t happy that Congress left town without reaching a deal on the next COVID-19 relief bill as the nation continues its struggle to contain the virus. He’s even more concerned that Republicans are going to repeat a 2018 election mistake by failing to take on the nation’s soaring health care costs, including sticker shock over wildly uneven coronavirus testing and treatment prices hospitals and insurance companies are charging patients.

The Indiana Republican laments that the Hoosier State has the highest hospital costs in the nation. He said he’s spending his August recess listening to one COVID-19 price-gouging horror story after another – both in Indiana and across the nation.

One Houston family, already dealing with COVID-19-related unemployment, is facing nearly $37,000 in bills after their loved one died from the virus  earlier this year. A Manhattan hospital initially charged one man’s insurance company nearly $1.9 million for the hospital’s 44-day effort to save him from succumbing to COVID-19 until the insurance company objected and got the bill down to $178,200. (The family’s final bill will depend on how much insurance covers.)

Even the costs of diagnostic COVID-19 testing varies widely, from $20 to $850 for each test at large hospitals nationwide, not including the provider visit, facility fee or other services, a recent Kaiser Family Foundation analysis found.

Supply-side economist Art Laffer recently shared his own egregious example. When his son returned home from Barcelona in March with coronavirus symptoms, he went to a Nashville hospital to get tested. He saw four nurses and returned home. His bill that arrived a few weeks later was more than $15,000.

When Congress returns, Braun (pictured above) will hit his colleagues with this litany of nightmare billing scenarios as the latest evidence of why his health care price transparency package should be included in the next COVID-19 relief package or pass as a stand-alone bill before the November election. The measure, which he co-authored with Iowa Republican Sen. Chuck Grassley, would require hospitals to post real cash prices and insurers to disclose privately negotiated reimbursement rates before patients receive testing or treatments.

“There’s this unholy alliance between insurance companies, hospitals, big Pharma and even practitioners,” Braun told RealClearPolitics in an interview. “But consumers are starting to have some skin in the game as we have migrated to high-deductible insurance plans. It’s forced consumers to shop around just like they are trying to save a buck on a loaf of bread.”

Introducing price-transparency and market competition into the health care system would force providers to provide far more consistent prices, Braun and other proponents argue. Patients would no longer tolerate a system in which one facility charges $350, while another just down the road charges $3,500, and the competition would force prices down, they contend. Braun and Grassley point to procedures such as Lasik eye surgery that health insurance plans don’t normally cover. Lasik eye surgery providers advertise their prices, and the costs have shot down remarkably over the last two decades.

Braun also argues that simple price transparency can reduce health care costs by 30% to 50%. He cites his own experience as a business owner who saw a similar level of savings when his company, which employed 300 people, in 2008 moved to a self-insured model and began contracting directly with price-transparent providers.

For uninsured Americans or those with high-deductible plans, the cost savings are critical, but providing price transparency could also help boost the economy, he argues. With so many businesses struggling in the pandemic-induced recession, lowering employers’ health care costs would give them more funds to rebuild and re-hire.

Braun and Grassley introduced the bill back in late June, and it has the support of seven other Republican senators, including several in difficult re-election contests, including Sens. Susan Collins, Thom Tillis, Joni Ernst, David Perdue and Kelly Loeffler.

Recent Republican polling shows the issue should command bipartisan support – especially from lawmakers in battleground states. A July 29 poll conducted by McLaughlin & Associates in Maine, North Carolina, Georgia, Iowa, Colorado, Arizona and Montana found that 88% of those surveyed support requiring all organizations involved in health care to disclose their prices. That figure jumps to 98% among women under the age of 40. Six out of 10 voters also want to see the pricing transparency mandate included in the next coronavirus relief package, with support even higher among Democratic voters, 66% of whom would like to see it included.

In a memo to Republican leaders and GOP activists, pollster John McLaughlin calls the health care price transparency bill “a winning issue for all Americans” and urges lawmakers to pass the measure – either as part of any upcoming COVID-19 relief package or as a stand-alone bill. Health care continues to be a top priority for voters, he wrote, and Republicans need to learn the 2018 lesson on the issue.

“If the election is about health care, you’d better have something you’re for and not just against,” he wrote, referring to GOP efforts to dismantle the Affordable Care Act’s individual mandate.

According to exit polls from the 2018 midterm, health care was the top issue for most voters, he reminded Republicans. Of that group of voters, 75% cast ballots for the Democrat candidate for Congress.

Braun faults Republican fundraising alliances with the U.S. Chamber of Commerce and pharmaceutical and insurance companies for preventing the pricing bill from garnering more GOP senators’ support. Opponents have claimed the pricing transparency mandate would compromise bargaining leverage between insurance companies and other third-party payers and could drive up costs for hospitals and other providers already facing labor demands and other stresses during the coronavirus pandemic.

Braun argues that pricing transparency should be a no-brainer for Democrats who cast themselves as consumer champions. So far, however, it has failed to win over even one Senate Democrat as a co-sponsor. Braun said he has approached several Democratic colleagues who initially expressed interest but then later begged off, citing Senate Minority Leader Chuck Schumer’s opposition.

Late last year Schumer worked behind the scenes to defeat a different, unexpected billing measure involving  rates for out-of-network care from being included an end-of-the-year spending bill. The Washington Post reported it was widely believed that Schumer was acting on behalf of powerful New York hospital groups, which have donated millions to the Senate Majority PAC, a super PAC closely aligned with Schumer that helps elect Senate Democrats.

At the time, Schumer denied the donations had anything to do with his decision to work to prevent the bill, which negotiators had been crafting since the spring, from becoming law.

The Greater New York Hospital Association, or GNYHA, which represents the interests of Empire State hospitals, issued a statement shortly before the surprise billing language was dropped from the spending bill, arguing that it included a “needless provision that would that benefit for-profit insurers while severely harming hospitals and physicians.” Two days before the minority leader intervened, GNYHA reportedly met with a Schumer aide in his Washington office.

The GNYHA had given the Senate Majority PAC $6 million this election cycle, according to opensecrets.org.

The American Hospital Association then filed suit to overturn the regulations. It lost its first legal battle in June when a federal judge upheld the policy, but the group is now appealing. Passing the Braun-Grassley bill would cement the price transparency requirements into federal law and make it far more difficult to challenge them in court.

Trump celebrated the June court win as a “big victory for patients.”

“Federal court UPHOLDS hospital price transparency,” he tweeted in late June. “Patients deserve to know the price of care BEFORE they enter the hospital. Because of my action, they will. This may very well be bigger than healthcare itself. Congratulations America!”