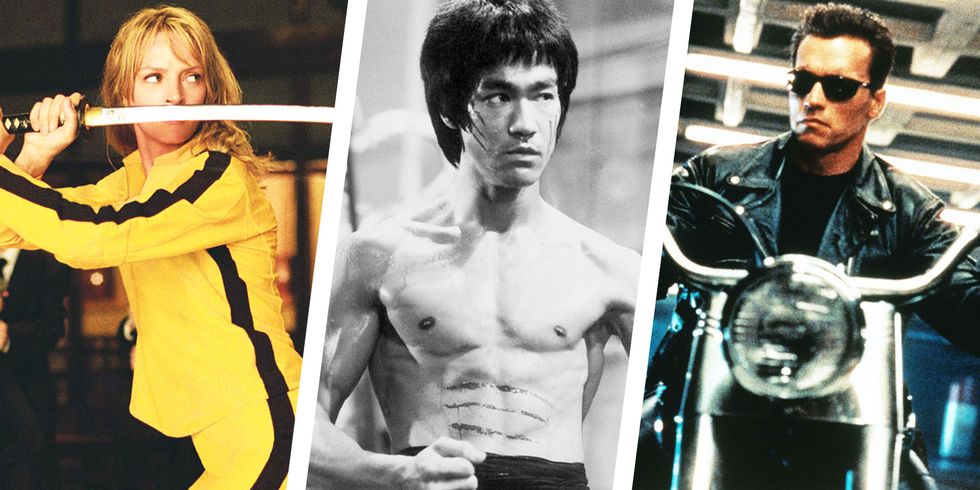 These Are the 27 Best Action Movies Ever Made

These Are the 27 Best Action Movies Ever Made

As long as there are movies, there will be action movies. Why? Because no young girl or boy grows up pretending to be a damsel in distress or a sidekick. They all want to punch, draw swords, and run toward the danger. They are the heroes and the future directors, choreographers, and performers who bring these imaginations to life.

And to the incredulity of your father (who insists no movie will ever top First Blood) the action genre hasn’t slipped on it’s roundhouse kick. If anything, we are now experiencing another golden age of ass-kicking cinema. While there are obvious developments in VFX technology, which have allowed for larger set pieces and more realistic thrills, much of what makes a great acton film a great action film hasn’t changed: painstaking choreography, fearless stunt performers/actors, and clear cinematography (and not that Taken fence jumping bullshit.)

The only thing that’s changed are the names and faces. Legend action directors like Ang Lee, John Woo, Robert Clouse, and Zhang Yimou (still going strong) have given way to newer arrivals like Gareth Evans, Chad Stahelski, and Christopher Nolan. And performers like Bruce Lee, Jean-Claude Van Damme, and Arnold have changed to Tony Jaa, Iko Uwais, and Charlize Theron.

If anything, the fights are becoming more brutal, more carefully choreographed, and more ambitious. And international actors and directors are finally getting increased attention (and direction) in a Hollywood overly-saturated with slapstick cinematography and post-production punches.

Here’s hoping for more John Wicks, more Raids, and more Atomic Blondes in the future. Until then, here is, in no particular order, the 27 best action movies ever made.

John Rambo would become increasingly cartoonish as the sequels went on, but in the original, he was just a scared veteran trying to survive out in the real world.

The Raid was more frenzied, but the sequel (also written and directed by Gareth Evans) got grand, introducing an intricate crime-drama plot. Didn’t matter: Redemption is brilliantly violent, a ballet of broken bones, perfect punches and crazy car chases.

The film marked the breakout moment for Muy Thai martial artist Tony Jaa and the beginning of one of the best action franchises ever. There’s not a lot of fakery in Jaa’s fight scenes. Dudes are getting punched for real.

The second film is more dialogue-heavy, but the first half is essentially nonstop action … and it’s a good thing the Crazy 88 fight is in black and white, because it’d almost be too bloody to watch otherwise.

What should have been Jason Bourne’s final adventure is a thrilling, satisfying conclusion to this kinetic trilogy. Director Paul Greengrass and star Matt Damon permanently reshaped how we think of the globetrotting espionage thriller. James Bond is still playing catch-up.

You can’t go wrong with any in this series – though it has only gotten better as the years have gone along – but the introduction of Rebecca Ferguson to this series just amped up the emotional stakes.

Keanu Reeves’ first of two masterful franchises on this list, John Wick gave us a mournful 21st-century assassin who won’t let his grief get in the way of shooting every bad guy in the head at point-blank range.

Bruce Lee was popular before this film, but this is what sent him into the stratosphere. Well-made from start to finish, and absolutely unrelenting. The best part about it is that there isn’t a gun to be found in the whole film.

Ong-Bak gave us Tony Jaa and Muy Thai, and Ip Man gave us Donnie Yen and Wing Chun. While Yen had been in many other great action films previously (check out Kill Zone — S.P.L.), its the Ip Man films that will define his legacy, the character forever his—the semi-biographical person of Ip Man, Bruce Lee’s trainer. Though the films can feel a bit jingoistic at times (they’re basically Hong Kong’s Rambo), the fight scenes are femur-breaking legendary.

Zhang Yimou’s magnum opus, Daggers is maybe more love story than a martial arts film—and so the most action-packed love story of all time—but “love story” is no cinematic pejorative. The film features the most colorful and vibrant cinematography of any film on this list. Action is a visual genre. And no film here is more pleasing to the eyes.

John Woo’s Hollywood career wasn’t as sparkling or consistent as fans would have hoped, but this late-‘80s peak remains a glorious salute to melodramatic plotting and poetic shootouts. Chow Yun-fat made for a fierce, soulful assassin — and, never forget, The Killer is where Woo began his obsession with dove-filled action scenes, which have been parodied everywhere from 21 Jump Street to Scary Movie 2.

Oh, don’t dare not think of this as an action movie. The existential dread of Ridley Scott’s original is replaced by James Cameron’s trademark intensity, and even though this has aliens and spaceship, this is as concentrated a dose of thriller mania as you will find. You’re gripping your chair just thinking about it, aren’t you?

George Miller had been mulling a new Mad Max film for years, and clearly, he spent that time coming up with every possible permutation of a chase sequence. This movie remains thrilling, almost insane, four years later.

Because of Ang Lee’s prestige and the glamorous international cast, there is sometimes a sense that this film is bland, good-for-you Important Filmmaking. But watch it again today. This movie is iconic for a reason: it’s a blast, and a euphoric ride.

If the first installment was more of a gritty thriller, then T2 is where director James Cameron cranked up the action spectacle. (That’s the kind of thing that happens when you have a much bigger budget.) Harnessing the power of then-new CG technology, this sequel threw down a challenge at the start of the ‘90s that other blockbuster filmmakers struggled to answer.

Men in Black is that perfect mix of boot-chasing, gun-firing acton with so much outer-wordly originality, Hollywood is still trying to suck every last ounce of life-force out of the 1997 original. Can we just leave the classics alone?

Yes, the car chases are as amazing as you’ve heard, but what’s striking today is how well this holds up as a cop procedural. Steve McQueen was an incredible movie star, and he was never better than he was here.

Popeye Doyle is the perfect action star for the ‘70s: grizzled, cranky, morally compromised, not the least bit likable, but absolutely tenacious about getting the bad guy, even if it’s for reasons he can’t even necessarily comprehend. Gene Hackman was at the absolute peak of his powers at this point.

Hollywood remade Akira Kurosawa’s masterpiece as The Magnificent Seven. It couldn’t compare: Not only is Seven Samurai an epic of scope and scale, it’s one of the most emotionally nuanced of action movies, featuring a slew of characters you come to care deeply about.

Michael Mann’s epic is the culmination of everything he’d been working toward his entire career; the years since still feel like his own response to it. Everybody remembers the diner scene, but the bank heist sequence feels like a magic trick even more today.

The Wachowskis dreamed up an incredible sci-fi dystopia and then cast Keanu Reeves to play an everyman who discovers he’s the chosen one who must free humanity from the tyranny of machines. The Matrix should not have worked, but from bullet-time technology to the film’s trench-coat aesthetic, it became an epoch of pre-millennium action filmmaking.

John McClane just wants to reconnect with his estranged wife. Instead, the poor guy has to fight a bunch of terrorists, led by a fiendishly endearing Alan Rickman. Die Hard made Bruce Willis America’s most likeable action hero. And, yes, this is a Christmas movie.

We can’t have a best action list and not include a James Bond film. While classicists may want to go into the archive, we think the rebranding of the franchise (the grittier, stockier Daniel Craig Bond)—while maybe a bit too sad and not always as fun — still has some of the best action of the franchise. The opening chase scene features one of the best freerunning scenes put to cinema (okay, maybe District B13 takes that) and includes legendary freerunner Sébastian Focuan. That’s enough for us.

We’d be remiss not to include some South Korean cinema on this list. Recent movies like The Man from Nowhere, I Saw the Devil, and the South Korean-American collaboration Snowpiercer bring much-needed life to action genre tropes. But Oldboy is a hammer-smashing Oedipus complex classic all its own—and one that’s influenced action cinema ever since (the hammer from Drive, the hallway fight from Netflix’s Daredevil, the list goes on).

Spike Lee’s cat and mouse crime thriller is just about as unique a take on the heist genre as you can get—an impressive feat given how glutted the genre still is. Watching it now might feel predictable, but that’s only because you’ve seen this story imitated so many times since. Maybe not Lee’s best-known film (though it remains quite popular), but it’s one of the best of the genre.

Not just the best superhero movie, The Dark Knight might also be the most quotable: “Why so serious?” “You either die a hero, or you live long enough to see yourself become the villain.” Plus, a fleet of memorable action sequences and the greatest villain performance ever. The MCU still hasn’t come close to matching this.

A throwback to old action serials, Raiders of the Lost Ark is cheeky but also utterly electric. The movie is perfectly constructed and rarely takes a breath. And in Indiana Jones, Harrison Ford gave ‘80s kids their signature hero—even if he’s not so fond of snakes.

Will Leitch
Will Leitch is a national correspondent for the MLB and contributing editor at New York Magazine.