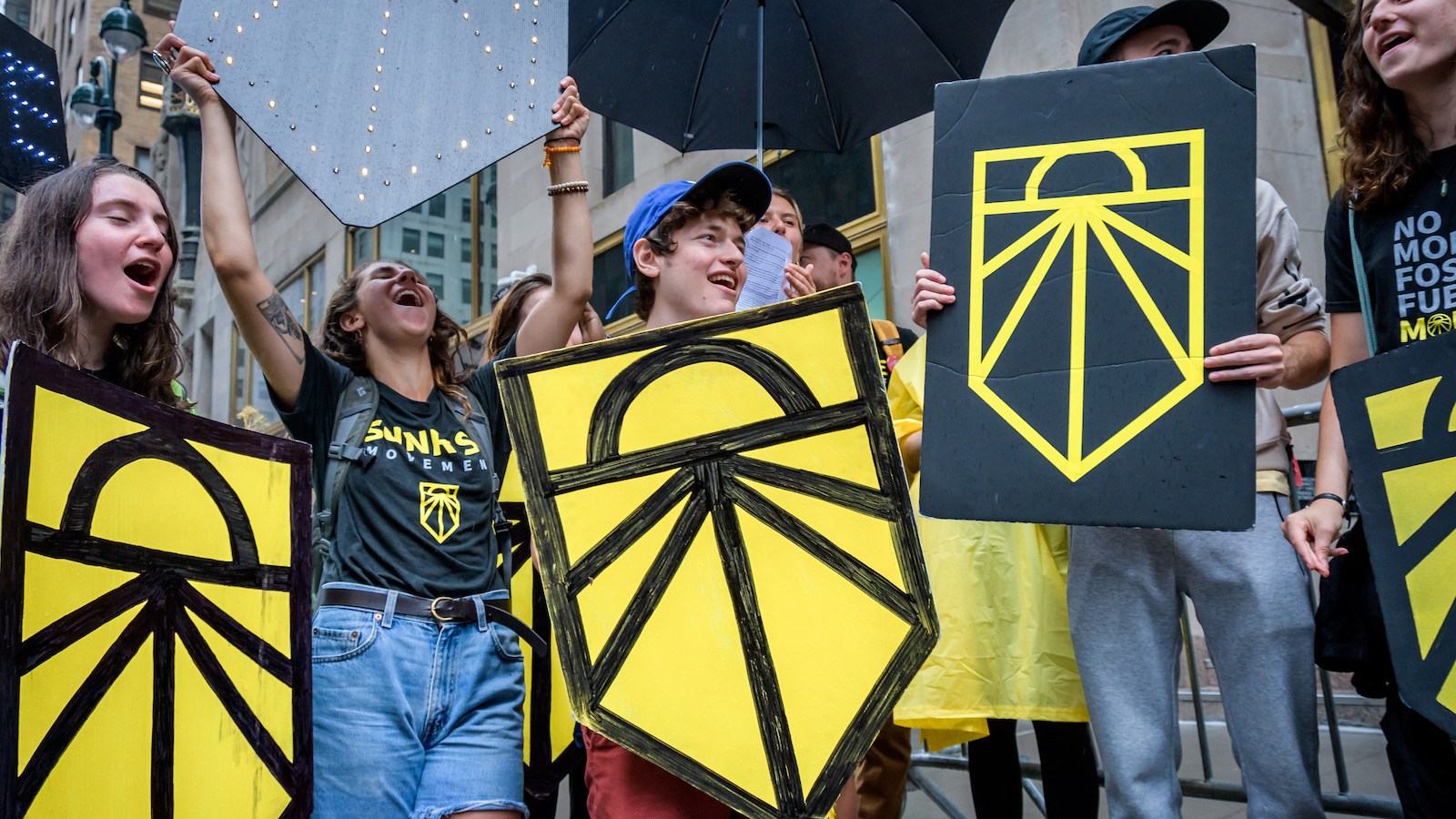 ‘We don’t have any choice’: The young climate activists naming and shaming politicians

‘We don’t have any choice’: The young climate activists naming and shaming politicians

It was a Saturday night in September when 160 or so middle and high school students logged on to a Zoom call about how to confront American politicians using tactics inspired by young civil rights activists fighting for the abolition of slavery.

The teenagers were online with the Sunrise Movement, a nationwide youth-led climate justice collective, to learn about organizing Wide Awake actions — noisy night-time protests — to force lawmakers accused of ignoring the climate emergency and racial injustice to listen to their demands.

It’s a civil disobedience tactic devised by the Wide Awakes — a radical youth abolitionist organization who confronted anti-abolitionists at night by banging pots and pans outside their homes in the run-up to the Civil War.

Now, in the run-up to one of the most momentous elections in modern history, a new generation of young Americans who say they are tired of asking nicely and being ignored, are naming and shaming U.S. politicians in an effort to get their concerns about the planet, police brutality, inequalities, and immigration heard.

The first one targeted the Kentucky senator Mitch McConnell after details emerged about the police killing of Breonna Taylor. In the days following the death of Justice Ruth Bader Ginsburg, Sunrise activists woke up key Republican senators, including McConnell and Lindsey Graham, demanding that they delay the vote on Trump’s Supreme Court nominee until a new president is sworn in.

“Even though we can’t vote, we can show up on the streets and wake up politicians. It’s our future on the line, not theirs,” said 17-year-old Abby DiNardo, a senior from Delaware County. The high school senior recently coordinated a Wide Awake action outside the home of the Republican senator Pat Toomey, a former Wall Street banker who has repeatedly voted against climate action measures.

The Sunrise Movement was founded by a small group of disparate young activists in 2017 and initially focused on helping elect proponents of clean energy in the 2018 midterms.

It has since evolved into an influential youth-led political movement, with more than 400 hubs nationwide that use rallies, sit-ins and old-fashioned voter outreach to help elect local, state and national candidates who back key progressive issues such as the Green New Deal and police and immigration reform.

“Zero emissions by 2050 isn’t fast enough,” said Maddy King, 13. “Climate change is already happening, it’s not a theory. If I do my part, I hope others will be empowered to fight for future generations too.”

Amid a mounting sense of urgency fueled by Black Lives Matter protests, wildfires, and COVID-19, the movement has become notably younger.

Solei Yoder Salim, a sophomore from Lancaster, last month co-founded a high school hub which already has 40 or so active members from across the county. Lancaster is a diverse progressive city surrounded by rural conservative neighborhoods including large Mennonite and Amish communities.

“The Green New Deal is worth fighting for, it’s important for the world and our country. I like coming together with my community and other high schools, it’s important but also fun,” Salim said.

Salim cannot vote, but more than 15 million Americans have turned 18 since the last general election, and the majority appear to want Trump out of the White House.

Biden holds a 33-point lead over Trump among 18- to 29-year-olds who plan to vote, according to a Harvard Institute of Politics poll last month.

While less than a third of young Biden voters said they were very enthusiastic about casting a ballot for the 77-year-old former vice president, voter turnout among the under-30s could be key: Sixty-three percent of respondents said they will “definitely be voting,” compared to just 47 percent in the same poll four years ago.

Troy Turner, 29, Sunrise’s electoral coordinator for Pennsylvania, said: “Biden is super unappealing to young people, he represents the old guard of politics favoring style over substance. Young people are policy voters, but we have to vote for Biden as he represents potential for a livable future. Trump represents the apocalypse.”

The movement’s endorsements for Congress include Alexandria Ocasio-Cortez; Qasim Rashid, a Muslim anti-violence advocate and environmental justice campaigner; and Marquita Bradshaw in Tennessee.

But they are mostly supporting local candidates like the anti-fracking advocate Danielle Friel Otten in Chester County, who is up for reelection to the state house.

DiNardo, who is holed up with a handful of colleagues from the Down Ballot Disruption project in a rented house in North Carolina, coaches juniors and seniors on how to do banner drops, town halls, and phone banking to help turn out voters for endorsed candidates in 33 states.

“A lot of these down-ballot races can be decided by just hundreds of votes and most people don’t pay attention, but we can’t win a Green New Deal without these candidates. A lot of young people don’t love Biden, but it’s not just about the presidency,” she said.

Voter turnout is crucial, but it may not be enough. Trump and his allies have refused to commit to a peaceful transition of power while making wild, unsubstantiated claims about widespread voter fraud.

Abby Leedy, 19, a full-time organizer from Philadelphia, is training young hub leaders on how to mobilize large numbers of protesters in case Trump tries to steal the election.

“We need to to be ready if Trump tries to pull off a coup by mobilizing his supporters, especially white supremacist groups, to come to places like Philadelphia and do God-knows-what. We’re preparing people, but if his supporters start shooting or drive into the crowd there could be a massacre. This keeps me awake at night, but we really don’t have any choice.”