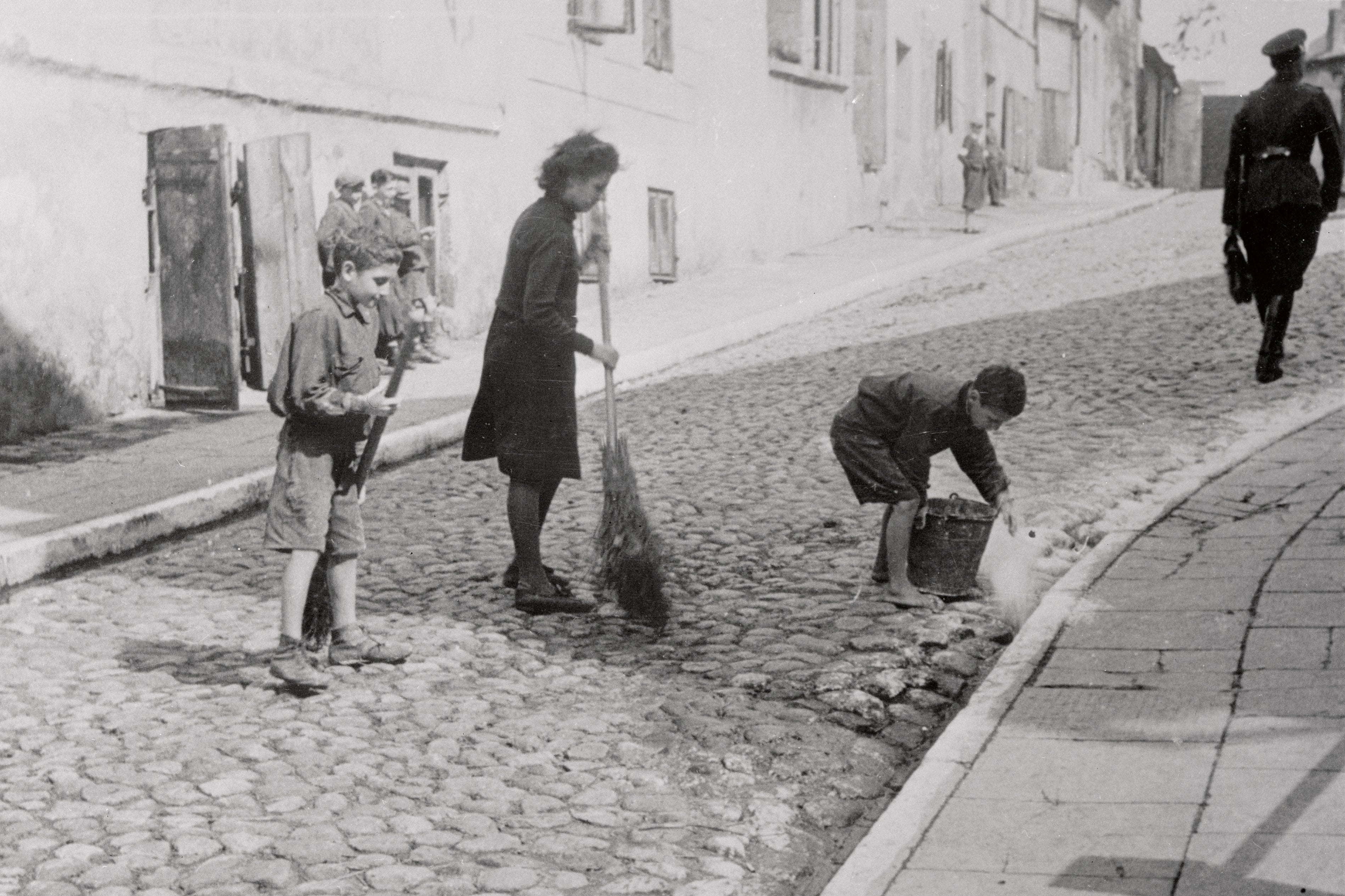 632
SHARES
1.4k
VIEWS
Share on TwitterShare on Facebook
a sophisticated mathematical analysis that shows how personal hygiene, quarantines, social distancing and a grass-roots public education campaign appeared to extinguish a raging typhus epidemic in the Warsaw Ghetto in 1941. The incident stands out because these well-recognized health-preserving measures were promulgated successfully, even as the Nazis attempted to use starvation and typhus to wipe out 450,000 people packed into an area the size of New York City’s Central Park—five to 10 times the density of any city in today’s world.

The researchers say some of the lessons from typhus in the Warsaw Ghetto may carry over to COVID-19. “At a basic level, we learn how communities can use simple public health measures designed to beat infectious diseases,” says Lewi Stone, the study’s lead author. “Education, hygiene, motivation and cooperation are incredibly important in trying to beat the pandemic.”

Stone is a mathematical biologist at RMIT University in Australia and Tel Aviv University. And he is part of a community of researchers who simulate epidemiological events using sophisticated mathematical models to study modern outbreaks the plague, influenza and early-childhood diseases. These specialists have now trained an obsessive focus on COVID-19.

Previous work by Stone also explored historical themes. He used data based on railway records, for example, to examine the pace at which the Nazis transported and killed almost the entire Polish Jewish population.

Stone began this latest project three years ago, after he came upon a study that mentioned the World War II–era impact of the lice-borne bacterial illness typhus—a disease that took on a leading role during the Holocaust. The Science Advances paper explains that “the German discourse on hygiene was very much influenced by the anti-Semitic idea of Jews being notorious bearers of diseases. In the Nazis’ ideology, this evolved into Jews being the actual disease, so epidemics were to be naturally expected and dealt with, which in the end meant annihilating the Jews.”

When Stone started exploring the data that he found about typhus in the Warsaw Ghetto, he discovered that underreported official case and death statistics from the area diverged widely from epidemiologists’ records. It took time to reconcile the conflicting information. Details of Jews’ health in the ghetto from the end of 1940 to mid-1942 were intriguing but unclear. In an early analysis, Stone had been surprised that the epidemic had expired at the beginning of the winter of 1941–1942. Winter is when a contagious disease outbreak usually gets worse. For a year afterward, he thought the data might have been corrupted.

Stone recruited a multidisciplinary team of researchers: theoretical ecologist Yael Artzy-Randup of the University of Amsterdam, statistical modeler Daihai He of Hong Kong Polytechnic University and historian Stephan Lehnstaedt of Touro College Berlin. The group used a classical model for disease outbreaks that traces the up-and-down curves of cases. The model typically assumes a pathogen’s transmission rate through a population remains stable. But initially, the results it produced for the team’s study were highly implausible: the model estimated that three quarters of the 450,000 inmates were infected with the typhus bacterium, a number far higher than previous figures supplied by epidemiologists.

The classical model could only accommodate the data and produce a reasonable estimate of what happened when the transmission rate was allowed to vary over the course of the epidemic, permitting the scenario of a rapid decrease in the number of new cases. “To fit the data in a reasonable fashion, the transmissibility had to drop before the epidemic crashed,” Stone says. “And this is the tell-tale signature of public health interventions impacting the disease transmission and leading to its decline.” When the rate could vary, it elicited a far more plausible average estimate of 72,000 cases, along with a maximum estimate of 113,000. This result corresponded to the key historical reports.

The epidemic diminished rapidly before the winter of 1941–1942, a time when the number of new cases would be expected to grow faster. The historical record provided some clues as to what may have happened, based on a wide-ranging public health intervention. Residents’ medical organizations and citizen self-help networks within the Warsaw Ghetto taught health education courses, and the lectures sometimes attracted more than 900 people. An underground university taught medical students. Scientific research on starvation and epidemics was even carried out.

The model Stone and his team used for the epidemic’s trajectory indicated that without steps to fight the disease, the number of people infected would have been two to three times greater. Another factor that could have eased the number of infections—one only implied by the researchers’ analysis—was a policy change by the Nazi administration to turn a blind eye on the smuggling of food into the ghetto in order to keep the residents strong enough to work for their incarcerators. It was estimated that for many of the workers, rations of less than 200 calories a day were elevated to about 780 calories, and this increase came largely from smuggled food.

The unreliability of official statistics also left many deaths from typhus, starvation and other causes unrecorded. Estimates ranged as high as 5,000 to 9,000 deaths per month at the outbreak’s peak, when corpses were being deposited on the ghetto’s streets. As an alternative means of counting deaths, Stone used what he calls the “maths of food ration cards.” A drop of 118,000 cards on the rolls from March 1941 to July 1942 provided an estimate of a comparable loss of ghetto residents during that period, though Stone is continuing to research this statistic’s validity.

David J. D. Earn, an applied mathematician at McMaster University, who was not involved with the new study, says it is “a fascinating example of how modern mathematical and statistical methods can be used to identify likely mechanisms of disease spread and the effects of control measures. The inference that disease control efforts probably greatly reduced the magnitude of the typhus epidemic in the ghetto is illuminating, to say the least.”

Nina H. Fefferman, a mathematical epidemiologist and professor at the University of Tennessee, Knoxville, who was also not part of the study, raises questions about whether causes other than the public health measures might have contributed to the sudden decline in typhus cases. Did changes in mourning and burial practices lead to less contagion? Did improving nutrition help aid the decline?

Still, Fefferman calls the new research “wonderful.” This study, she says, “constructs a compelling case for the previously unacknowledged critical role good public health leadership and individual behavioral interventions may have played in the success a severely afflicted population had in curtailing and surviving the epidemic.”

The study makes a connection between the ghetto outbreak and the current pandemic. COVID-19 is more contagious but less deadly than typhus, which could kill more than 20 percent of those infected. Stone says the intersection of health and politics may have some parallels with the crisis today. “These same themes reappear,” he says, “only in an updated form for the 21st century, with the way minority groups are treated—and are, in fact, the true victims in COVID-19 days.”

Ultimately, the Warsaw Ghetto residents’ efforts gave survivors the briefest respite before the majority left were transported beginning in mid-1942, to the Treblinka death camp in occupied Poland. But the public health lessons of those efforts left a legacy that persists today. “The story of a community in these conditions,” Fefferman says, “under threat from both man and disease, still coming together to make and adhere to policies to help better their chances of all surviving together is exactly the sort of understanding and hope we need as we continue to shape our local, regional, national, and global response to COVID-19.”

Read more about the coronavirus outbreak from Scientific American here. And read coverage from our international network of magazines here.

Gary Stix is a senior editor at Scientific American. He writes the blog Talking Back at ScientificAmerican.com.