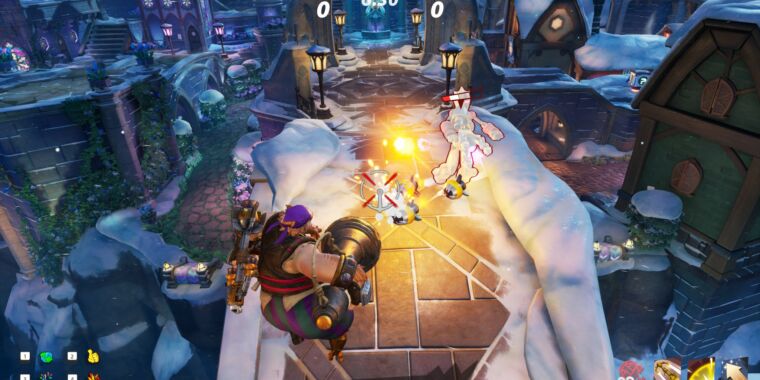 Roughly 20 years ago, online-only video games became a significant force in retail. You could expect boxed games, ranging from $30-60, to revolve entirely around things like versus-deathmatch arenas or MMO quests. That, obviously, has changed on modern PCs and consoles.

But what happens when a game publisher in 2020 tries to go back in time and charge $30 for one of these things? Can a paid, online-only game work in the modern, free-to-play marketplace?

We don’t get a conclusive answer from Rocket Arena, which EA released last week on PC, PS4, and Xbox One for $30. There may very well be a brand-new game in this era that’s up to the task, but this one is more of a cautionary tale.

Which Rocket Arena? Did you mean Rocket League?

Because this is Ars Technica, we must start by differentiating this new game’s name from the popular, long-running mod of the same name. “Rocket Arena” is also the name of a fun 1v1 tweak for games like Quake III Arena that gives two players every possible weapon at the start of a match, then places them in a high-speed duel. Apparently, that mod’s name was never trademarked, and this new game’s developers at Final Strike Games swooped in to nab it in 2017.

From here on out, any italicized mention of Rocket Arena refers to the new 2020 game. And, yes, before hitting “publish,” I had to make sure I didn’t accidentally type Rocket League, the name of a wildly successful 3v3 car-soccer game.

EA’s new game, admittedly, leans more into the title as a concept, because it revolves almost entirely around rocket launchers as weapons. Pick from 10 combatants, each with their own specialized rocket launcher as a primary weapon, and jump into 3v3 online battles. There’s zero offline mode to speak of beyond a simplistic practice mode; if you want to fight the game’s AI, there’s an online option, tucked into a few menus.

Things begin awkwardly thanks to the tutorial’s focus on “rocket jumping.” For the uninitiated, classic Quake games revolve around the idea of blasting yourself to a higher jump by launching a rocket at your feet. This high-speed maneuver comes with a damage tradeoff: jump farther, take blast damage. In Rocket Arena, nobody can hurt themselves, and this fact, coupled with the tutorial’s insistence that you learn the move to climb up walls, might make you think the whole game is a blast-to-jump movement frenzy.

Trouble is, the EA game’s versus arenas are mostly open-air battlegrounds with floating platforms, not corridor-lined Quake maps of old; there’s rarely an organic wall or corner to bounce yourself off of for any strategic reason. Worse, you might hope that a rocket jump would offer a useful speed boost across these maps, since the game’s modes emphasize movement (which I’ll get to). But these bounces offer the same speed as the built-in “triple jump” mechanic. So… why all that emphasis on rocket jumping?

Before the game tries to answer that question, however, Rocket Arena slaps you across the face with an interface that looks straight out of Fortnite. Buy new outfits! Buy a battle pass! Buy decorations for your “totem,” a flag that briefly appears between matches. The ways Rocket Arena nudges you to spend real-world money, after you’ve already paid $30 to start the game, would be hilarious if they didn’t feel like a slap in consumers’ faces.

Had the UI been redesigned to reflect how the in-game economy works, EA might have left a different impression. A first-time player can rack up a ton of in-game currency by simply playing one match with each of the 10 characters, which can be spent on certain cosmetic unlocks. What’s more, a majority of the launch game’s cosmetic options can only be earned via gameplay. And once you’re in the game, all of the modes are available; no gameplay is gated behind further payments.

Maybe, just maybe, EA should have removed all ties to real-world money in its “launch” period, thus forcing players to explore how the natural act of playing the game leads to new outfits and decorations… before trying to squeeze us all for a few more bucks.

Let’s say EA somehow straightened its messaging about money and respected players. Is there a game worth recommending here? Almost.

Rocket Arena offers a few versus modes, all broken down to 3v3 faceoffs. Two of these modes offer traditional versions of team deathmatch and king-of-the-hill; two offer slightly unusual spins on capture-the-flag and zone control; and the last one is a “horde” mode against waves of AI baddies. (Without any adjustable difficulty or other options for RA‘s horde mode, however, I cannot recommend it.)

The trouble begins with a cast of 10 characters who are clearly not designed to shine in every mode. One example is Plink, the preteen wiz-kid who can absolutely lay waste to foes thanks to his default barrage of mini-rockets that kinda-sorta home in on targets. Should you need to move the “rocketball” (this game’s version of a flag) from one side of an arena to another, he’s not up to snuff, as his “teleport” ability isn’t a movement-tech option. But he’s an imbalanced damage machine who can instantly turn the tide in a round of team deathmatch. Worthless in some modes; imperative in others.

A good “hero shooter” works when its range of classes encourage teamwork and coordination, and thus make any team framework viable in any mode. But Rocket Arena‘s mechanics revolve around doing damage and picking up temporary items scattered across the map (speed boosts, throwable bombs), not setting up things like buffs or zone-control augmentations. Out of the 10 combatants, only two have the ability to conjure “shields” of any kind, and only one of these shields benefits teammates by slowing down enemies’ attacks in a certain zone. (Rocket Arena buries this issue, in part, by not letting players tap a single button to review character abilities before or during a match.)

At launch, I’ve only had success with characters who pile on the damage, like Plink and the doesn’t-have-to-reload pirate Blastbeard, and the super-fast character Rev for the sake of objective-based modes. I’ve had zero fun experimenting with less capable damage-dealing options.