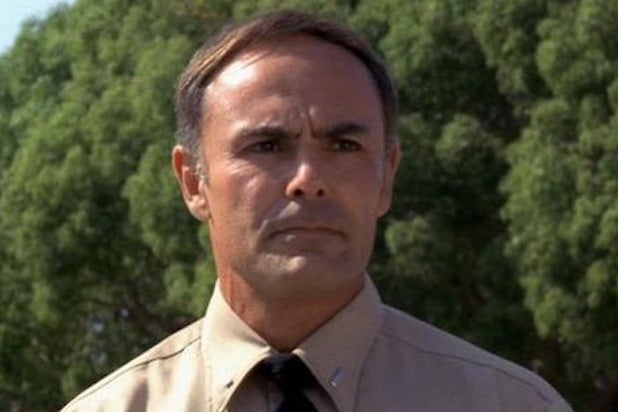 Actor John Saxon, who starred in three “Nightmare on Elm Street” movies for the late Wes Craven, died Saturday of pneumonia in Murfreesboro, Tennessee, his wife, Gloria, told The Hollywood Reporter. Saxon was 83.

Saxon is also known for play the role of the degenerate gambler, Roper, in the 1973 Bruce Lee classic “Enter the Dragon” for Warner Bros. The film centered on a martial arts tournament that took place on an island owned by the villainous Mr. Han.

Saxon was discovered by talent agent Henry Willson, who also discovered and launched the careers of Rock Hudson and Tab Hunter, and was portrayed by Jim Parsons in the Netflix miniseries “Hollywood.” Saxon’s breakout performance was as a disturbed high school football star in 1956’s “The Unguarded Moment” and is billed in the film’s credits as “the exciting new personality John Saxon.”

Throughout his career, Saxon would portray characters of various ethnicities, including a Puerto Rican New Yorker in 1959’s “Cry Tough” and as a Mexican bandit opposite Marlon Brando in 1966’s “The Appaloosa,” a role for which Saxon won a Golden Globe. More than a decade later he played Middle Eastern tycoon Rashid Ahmed on ABC’s “Dynasty.”

Post “Enter the Dragon,” Saxon played a police chief in 1974’s Canadian cult classic “Black Christmas.” He then went on to star in the first and third films of the “Nightmare on Elm Street” franchise, playing Officer Donald Thompson, who is killed by Freddy Kruger. Saxon returned in 1994’s “Wes Craven’s New Nightmare.”

Saxon was born Carmine Orrico on Aug. 5, 1936, the eldest of three children of an Italian immigrant house painter in Brooklyn. He was married three times, first to screenwriter Mary Ann Murphy, then to actress Elizabeth Saxon, and lastly to Gloria Martel, whom he remained loyal to till his death.

He is survived by his sons Antonio and Lance; grandson Mitchell; great-grandson John; and sister Dolores.

A look at the stars in movies, TV, music, sports and media we lost this year