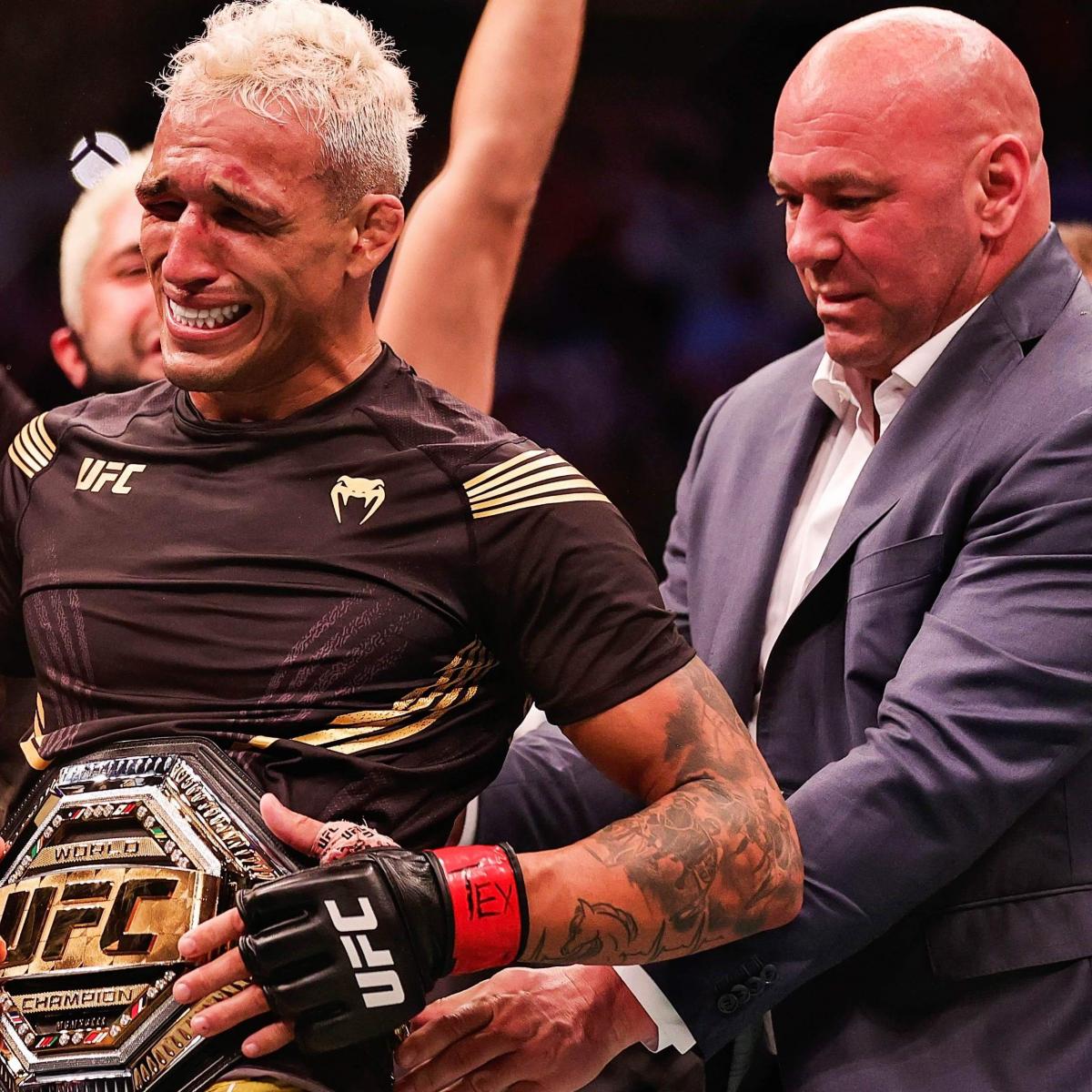 Was it the moment he became the new champion, or was it a few minutes later when he cradled the belt like it was a Cabbage Patch Kid? Was it when he absorbed a barrage of his opponent’s fearsome strikes, or when he dished out some of his own? Was it the heat-seeking left hand at the beginning of the end, the flying leap out of the cage once the end was complete, or the tears that flowed as the belt went around his waist?

There was at least one moment in this fight that made every MMA fan stand up and take notice—finally—of Charles Oliveira.

Oliveira (31-8-1) quietly became the UFC’s all-time submissions leader over an 11-year UFC career that began before he could legally drink a beer in the United States. But he was always viewed as too inconsistent, too one-dimensional to reach the sport’s upper echelon.

But Oliveira switched that and a few other stories Saturday, using mental toughness and an unsung striking game to surprise Chandler (22-6) and the Houston crowd at the main event of UFC 262. The win awarded him the vacant UFC lightweight championship.

“I wanted to come here and show that I was the best in this category,” the Brazilian told broadcaster Joe Rogan through an interpreter after the fight. “I told you I was going to knock him out, and I came and knocked him out. I proved to everybody [that] I’m the lion of lions.”

Oliveira nearly got finished in the first.

Then he stopped Chandler with strikes moments into the second.

MMA is just always so insane.

Oliveira was one of the few who foresaw such an outcome. The vast majority of his supporters surely believed he would win by submission, which, you know, not unreasonable. Anyone who envisioned a knockout was likely backing Chandler, the three-time Bellator champ with 10 KOs in his MMA career, including a first-round destruction of Dan Hooker in his UFC debut five months ago.

In the opening stanza, it looked for a while like it would go that way again. After exploding out of a dicey Oliveira body triangle in the first half of the round, Chandler landed a huge punch that sent Oliveira low and looking for the takedown. Chandler fended him off and punched him repeatedly at the side of the head. A stoppage looked close, but Oliveira did just enough to “intelligently defend himself,” the official threshold for a referee intervention. Chandler won the round on any rational scorecard, but it could have been worse for Oliveira, who found a way to ride through the storm.

“Michael said I couldn’t take pressure, and he hit, hit, hit,” Oliveira said after the fight. “And I’m still here.”

In the second round, Oliveira needed only 19 seconds to turn the tables for good. A huge left hand landed and clearly wobbled Chandler. Smelling blood, Oliveira displayed an impressive nose for the finish when he pounced on Chandler with strikes, refusing to give him any breathing room. To paraphrase Ron Burgundy, it escalated quickly. The referee was on top of the action and soon intervened. Oliveira immediately ran to and flipped over the cage wall and onto the broadcast table, where he cheesed it up for a second with Rogan and commentator Daniel Cormier before gleefully heading into the crowd. Get the insurance people on the phone.

After UFC president Dana White wrapped the belt around the emotional Oliveira’s waist, Chandler was magnanimous toward the new champ before pledging to capture the belt within the next 12 months.

“I think we saw one of the toughest dudes on the planet come back from some adversity,” Chandler told Rogan. “Charles Oliveira is the real deal and I take nothing away from him.”

One of the toughest dudes on the planet? Take a look at Oliveira’s hit list over the past two years and decide for yourself: David Teymur (8-2), Nik Lentz (30-12-2 1 NC), Jared Gordon (17-4), Kevin Lee (18-6), Tony Ferguson (25-5) and now Chandler. You can’t look at those names and records and conclude that Oliveira walked an easy path to get to this point.

What’s next for Oliveira? You know good and well what’s next. Dustin Poirier (27-6 1 NC) and a mid-career Irish fighter by the name of Conor McGregor (22-5) square off in July. The winner of that contest will immediately be slotted in for a title bout with Oliveira. That will put Oliveira at the very top of the sport, which at the moment looks to be what he deserves. (Shocker: McGregor tried to start something on social media immediately afterward, but the new champ, at least ostensibly, wasn’t having it.)

Congrats to Olivera on becoming the 11th UFC lightweight champion.
Wonder who Twelve is…

Oliveira regarding McGregor’s tweet: “Conor, worry about Dustin, afterwards, we’ll talk about it”

In the meantime, let’s check those “best lightweight ever?” debates at the door. As long as Khabib Nurmgomedov (29-0) was a thing that happened, that debate is closed. But as he checks in at the champion’s table—at the still-frisky age of 31—Oliveira looks to have as high a ceiling as any of them, especially now that they, and we, all know his name.