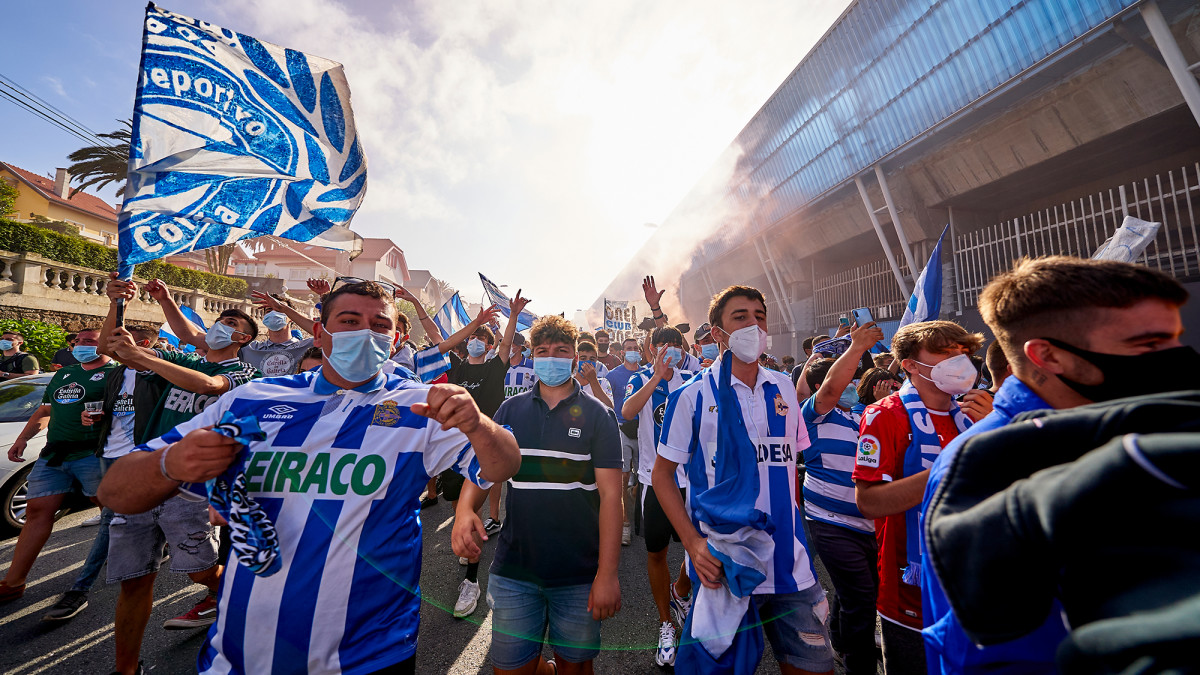 MADRID (AP) — After a small outbreak of coronavirus cases threw Spain’s second division into chaos, it could be up to the courts to decide who gets promoted or relegated.

Deportivo La Coruña was demoted to the third division on Monday even though it couldn’t play its final-round match against Fuenlabrada because some Fuenlabrada players tested positive for COVID-19 just hours before the match.

Deportivo, the 2000 Spanish league champion and a two-time Copa del Rey winner, is threatening legal action to try to stay in the second tier.

“It was a mistake,” Deportivo president Fernando Vidal said. “It was a complete adulteration of the competition because in the last two rounds every significant match has to be played at the same time. What happened was very serious. We will do whatever is needed. I don’t consider the club has been relegated.”

Deportivo – and several other clubs – wanted all matches to be postponed but the Spanish league, along with the Spanish soccer federation and the nation’s sports council, decided to suspend only the match affected by the outbreak. They said it was “the solution that best protected the health of players and the overall integrity of the competition.”

Among the clubs also considering legal action were Elche, Rayo Vallecano and Numancia.

Elche temporarily grabbed the final spot for the promotion playoffs on Monday, but it will lose it if Fuenlabrada earns at least a draw in a rescheduled match against Deportivo, which will have only pride to play for.

Elche said in a statement the decision to postpone only Fuenlabrada-Deportivo “directly affected the integrity of the competition and was not fair.”

Rayo Vallecano also was fighting for a playoff spot and depended in part on Fuenlabrada’s result. Club president Raúl Martín Presa said the entire final round should be annulled.

Numancia played its match under protest because it said the fairness of the competition was not maintained.

Deportivo’s players released a statement on Tuesday saying they told a Spanish league official they shouldn’t be playing if all matches were not canceled.

“Everything that happened after the announcement that only our game was suspended has no validity determining the outcome of a competition that must always be decided on equal terms,” the statement said.

Deportivo coach Fernando Vázquez said his team’s rivals benefited because they didn’t have to deal with the pressure of Deportivo’s result. Vázquez said it was strange that the other matches were allowed to be played considering that Fuenlabrada hosted Elche just a few days ago and maybe players were already infected by then.

The announcement of the positive cases at Fuenlabrada, based just south of Madrid, came just hours before the final round was to start. The league did not say how many players or club members tested positive. The team said no one who tested positive showed symptoms of the disease.

Spain was one of the hardest-hit countries by the coronavirus. The pandemic had been under control but some surges of new cases have been reported recently.

Vázquez said it was “a little alarming” to see an outbreak affect the league after “we were all congratulating ourselves on how well we were doing as a society.”

There was no date set for the new game between Deportivo and Fuenlabrada. The promotion playoffs, which were expected to begin on Thursday, also have been delayed.

Deportivo played only one season in the third division, in 1980-81.