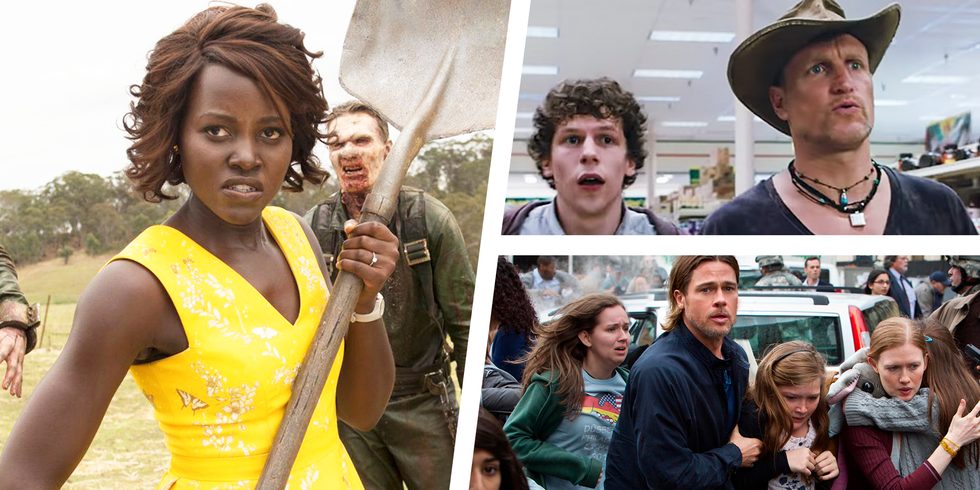 The 15 Best Zombie Movies of All Time

The 15 Best Zombie Movies of All Time

Zombie movies have been an important part of the horror field for a very long time, but the sub-genre has expanded to include picks that are comedic, action-heavy, and even romantic.

But if you’re wondering just why people find zombie movies so fascinating, Stanford literary scholar Angela Becerra Vidergar once explained that, “We use fictional narratives not only to emotionally cope with the possibility of impending doom, but even more importantly perhaps to work through the ethical and philosophical frameworks that were in many ways left shattered in the wake of WWII [when the genre became popular]…In a way, survivalism has become a dominant mode of self-reference for a greater number of people. You see that in the obsession in apocalypse and disaster in the fictional stories we tell.”

And while the current coronavirus pandemic has led many people to reach for happier, lighter movies to watch, there’s also a good reason why you’re reaching for your favorite post-apocalyptic flick: “There is this glimmer of hope that I am really interested in,” Vidergar explains. “Even if as a society we have lost a lot of our belief in a positive future and instead have more of an idea of a disaster to come, we still think that we are survivors, we still want to believe that we would survive.”

So if you’re looking for a new zombie flick to watch, we have some picks for you–here are the 15 best zombie movies of all time.

This South Korean film takes place on a train to Busan as a zombie apocalypse suddenly breaks out both in the country on the train, and the passengers have to figure out how to stay alive while also trying to find a safe station to stop the train. The movie’s sequel, Peninsula, will be released this year.

World War Z‘s power is in its realism, and the zombie outbreak is portrayed in locales worldwide from Newark, New Jersey to Cardiff, Wales. However, Brad Pitt is there to save the day as United Nations investigator Gerry Lane.

Woody Harrelson, Jesse Eisenberg, Emma Stone, and Abigail Breslin star in this comedic zombie tale about a group of survivors that try to find a sanctuary free from the zombies ravaging the nation. Expect funny gags, lots of zombie killings, and a cameo from a beloved actor—and if you need even more zombie in your life, check out the sequel Zombieland: Double Tap.

What do you get when you mix together Academy Award winner Lupita Nyong’o, a bunch of kindergarteners, and a sudden outbreak of zombies? Movie magic!

Night of the Living Dead

George A. Romero’s 1968 film revitalized both the horror and zombie genre and in 1999, the legendary film was added by the Library of Congress for preservation in the National Film Registry. However, there was a lot of controversy when Night of the Living Dead first premiered in theaters, primarily due to its realistic gore and scary plot line. The movie follows seven people who are trapped in a farmhouse in rural Pennsylvania while facing an attack from a group of undead corpses.

Dawn of the Dead

The classic 1978 film is the second entry in George A. Romero’s Night of the Living Dead series, and it follows a group of survivors as they barricade themselves inside a suburban shopping mall amidst a zombie outbreak. Unfortunately, the 70’s version isn’t available for streaming online but you can also check out the 2004 remake.

This film was ranked on the top 100 list of the best British films ever, and it follows a group of four survivors as they struggle to cope with their new reality after a zombie outbreak starts when a group of animal activists release a chimpanzee infected a contagious rabies-like virus. It was later followed by a sequel titled 28 Weeks Later.

Warm Bodies will truly make you believe that you can find love anywhere—even in the middle of a post-apocalyptic zombie-infested world.

Shaun of the Dead

This film is definitely for viewers that like some laughs with their zombie flicks, and Shaun of the Dead includes references to Night of the Living Dead, Dawn of the Dead, and 28 Days Later.

The Cabin in the Woods

This movies follows a group of college kids (including Chris Hemsworth and Jesse Williams) as they spend a weekend in a remote forest cabin. What they don’t know is that engineers are remotely controlling the cabin from a secret lab, and they soon fall victim to the zombies surrounding the property.

Maggie follows Arnold Schwarzenegger as father that finds it hard to cope after his daughter (played by Abigail Breslin) is bitten by a zombie during a countrywide zombie outbreak.

Based on the video game franchise of the same name, Resident Evil films follow former security specialist and covert operative Alice (Milla Jovovich) as she fights against the Umbrella Corporation, whose powerful bioweapons have triggered a zombie apocalypse. Fun fact—The Resident Evil film series has grossed over $1 billion worldwide, making it the highest-grossing film series based on a video game.

After a plague-like virus that turns its victims into zombies sweeps through Europe, 75% of said victims are captured, treated, cured, and then released back into society. However, 25% of the infected are resistant to treatment, and the government is eager to get rid of them.

Return of the Living Dead

The 1985 film follows a group of people in Louisville, Kentucky, (including some rowdy teenagers) as they deal with the accidental release of zombies in their town. Return of the Living Dead is notable because the zombies in the film eat brains instead of flesh, and its the first known film to show zombies that can run and speak. The movie also led to four sequels, with the most recent one being released in 2005.