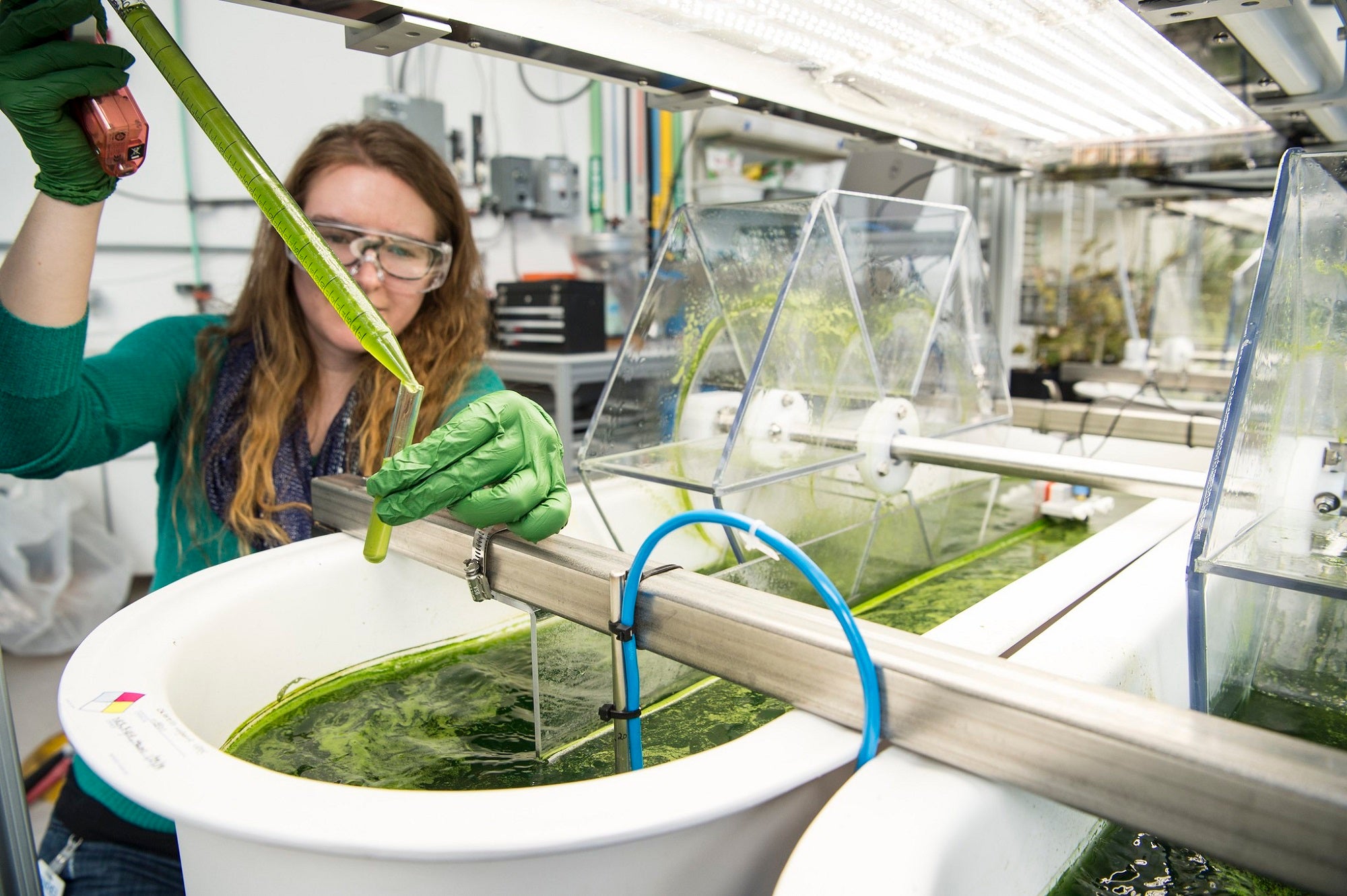 The cost of algae-based biofuel is still too high

The cost of algae-based biofuel is still too high

As the US tries to move toward a clean energy economy and net-zero carbon emissions by 2050, it seems that biofuels are having their moment. These renewably sourced liquids could be a direct substitute of energy for petroleum-guzzling cars or industrial processes without necessarily needing to change the entire infrastructure of the power grid.

In particular, it seems the government is upping its focus on the green goo that could satisfy some of Americans’ energy needs: algae.

Earlier in February, the Department of Energy’s Bioenergy Technologies Office (BETO) announced a new round of funding worth $19 million for projects that can increase the capabilities of working algal systems to capture carbon dioxide. The goals are two-fold: to reduce greenhouse gas emissions and to cultivate algae for biofuels and other bioproducts.

This announcement builds on previous years’ funding, including a round of grants totaling $8 million released in summer of 2021. Though these numbers pale in comparison to the Department of Energy’s total 2022 budget of $40.3 billion, algae bioenergy seems to be a growing interest—there’s even a new student competition to innovate with the water-based organisms.

The ultimate target, says Schonna Manning, a research assistant professor in molecular biosciences at the University of Texas at Austin, is to displace the reliance on fossil fuels by using bioenergy instead. Manning is also the director of research and development of the university’s culture collection of algae, which sells its stock to aquaculture and biotech companies, as well as individual researchers and small business owners. But as she points out, there are several obstacles at different stages of algae production, from cultivation to harvest to downstream operations for converting the organisms into market-ready products.

Technically, most mainstream energy already comes from algae. The crude oil that gives the fossil fuel industry its power is a result of ancient algal deposits. After millions of years of heat and pressure, marine life such as plants and eukaryotes transformed into the hydrocarbons that make up petroleum today. But engineering algae to produce oil on demand could provide a less carbon-intensive solution to energy needs. The grant-winning projects represent a whole range of approaches, including utilizing algae from direct air capture and feed stock for animals.

At the Arizona Center for Algae Technological Innovation at Arizona State University, large open raceway ponds are used to cultivate algae. The algae technology is used to create renewable products such as biofuels, plastic alternatives, and nutraceuticals, which are nutritious food products that can also be used as medicinal products, similar to green tea and ginseng.

One of the key problems that Manning cites is that though these ponds may look dense like pea soup, the algae only makes up one percent of the total volume of the pond. The rest of the floating biomass is water. This presents one of the primary challenges in large-scale cultivation of algae: To produce a high density, a lot of water needs to be removed from the equation (much of which is eventually reused in the system). From Manning’s estimate, the harvesting and dewatering process can take up 70 percent of capital costs.

In search of a solution, the engineers at the Pacific Northwest National Laboratory took inspiration from Earth’s processes and came up with a fuel-forming method called hydrothermal liquefaction. Instead of extracting the oil separately, they cook the algae, proteins and all, at incredibly high temperatures and pressures to mimic how petroleum is formed underwater. Though only conducted at small scales so far, this could be one proposed solution to skip the expensive dehydration costs.

Another newly funded project at Illinois Sustainable Technology Center aims to reduce cultivation and resource costs by using carbon dioxide from the flue gas emitted by a nearby power plant, along with nutrients from wastewater treatment plants. The system, which will be situated within the City Water, Light, and Power plant in Springfield, Illinois, aims to grow algae as an alternative for animal feed.

According to Josh McCann, an animal science assistant professor at the University of Illinois Urbana-Champaign who is a part of the Springfield project, protein is one of the most expensive macromolecules in feed. If the algae turns out to be cost competitive with the more established feeds, then it could be a cheap but high-quality choice for livestock producers.

McCann notes that since livestock are one of the least fussy consumers, the question isn’t whether the animals will consume the algae. It’s more so about whether the algae can be produced at a low enough cost for the nutrition it provides. McCann hopes that the unique approach of this growing project will make up for some of those concerns. By creating a protein-rich alternative, algae feedstocks may be able to displace soy and other traditional ingredients that require a disproportionate amount of land and water to grow. The researchers are expecting their first yields this spring, after which McCann will conduct analyses to value the nutrient levels of the algae and price it accordingly for agricultural sales.

Meanwhile, cost remains a cumbersome factor for algae-based biofuel too. Price estimates range depending on the producer and the scale, but so far nothing is close enough to compete with the current national average of $3.53 a gallon of gasoline at pumps. One project, the Marine Algae Industrialisation Consortium at Duke University, is trying to produce algae biofuel for $5 per gallon at commercial scale.

Though there isn’t conclusive evidence to prove that algae biofuels emit less greenhouse gasses than fossil fuels when burned, its net carbon dioxide product is less than traditional fuels. One kilogram of algae consumes roughly 1.8 kilograms of carbon dioxide to grow; in comparison, a mature tree absorbs around 22 kilograms of carbon dioxide a year. Additionally, the photosynthesizing organisms don’t need freshwater or arable land to grow, lessening the demand on increasingly scarce natural resources.

But before they can produce biofuels, the tiny droplets of oil found in algae need to be harvested. These cells are about 10 microns or 0.001 millimeters wide, according to Manning.

Sometimes to increase these lipid stores, the algae is put under stress or starvation, which causes the oil yield to increase. Growers can push the levels up by holding back nutrients like sulfur and nitrogen or increasing temperature and light. The particular species of algae plays a role as well.

All of which is say, the great experiment(s) will continue. While the US has been tinkering with industrial-grade algae for decades, the recent push from BETO adds new urgency to the field. “Algae technology provides not only an exceptional carbon sink, but a versatile material product, which offers solutions to sustainability challenges from fuel to plastics,” the Office of Energy Efficiency and Renewable Energy stated in a press release about the recent stream of grants. But until costs come down, these ideas will be stuck in labs and raceway ponds—and nothing more.