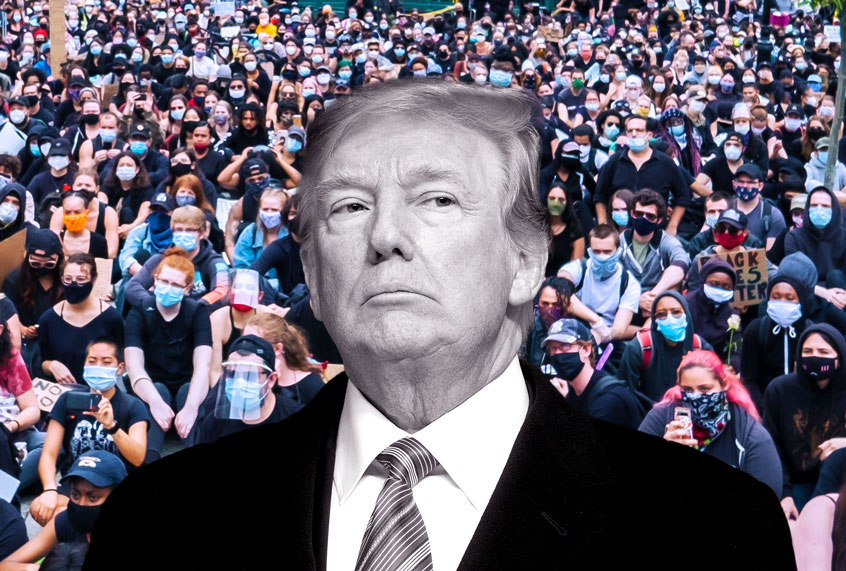 Trump is daring us to stop him

Trump is daring us to stop him

This article was produced by Economy for All, a project of the Independent Media Institute.

President Donald Trump’s recent reelection campaign advertisement is straight out of the plot of a horror movie. Just days after he deployed federal officers to the streets of Portland, Oregon, his campaign released a 30-second television spot featuring an elderly white woman watching on her television the news of activists demanding a defunding of police. The woman shakes her head in disapproval as she notices a figure at her door trying to enter her house. She nervously calls 911, but apparently the activists she disapproves of have been so effective in their nefarious demands that the universal emergency hotline Americans rely on now goes unanswered. The vulnerable woman drops her remote control as the intruder enters her home, and we are only left to imagine the horror of what he does to her as the words “You won’t be safe in Joe Biden’s America” appear on the screen. In this dystopian version of America, only Trump promises law and order.

Trump has repeatedly claimed that Biden, the presumptive Democratic presidential nominee, supports the defunding of American police. He does not, and in fact, in keeping with his historic support for police, Biden has demanded increased funding for law enforcement. But Trump has already proven that he will not let truth get in the way of his desires, and therefore a little more digging on the part of voters and a little more forthright reporting on the part of journalists is necessary to understand exactly who is breaking American laws.

The paramilitary units from the Department of Homeland Security (DHS) that Trump has deployed to Portland have engaged in disturbing violations of human rights. They have used munitions to injure people, and acted like “thugs and goons” in the words of a Navy Veteran who was beaten with batons and pepper-sprayed in the face. They have arrested and detained people without documentation. Trump has defended their tactics saying the targets “are anarchists. These are not protesters… These are people that hate our country.”

Acting Homeland Security Secretary Director Chad Wolf took Trump’s characterization of protesters as “anarchists” to comical extremes in his public record of how and why his officers engaged with protesters. Saying that he “Condemns The Rampant Long-Lasting Violence In Portland,” Wolf used the words “violent” 76 times to describe what protesters have done to justify arrests and repression. Wolf’s definition of violence seems to almost entirely encompass property damage such as vandalism and graffiti. The closest that Portland protesters came to actual violence, it seems, was when they apparently, “attempted to cause eye damage to officers with commercial grade lasers,” and in another instance, “proceeded to launch aerial fireworks at federal property.”

The DHS records used the term “violent anarchists” 70 times and the term “protesters” only once, without making any effort to explain how exactly they distinguished “violent anarchists” from protesters, journalists or passersby. Nowhere in the document was there any documented behavior by protesters that came close to an attack on vulnerable elderly white women like the fictitious one in Trump’s ad. In not a single instance reported in the DHS account did a protester — or in Wolf’s words, violent anarchist — actually commit intentional violence against a human being.

Trump’s policy violates an idea that Republicans have long supported — that states ought to have the right to set their own laws and rules and that the federal government ought to respect that right. It also goes against the warnings that pro-gun Republicans have echoed for years — that mass gun ownership is necessary so that vigilant citizens can counter federal government tyranny of the sort that Trump has unleashed. Now that the kind of federal government overreach they have warned against for years is actually unfolding, there is nary a peep from the “gun rights” crowd.

It isn’t just Republicans who have embraced the march toward authoritarianism. Eighteen years ago Congress passed the Homeland Security Act to create the DHS — an agency with an Orwellian name — with 88 Democrats joining more than 200 Republicans in voting yes. The September 11, 2001, terrorist attacks prompted a reconfiguring of American society and government that reverberates today, unleashing excessive surveillance and harsh immigration enforcement, while doing little to address the factors that provoked the attacks on the World Trade Center and Pentagon in the first place.

Yet year after year, Democrats have voted to reauthorize the USA Patriot Act and other aspects of the post-9/11 authoritarian architecture. Now even as DHS officers are being deployed by a president they strongly criticize, Democratic lawmakers are trying to tie up funding for the DHS with that of the Department of Health and Human Services, which, according to the Intercept’s Ryan Grim, is “making it more difficult for progressive Democrats to oppose.”

But Trump has abused the infrastructure of the post-9/11 state repression to a far greater extent than either Presidents George W. Bush or President Barack Obama. The Washington Post reported that Tom Ridge, the notorious DHS secretary under Bush, denounced Trump’s move saying the agency was formed to counter “global terrorism,” and that, “It was not established to be the president’s personal militia.” A former Bush-era DHS official, Paul Rosenzweig, characterized the deployment as “lawful but awful,” while seeing the phenomenon as clearly unconstitutional. Michael Chertoff, another Bush-era DHS secretary, told a Washington Post columnist, “While it’s appropriate for DHS to protect federal property, that is not an excuse to range more widely in a city and to conduct police operations, particularly if local authorities have not requested federal assistance.” Chertoff added that Trump’s move is “very problematic,” and “very unsettling.” If those GOP officials who served under Bush — who were considered the political villains of their time — are disturbed, Trump has indeed crossed a line.

But another figure from the Bush years is rearing his head under Trump and encouraging his authoritarianism. John Yoo, the infamous lawyer who helped craft the “torture memos” during the Bush administration’s “war on terror” to justify the CIA’s use of torture during interrogations, is apparently advising the Trump administration on how best to use his executive power to skirt congressional authority, the Guardian reports. In June, Yoo wrote in an article in the National Review, “Even if Trump knew that his scheme lacked legal authority, he could get away with it for the length of his presidency.”

Trump has made clear that norms, ethics, laws, and even the U.S. Constitution are merely suggestions that mildly constrain him and that can be tossed aside when needed. His modus operandi is to push the limits of what he can do and dare the nation to stop him. Will we?