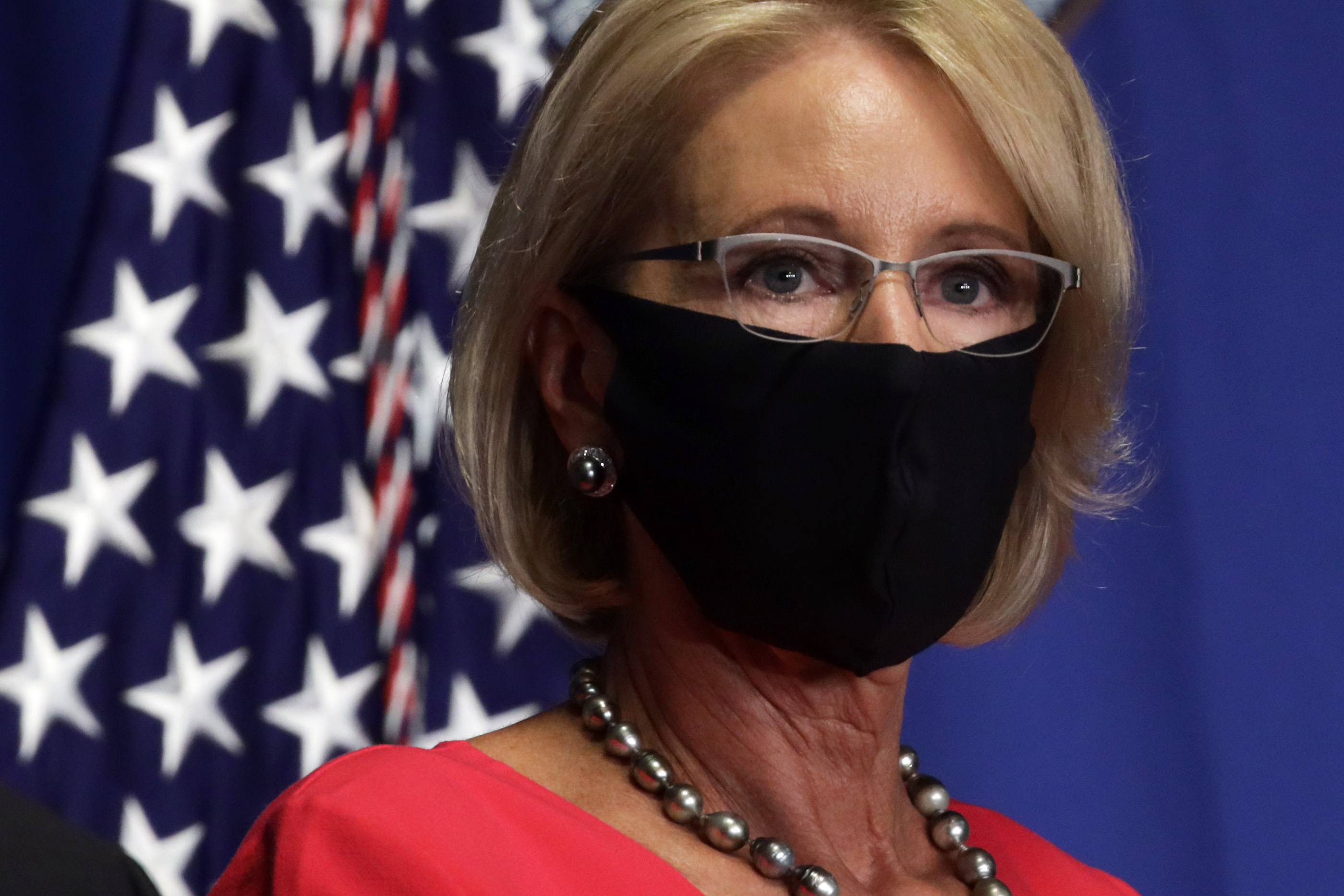 Betsy DeVos’s Plot to Enrich Private Schools Amid the Pandemic

Betsy DeVos’s Plot to Enrich Private Schools Amid the Pandemic

How much more does the Trump administration value the children of elite private and religious schools than the children who attend public schools? We can answer the question with some hard numbers. Public school students merit something like $266 apiece in extra pandemic-related funding. Kids attending the right private schools are worth $5,000 each or possibly much more.

That $266, by the way, is an overestimate. It’s what you get when you take the $13.5 billion allocated for K-12 education in the Coronavirus Aid, Relief, and Economic Security (CARES) Act of this past March and divide it up among the nation’s 50.8 million public school students. Secretary of Education Betsy DeVos made sure to siphon some of that money for private and religious schools, which she has long favored, although she did receive pushback: On July 22, the National Association for the Advancement of Colored People (NAACP), joined by school districts in California, Connecticut, and Colorado, sued DeVos and her department over the policy, calling it “as immoral as it is illegal.”

Daniel A. Domenech, executive director of the School Superintendents Association, described her efforts as “an opportunistic money grab, using the pandemic environment to advance the privatization agenda.” And yet, if we take a closer look, the manipulation of the school-funding portion of the CARES Act was just one piece of the great private-school bailout of 2020.

The $5,000 per student figure for some private schools cited above comes out of the Paycheck Protection Program, which was established by the CARES Act and implemented by the Small Business Administration. Public schools aren’t eligible for PPP money, which is technically a loan but will be forgiven if the funds are used for expenses that meet certain criteria. Although the SBA does not disclose exact loan amounts, it does make public the recipients receiving more than $150,000 and identifies amounts within broad ranges.

With this information, we know that Buckingham Browne & Nichols School, a private pre-K–12 school in Cambridge, Massachusetts, with a $75 million endowment and a student body of around 1,013, where annual tuition runs up to $52,300, collected a loan of between $5 and $10 million—or roughly $5,000 to $10,000 per student. (The school did not respond to multiple requests to confirm the exact amount.)

Saint Ann’s School in Brooklyn, a private pre-K–12 school of around 1,090 pupils that does not grade its students but has nevertheless been wildly successful in placing graduates at highly selective colleges, received a loan within the same range, picking up a minimum of $4,587 and up to $9,174 per student. (The school also did not respond to requests to confirm the exact amount.)

Georgetown Preparatory School, which serves about 500 students on 93 acres in North Bethesda, Maryland, and whose notable alumni include Supreme Court Justices Neil Gorsuch and Brett Kavanaugh, collected a $2.7 million PPP loan, which works out to $5,440 per student. According to an analysis by Americans United for Separation of Church and State, the total amount of large PPP loans given to private and religious schools was at least $2.67 billion and as much as $6.47 billion—or about half as much as the total for all schools under the CARES Act, even though private and religious schools educate only 10 percent of the nation’s schoolchildren.

And these schools could potentially receive even more. DeVos stuffed a provision in the CARES Act for “equitable services” that may send another $1.35 billion, which might otherwise have gone to public schools, to private schools. She’s also giving them a cut of the $3 billion Governor’s Emergency Education Relief Fund.

Many of the private schools getting PPP money are already receiving substantial amounts of taxpayer funds through voucher programs. The flow is poised to dramatically increase, thanks to the Supreme Court decision in Espinoza v. Montana Department of Revenue, which barred Montana from excluding religious schools from a program that directs taxpayer funds to private schools through tuition grants to parents. In a certain sense, some private schools are starting to be treated like public schools: taxpayer-funded, only with much more money, fewer restrictions on who and how they must serve, and much less public oversight.

The religious school beneficiaries remain free, as they always have been, of the anti-discrimination laws that apply to public schools. For example, Cathedral High School in Indiana took in a PPP loan of between $2 and $5 million ($1,700 to $4,200 per student), but it fired a teacher for having a same-sex spouse. The Foundation Academy in Winter Garden, Florida, whose 2016-17 handbook informs school families that the husband “has the God-given responsibility to provide for, to protect, and to lead his family” while “a wife is to submit herself graciously” and which groups “homosexuality, lesbianism bisexuality” along with “bestiality” as grounds for expulsion, took in between $1 and $2 million in PPP money. Americans United estimates that at least 4,006 religious schools, or about 70 percent of private school recipients, received large PPP loans.

There is no indication, however, that the private schools receiving PPP money are under anything like the pressure the Trump administration is applying to public schools to fully reopen in the coming school year. When Fairfax County public schools offered parents a choice between in-person and remote learning, DeVos denounced the move in vehement terms. (The district has since announced that the 2020-21 school year will be fully remote.) But the Fairmont Preparatory Academy of Anaheim, California, which took in a minimum of $5 million, or $7,700 per student in PPP money, is offering families the same choice, so far with no criticism from the Department of Education.

Republican proposals for emergency school funding reflect a fundamental prioritization of private over public education. The private regime has much more flexibility and many more resources; the public regime has far less money and fewer choices. Under the Republicans’ proposed bill, public schools would potentially receive billions of dollars in aid—about $1,200 per student. But the money comes with strings attached: Only public schools offering in-person classes, which pose a greater risk, would qualify for the funding. Meanwhile, private schools have their money as well as the freedom to decide how they may best deliver an education.

The Trump administration’s grotesque efforts to take money out of the schools that educate the overwhelming majority of American children in order to subsidize the disproportionately wealthy percentage of children who attend private schools should make the blood boil. And yet, this is much more than just another story about waste and corruption.

Betsy DeVos did not take over the Department of Education in order to improve public education as we know it but to degrade it. She came to office with an ideology as simple as it is destructive: Government should get out of the business of education, she has consistently maintained. DeVos brought with her two powerful interest groups. On the one hand are the privatizers, on the other are the proselytizers, and both paws are reaching for the same pot of taxpayer money.

In a May radio interview, Cardinal Timothy Dolan, the Catholic archbishop of New York, asked DeVos whether she was trying to “utilize this particular crisis to ensure that justice is finally done.” “Yes, absolutely,” she replied. Alluding to her longstanding efforts to divert taxpayer money to sectarian schools, DeVos said, “For more than three decades that has been something that I’m passionate about.”

The public has consistently underestimated the extremity of the agenda against public schooling. Listen more carefully to what DeVos and her backers are actually saying. For decades, Christian nationalist leaders have denounced public schools as hotbeds of secularism. For just as long, reactionary economic ideologues have condemned them as breeding grounds for socialism. DeVos’s boss simply repeats the message at a louder volume: During his Fourth of July speech at Mount Rushmore, Donald Trump said public schools are teaching kids to “hate our country” with a “far-left fascism that demands absolute allegiance.” They all understand at some level that a robust public school system is one of the pillars of a modern, progressive, pluralistic, and democratic society. That’s why they want to destroy it.