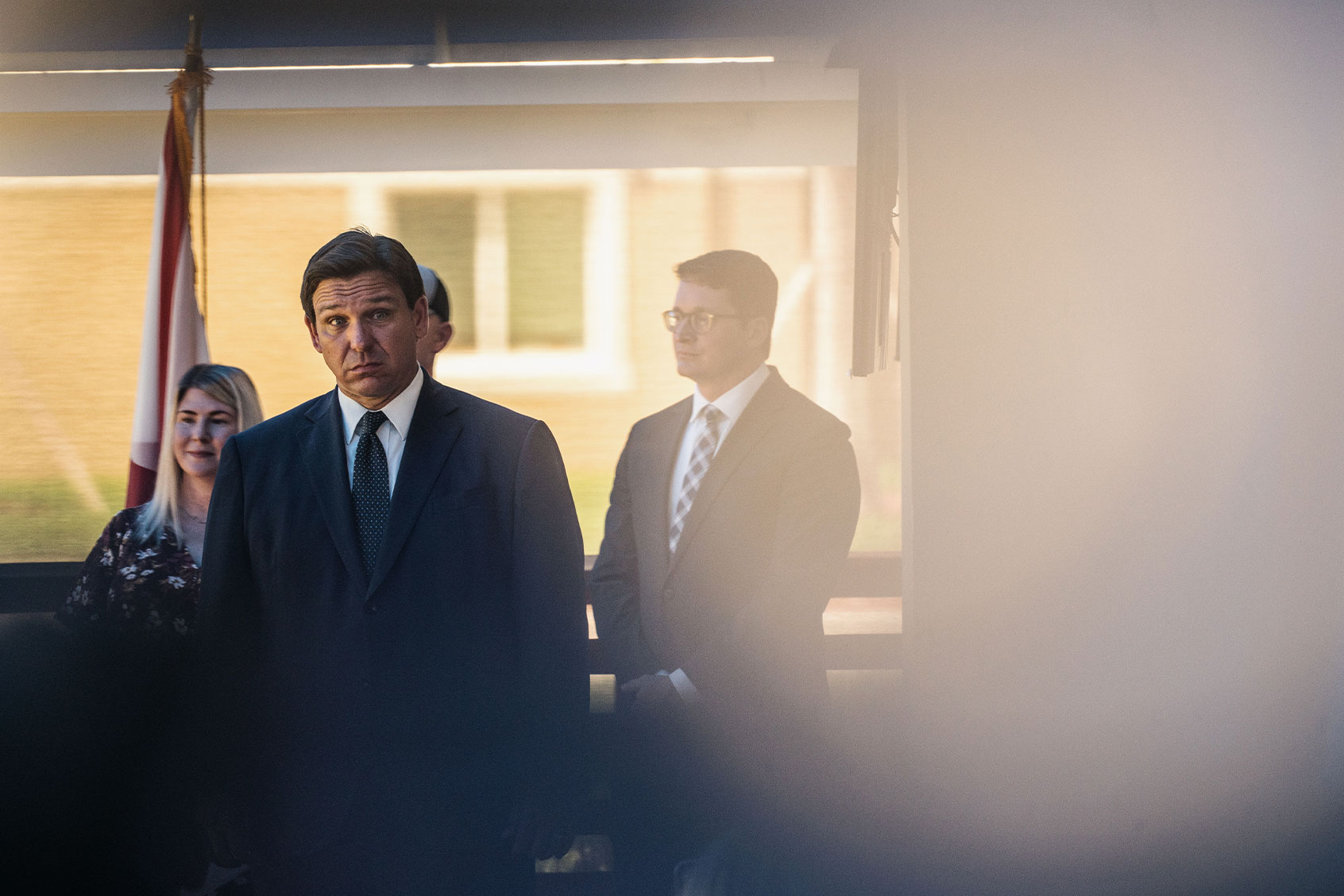 The woman, who was identified by The New York Times and CNN as Perla Huerta, was accused of luring 48 migrants onto two private planes in Texas, making false promises about offering asylum-seekers expedited work permits, housing and cash assistance. But instead, dozens of migrants were left to fend for themselves and were later moved to a military base shelter at Cape Cod.

Attorneys for the migrants have filed a class action lawsuit for defrauding vulnerable immigrants by making “false promises and misrepresentations” to advance a political motive. The lawsuit was filed against DeSantis, Florida Department of Transportation Secretary Jared Perdue, the state of Florida and the state Department of Transportation. Once the attorneys confirm Perla’s identity, they said they will also add her to the lawsuit.

The lawsuit alleges that Huerta gathered the group to have them “sign a document in order to receive a $10 McDonald’s gift card” and did not explain what the document stated. “[A]n entire paragraph about liability and transport was not translated at all, and language specifying that the journey would take place from Texas to Massachusetts was not translated at all either.”

Huerta served in the US Army for more than two decades with several deployments to Iraq and Afghanistan, according to the Times. She was discharged in August and lives in Tampa, Florida.

A man who called himself Emmanuel told the San Antonio Report that Perla said she wanted to get migrants to “sanctuary states” where more government support would be available to them.

“A lot of people really come without plans, they want to come and just work and they have a hand that’ll provide them shelter,” he told the San Antonio Report. “I just saw it in that way, like a sweet way, doing it for good.”

He added that Perla told him the money being offered to him came from an “anonymous benefactor,” and the same person was also funding the flight.

DeSantis, who has taken credit for those flights, used the money that came from a special $12 million appropriation in the state’s last budget.

“I can confirm the two planes with illegal immigrants that arrived in Martha’s Vineyard today were part of the state’s relocation program to transport illegal immigrants to sanctuary destinations,” a statement from DeSantis’ communications director Taryn Fenske said. “States like Massachusetts, New York, and California will better facilitate the care of these individuals who they have invited into our country by incentivizing illegal immigration through their designation as “sanctuary states” and support for the Biden Administration’s open border policies.”

The airline charter company Vertol Systems received $615,000 on Sept. 8 and $950,000 less than two weeks later, for “project 1” and “projects two and three,” according to Florida state records reported by the Times. The company has ties to several high-profile Florida Republicans, including Rep. Matt Gaetz, R-Fla., and Larry Keefe, DeSantis’ public safety and immigration czar.

Now, another group of migrants is reportedly being transported from New York City to Florida for work supporting cleanup efforts after Hurricane Ian devastated the state.

“They want us for hurricane cleanup, we’d get paid $15 an hour, overtime and $15 for food daily, I think,” Javier Moreno, 37, told the New York Post. He added that a woman named Camila “from an organization” approached him with a flier.

Another migrant said that about 100 people had left a shelter in Manhattan to take advantage of the work offer.

​​A representative for FEMA told The New York Post that the agency was not involved in any efforts to transport migrants and a spokesperson for Mayor Eric Adams also said the same.