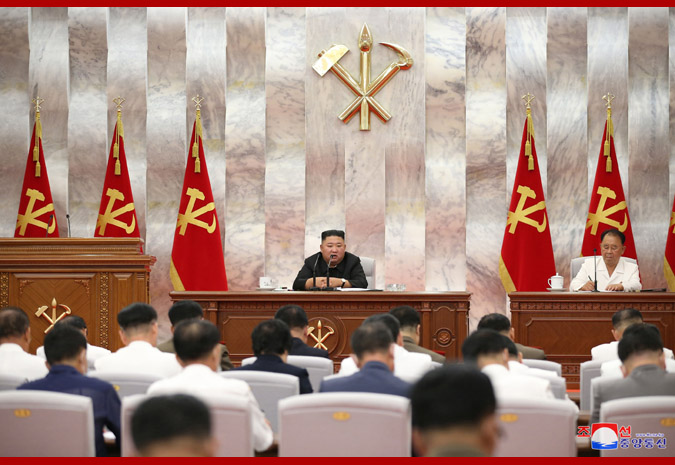 North Korean supreme leader Kim Jong Un has praised the disaster relief efforts of his armed forces in the wake of a typhoon that has battered the small, militarized state ahead of an anniversary marked by warm words from world leaders.

After touring flood-hit sites over the weekend, Kim chaired on Tuesday the sixth enlarged meeting of the ruling Korean Workers’ Party’s Seventh Central Military Commission in Pyongyang in order to discuss “severe damage” dealt to the Komdok area of South Hamgyong Province by a major storm termed “Typhoon No. 9.” The devastation was enough to force the ruler to rethink his year-end goals ahead of the upcoming, highly-anticipated Eighth Pary Congress set for January.

“The Supreme Leader said that due to the unexpected damage by typhoon we are faced with the situation in which we cannot help but change the direction of our struggle after comprehensively considering the year-end tasks that were under way with the nation-wide efforts,” the official Korean Central News Agency reported.

Early reports indicated the typhoon wrecked some 2,000 homes and tens of public buildings, swept away more than 37 miles of roadway in 45 places, destroyed 59 bridges and two miles of railway roadbeds in 31 places and thousands of feet of rails of two places.

Major mining sites such as the Komdok Mining Complex, the Taehung Youth Hero Mine, the Ryongyang Mine and the Paekbawi Mine were badly affected, “leading to the state of emergency of total paralysis of transport system.” In Komdok, a dam collapsed allowing rushing waters to carry out critical equipment.

Kim is relying on his country’s massive military to assist in clean-up and recovery efforts. He called on personnel to “work with devotion for our great people, great Party and great state as befits the reliable revolutionary armed forces of the WPK and thus successfully complete their sacred combat mission” ahead of January’s gathering, or even before Party Foundation Day just a month away.

Kim promised to emerge as “honorable victors under the banner of great tradition of single-minded unity and army-people unity however wild nature might be and how manifold challenges and trials may hold us back.”

The latest blow to North Korea comes amid a series of setbacks to Kim Jong Un’s five-year plan determined at the last national Korean Workers’ Party congress in 2016. Failure to reach a peace deal with the United States has left international sanctions against North Korea intact and the novel coronavirus pandemic has shocked the elusive nation’s already precarious economic standing.

In the midst of these hardships, Kim Jong Un has delegated some top officials, including his sister, to help steer the country toward success, as Newsweek recently reported.

But even as the country was still reeling from a new travesty, North Korea commemorated on Tuesday its 72nd Day of the Foundation of the Republic. Several world leaders took the opportunity on this occasion to send greetings to Kim.

President Vladimir Putin of Russia, North Korea’s other neighbor, also reached out. He their bilateral relations “have been of friendly and good-neighborly nature traditionally, and the constructive bilateral dialogue and beneficial cooperation in various fields are in conformity with the interests of the peoples of the two countries and contribute to promoting security and stability in the Korean Peninsula and throughout the Northeast Asian region.”

China and Russia were North Korea’s allies in its 1950s conflict with U.S.-backed South Korea, a war that has not technically ended. Today, they too call on Pyongyang to denuclearize but are pushing for Washington to offer more and avoid threats amid what has become a mostly stalled peace process.

While tensions have returned to the Korean Peninsula, President Donald Trump has touted warm ties with Kim, portraying this as a sign of his diplomatic skill in the face of political opponents such as former Secretary of State Hillary Clinton and former Vice President Joe Biden.

“That would be a very messy war, a very bad war. Many millions of people would be killed,” he added. “In the meantime, we’ve gotten along with them. We didn’t get to war. Everyone said that if I was elected, I’d be at war in one week; it’s been just the opposite.”