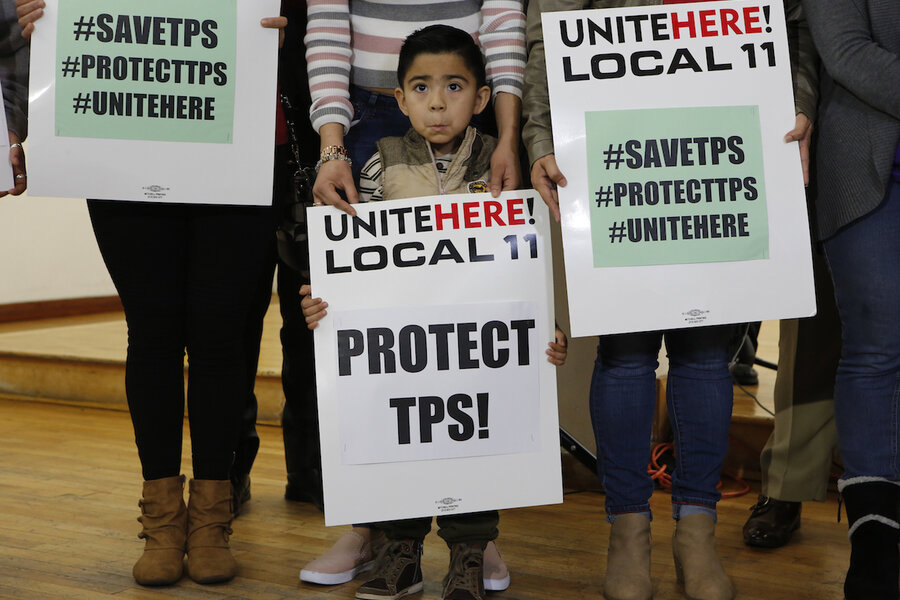 The Trump administration can end humanitarian protections that have allowed hundreds of thousands of people from El Salvador, Nicaragua, Haiti, and Sudan to remain in the United States, a divided appeals court ruled Monday.

While an appeal is imminent and orders to leave wouldn’t take effect for months, the decision moved many people closer to losing legal status, including families who have been in the U.S. for decades and have young children who are American citizens.

The 9th U.S. Circuit Court of Appeals lifted a preliminary injunction that blocked the government from ending Temporary Protected Status (TPS) for people from those four countries that are affected by natural disasters and civil conflict.

The order also applies to beneficiaries from Honduras and Nepal, who sued separately but are subject to Monday’s ruling under an agreement between attorneys for both sides, said Ahilan Arulanantham, a lawyer for the American Civil Liberties Union of Southern California, who argued on behalf of TPS holders.

Since 1990, the policy has granted temporary legal status, which is often extended. But the Trump administration decided to end it for several countries, saying the conditions that justified protections in America no longer exist.

That decision had been on hold even as President Donald Trump moved to restrict other forms of humanitarian status in the U.S., such as refugee resettlement and access to asylum.

A three-judge 9th Circuit panel in Pasadena, California, rejected arguments that the administration failed to follow proper procedures and that racially motivated comments by the president and his aides about some of the countries drove the decision to end TPS. The ACLU noted that in 2017, Mr. Trump said recent immigrants from Haiti “all have AIDS” and that Nigerians, once seeing the U.S., would never “go back to their huts” in Africa.

White House pressure on Homeland Security leaders to end TPS didn’t prove racial motivation, and was “neither unusual nor improper,” wrote Judge Consuelo Callahan, who was appointed by President George W. Bush. She noted that the administration extended TPS for other non-white, non-European countries.

“While we do not condone the offensive and disparaging nature of the president’s remarks, we find it instructive that these statements occurred primarily in contexts removed from and unrelated to TPS policy or decisions,” Judge Callahan wrote.

The ACLU will appeal to the full 9th Circuit and, depending on the outcome, may ask the Supreme Court to take the case, Mr. Arulanantham said.

“If the decision stands, these longtime lawful residents who were welcomed to the U.S. because their countries were mired in violence or natural disasters could be sent back,” the ACLU said. “Because they have several hundred thousand American children – many of whom are school-aged – this decision would force those families to be torn apart.”

The Justice Department welcomed the decision, saying allegations that TPS decisions were motivated by race were baseless.

People from Honduras, Nepal, Haiti, Nicaragua, and Sudan could be forced to leave as early as March 5, Mr. Arulanantham said.

Salvadorans would have until Nov. 5, 2021, under a separate pact between the U.S. and Salvadoran governments.

The ultimate outcome may hinge on the presidential election. Mr. Trump’s Democratic challenger Joe Biden promises “an immediate review” of TPS and said he will pursue legislation for longtime residents to remain in the U.S. and seek citizenship.

More than 400,000 people from 10 countries have the protected status, including some 250,000 from El Salvador, according to the Congressional Research Service. El Salvador first got TPS in 2001 after earthquakes displaced much of the population.

Salvadoran President Nayib Bukele, who has worked closely with Mr. Trump on immigration, wrote on Twitter after the ruling that there is “enough time to ask our allies for a permanent solution, or at least another temporary solution.”

“This is devastating news not just for families who are losing their protected status, but also for their communities,” said Ali Noorani, president of the National Immigration Forum. “TPS recipients have deep economic and social roots in communities across the nation.”