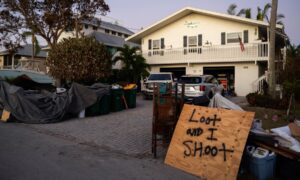 As parts of Florida face a long road to recovery following extraordinary damage caused by Hurricane Ian, some people have already been taking advantage of the situation and started looting amid the chaos.

William Snyder, the sheriff of Martin County, told TCPalm that he doesn’t expect looters to calm down, fearing the worst. He said looters already went on a spree of stealing and ransacking structures “very early” after the Category 4 storm made landfall in western Florida last week.

“It was very early and some of the looting was starting already, but it will get progressively worse, I think, as people become more desperate,” Snyder, who was dispatched as part of a 15-person rapid response team on Sept. 30 to assist in the aftermath of Hurricane Ian in Charlotte County, told the publication.

Shortly after the team’s arrival in Charlotte, officials encountered “dazed” residents, as well as several “pretty sketchy people” looking for water, food, and fuel, but nobody was arrested at the time.

However, sometime later, Snyder received reports of people stealing gas-powered generators that were supposed to be powering traffic control devices.

“When they bolted those down, they chained them down, they started stealing the gas out of the generators,” the sheriff told TCPalm.

A day after the team’s arrival, they received a report about a house that was burning after the homeowner put a generator in the garage because he was so fearful that looters would steal their backup generator. The house was a total loss, Snyder said.

“The challenge that stuck out to me the most was just how fragile society is when electricity and water go,” the sheriff added. “No gas, no electric, no water, and everything starts to come to a stop.”

‘We Have Law and Order’

In nearby Lee County, Sheriff Carmine Marceno issued a stark warning to would-be-looters after a group of four people—including three illegal immigrants—were arrested on Sept. 29 for taking advantage of the situation.

Marceno added that three of the arrested individuals—Robert Mena, Brandon Araya, and Stephen Araya—were illegally inside the United States while they were caught looting in Lee County.

“I can tell you, in the state of Florida, you never know what may be lurking behind somebody’s home, and I would not wanna chance that if I were you, given that we’re a Second Amendment state,” DeSantis said, who noted that some Floridians have firearms.

Some residents also “boarded up all the businesses, and there are people that wrote on their plywood, ‘you loot, we shoot,’” DeSantis added. “At the end of the day, we are not going to allow lawlessness to take advantage of this situation.”