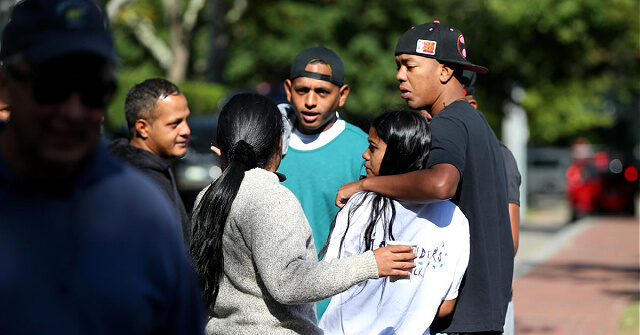 NBC News quoted a member of a foundation that assists refugees who compared the migrants who landed in Martha’s Vineyard this week to “trash” in a since-deleted tweet.

The corporate media outlet posted an article about how the migrants, who are primarily Venezuelan, are dividing the Venezuelan-American community.

“Florida Gov. DeSantis sending asylum-seekers to Martha’s Vineyard is like ‘me taking my trash out and just driving to different areas where I live and just throwing my trash there,’ a founding member of a foundation that helps refugees says,” the tweet said.

NBC News just deleted this article on Twitter in which they compare migrants to “trash” pic.twitter.com/4zk8D7ktsb

The quote came from Max Lefeld, a Venezuelan-American advertising executive who spoke candidly about Florida Gov. Ron DeSantis’s (R) decision to send the migrants to the “sanctuary destination” of Martha’s Vineyard.

“Didn’t think that one through, did ya?” Breitbart News’s Kristina Wong tweeted after the outlet deleted its tweet.

Although the tweet comparing migrants to trash was deleted, the quote remains prominently featured in the article’s second paragraph.

“No worries. Quote and story are still there,” Stephen L. Miller pointed out.

No worries. Quote and story are still there. https://t.co/1NCXkaXVG0 pic.twitter.com/XFv7VZTRgg

NBC’s story on the migrants’ impact on the Venezuelan-American community came after DeSantis sent 50 migrants to Martha’s Vineyard earlier in the week.

“States like Massachusetts, New York and California will better facilitate the care of these individuals who they have invited into our country by incentivizing illegal immigration through their designation as ‘sanctuary states’ and support for the Biden administration’s open border policies,” Desantis’s communications director Taryn Fenske told Fox News on Wednesday.

Editor’s note: This story has been updated to clarify that NBC News was quoting a member of a foundation that assists refugees.